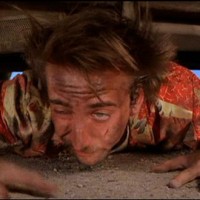 It’s easier to understand the Coen brothers’ second film, Raising Arizona, now, more than two decades later. Because now we have other peculiar comic gems from the brothers; films such as The Big Lebowski or last year’s Burn After Reading.

It’s funny to read Roger Ebert’s review of the film from the same year it was released. He complains about the strange manner of talking that the characters all share – as though they are culled from a pool of quirky characters. He complains that the movie slips in an out of reality, sometimes deadly serious and at other times so peculiar and loony that it’s more of a caricature than a coherent story.
All of these things which Ebert decried in 1987 are exactly the things that make the Coen brothers’ films so exciting and original today. Their characters are odd, their settings are never quite real life. You the viewer can not predict what kind of shenanigans will erupt next, precisely because the rules of the universe are in flux within the Coens’ films.

In Raising Arizona, Nicolas Cage plays H.I. – a multiple convict who marries one of the police officers at the jail where he is repeatedly booked. After a few years of happy marriage, H.I.’s wife Ed (Holly Hunter) finds out some terrible news: she’s barren. They can not have children. It’s not long before the two of them cook up a plan to kidnap one of the famed ‘Arizona Quints’, a set of five children born to a local unpainted furniture dealer. Then there are subplots about some escaped convict friends of H.I., a demon biker from a dream that appears in real life, and so on.

The actors are all marvelous. Nicolas Cage’s performance here rivals that of Vampire’s Kiss, although with quite a bit more subtlety. They can spout the most ridiculous dialogue without batting an eye, which only adds to the feeling that there are no set rules here. One is tempted to just go along with it when H.I. says that he “premonisced” something, and there are any number of quotable lines throughout the movie that straddle the line between deeply profound and hilariously inept. One of H.I.’s convict friends says that, regardless of whether they steal a lot of money or get sent back to prison, “either way we’re set for life.” Huh. Never thought about it that way.

And of course, there’s plenty of the Coens’ visual humor. The time shows up on the screen in a title card moments before a character asks what time it is. A chase sequence follows the characters straight through somebody’s house and then through a grocery store. Et cetera.

The main problem with the film, though, is that the Coens seem to still be trying to find their footing. They’ve got the moves, but don’t know how to use them. There are two or three critical scenes which, despite whatever humor or importance they may contain, stretch on way past the point where they stop being interesting. For instance, when H.I. goes to the Arizona house in order to kidnap the child in the first place, a pointless series of complications arise.. and arise.. and arise. Before the scene is over, it’s hard not to wonder why he didn’t just grab one of the kids and bolt.
Also, the conclusion of the film kind of lacks the emotional impact that I’m sure was intended. Perhaps the strange score detracted from those final scenes some, but the ease with which everything gets wrapped up, and the questions that remain regarding how much of what transpired really occured, make it difficult to really connect there.

But, as Raising Arizona is merely the second film from the Coens, it’s a remarkably enjoyable and otherwise well-put-together flick. It’s just a glimpse of the magic that would come later, but it is a mighty fine glimpse.