Racing With the Moon 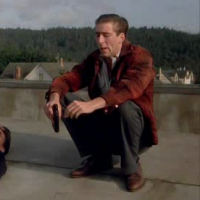 It was on Netflix, I think, where it was listed that people who enjoyed Racing with the Moon also enjoyed Say Anything. I’d say that’s about right, since both are funny and moving films documenting a seemingly simple set of relationships in a remarkably realistic way.

Racing with the Moon tells the story of Henry (Penn) and his pal Nicky (Cage), two teenagers getting ready to be shipped off to fight in World War II. In trying to keep their minds off of the war, though, the boys try to re-live their younger days of hopping speeding trains. They also look to the girls in the town for some companionship.
Which is how Henry comes along Caddie (McGovern). His initial attraction to her is probably mostly physical, but he’s convinced himself that he is in love with her. Rather than being coy and quiet, merely an object for Henry’s affections to fall onto, Caddie turns the tables by proving to be even more extroverted than he is. When Henry tries to act suave by chatting her up at the library, Caddie returns the favor by springing a Christmas Eve date on him… with her best friend.

But that’s what makes the movie so special. We get to watch how the characters slowly grow toward one another. The way that Caddie watches Henry to see who he really is, the way he slowly gets to know her and learn how to impress her. Their relationship is organic, not the product of some cheap screenwriting trick where we cut to a montage of them talking on the phone to stand in for actual romance. These kids really begin to care for one another, and it’s a spectacular thing to be witness to that.

In addition to that wondrous relationship, there is the one between Henry and Nicky. When Nicky gets himself into trouble, Henry goes to great lengths to help him out. Their shared experiences, their shared destiny, draw them together. The way that the story of Nicky’s trouble is dependent on and convergent with the story of Henry and Caddie’s relationship (and another important plotline involving a lie-of-omission from Caddie) puts Henry in a position where he feels pressured to choose between two people that he is loyal to.

There are times when screenwriter Steve Kloves (every Harry Potter movie) can push you to scoffing with thinly-veiled metaphors like, “The bird of freedom don’t come cheap.” But more often than not, the humor and the well-built relationships win out. What’s more: Cage, Penn, and McGovern are all fantastic in this film.

I don’t know what else to say. I liked Racing with the Moon a lot.