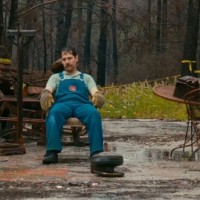 After making a name for himself with indie flicks, the rocks under director David Gordon Green’s feet seemed to give way with a string of big-budget stoner movies, beginning with the amiable Pineapple Express, then growing less enjoyable with Your Highness and finally the totally forgettable Jonah Hill caper The Sitter. Many wondered whether the Green of those smaller, more intimate films had disappeared entirely.

Yet here he is, camping out in charred Texas woodlands with the sound of silence keeping him company, punctuating his simple prose. The script for this, Green’s return to form – and in my opinion, possibly his best work to date – is spare and lean. There are essentially three characters. The movie is made entirely in dialogue. Yes, there’s the overall plot about painting traffic lines on a long stretch of abandoned road. And there is a bit of boyfriend-girlfriend romance drama that isn’t particularly interesting. But beyond that, the movie hit exactly the right notes for me: a slowly building relationship between two men with different personalities, something that feels real and honest and far from stereotypical. They are open with each other, and vulnerable, when discussing their emotions (even when they don’t realize it); but the movie never approaches this in a patronizing or glib way.

Among my favorite moments, and I think maybe the one that really sold me on the greatness of this work, comes after Lance (Emile Hirsch) and Alvin (Paul Rudd) take turns lashing out at each other out of frustration. After the dust has settled, both men realize how childish they’d acted previously and apologize for their behavior. The scene is almost the total opposite of the famous pen scene from Say Anything – instead of the reluctant dissolution of a relationship, instead the calm slide into one. Lance tells a brief anecdote about a pamphlet he saw in high school that said insults only serve to let the person you’ve insulted know how insecure you are. Alvin smiles and turns to his comrade: “I know. I read that, too.” Maybe it doesn’t come across as well here, but it felt like just such a perfect, simple moment. These two men, previously under the belief that they had little in common, suddenly bonding over their shared anxiousness about their identities and their futures. It’s spectacular.

A lot of what makes the movie work so well is in the performances of the actors. Rudd and Hirsch both give incredible performances, each with a stand-out scene of their own. Hirsch’s comes in a dryly comic monologue explaining how he received a black eye; Rudd’s in a pantomimed scene of domestic bliss with an invisible wife. Then there is Lance LaGault, an irreverent yet staidly poetic truck driver who happens upon our leads every so often, offering them vodka and advice. Though he can be rough – knocks a boombox off a stump, growling, “Get out of here!” – he nevertheless brings a measure of warmth into the lives of our leads, always somehow imparting a bit of wisdom even when he might seem unhinged otherwise. Finally, there’s Joyce Payne, a woman who only exists in a corporeal form for one scene. She’s a real person, a non-actor whom David Gordon Green happened upon as she literally sifted through the burned remains of her home. He gave her a scene on a whim, unsure of whether it would make the final cut, and yet it comes across as so vital to the finished work. The mixture of hope, melancholy, pride, and uncertainty in her words and “performance” are stunning, providing a snapshot of the film in her plight.

That’s all there is to it, really. Just remarkable actors given a simple, yet compelling story to work with. And it flourishes; the subtle change in the interaction between Alvin and Lance over the course of the film providing almost all of the drama here. It’s not that they begin the film as polar opposites, although one thinks of himself as much more cultured than the other. In fact, while writing a letter to his betrothed, Alvin notes his complaints about his co-worker but ends with an assurance that he doesn’t dislike his partner – to the contrary, “He’s totally fine.” They movie doesn’t set them up as foils to one another, but simply as two people who don’t think much about one another at first. They’re each fascinated to some degree by the life the other lives, but I think less because of some feeling of difference than a feeling of disconnect. In one memorable scene, Lance details his plan to visit a beauty pageant where he’ll hopefully meet up with a future Miss America. Alvin shakes his head in wonder and says, “Somehow, you really do think of yourself as a gentleman, don’t you?” It doesn’t come across as an insult, and certainly not as a compliment. Lance isn’t comic relief, either, not a wildly quirky specimen who stretches the limits of our disbelief. It’s spoken in a very matter-of-fact way (kudos to Rudd for nailing the delivery of the line), merely an observation.

Alvin sees then, perhaps for the first time, that his sole company on this long trip isn’t just an example of suburban weakness, but instead has a moral guide and framework of self-evaluation that doesn’t have to hit the same notes as his own. Maybe he saw that they were different people before, but now he appreciates those differences – and this is even before the two later come to appreciate their similarities. And again, I can’t say this enough, the power of these moments is all accomplished through the subtle shifts in tone on the part of the actors and in the careful word choice of the script. The movie runs the gamut of emotion in crafting these three-dimensional, utterly relatable and endlessly charming characters.

Maybe it’s too simple, or too slow at times. The film’s reach is very limited and maybe that reflects some hesitancy on Green’s part. It has something of a student film vibe (and it’s a little dispiriting to learn that it’s heavily influenced by an Icelandic film, to the point of copying many lines and shots directly), which is both weakness and strength. It feels pure, but also fleeting. Nonetheless, Prince Avalanche is a striking return to form for David Gordon Green the auteur and a film that was really resonant for this viewer. I am so happy to have seen it.