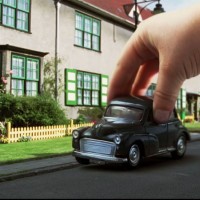 Nemo Nobody is a 9-year old faced with one of the most difficult choices a child can face: he must decide whether to stay with his father or mother after their divorce. He has just a few moments to make this decision, however, as they’ve cruelly sprung the options on him as his mother boards a train to start her new life elsewhere. The choice is complicated somewhat by the fact that Nemo, as a result of an angel mistakenly forgetting to wipe his memories before birth, can see the future… and in both futures, things get bleak.

Or maybe the “seeing the future” thing is just a product of Nemo’s imagination? Or maybe he’s really a 118-year old man on the brink of death in the year 2092, trying to piece together the memories of his life and filtering it all through the construct of precognition. Or maybe, wait– maybe he’s in his mid-thirties, and his life plus all potential future lives are playing out in his mind before he drowns after his car crashes into a lake? Or maybe he was shot in a bathtub by a hit-man who mistook him for another man? Like a solo version of Cloud Atlas (this movie was actually made in 2009, but didn’t get U.S. release until 2013), the movie jumps between different points in the different lives that Nemo leads/led/could have led, which leads to something both abstract and engaging.

On top of this, there’s a thread of pop philosophy that provides another layer of questions to the proceedings. As a young child, Nemo asks why he is himself, as opposed to somebody else. Why can we remember the past, but not the future? What will happen when the universe reaches the limit of its expansion and begins contracting – will everything that has happened play out in reverse? These rhetorical questions are slightly facile (one character bluntly asks, “Is there life after death?”), but they nevertheless put the viewer in a particular frame of mind… a contemplative state, one that is willing to go along with an extreme rendition of the “butterfly effect” (yes, that old chestnut is trotted out here) even while recognizing its lack of originality.

The shallowness of its philosophy aside, I feel largely positive toward Mr. Nobody. I couldn’t stop thinking of director Richard Kelly’s weird, almost incoherent passion project Southland Tales – a movie which, although unsatisfying overall, commands a measure of respect merely for attempting something unusual. As a rule, I’m drawn to works of art that shake up the paradigm, that reach for something new and that seem to have a reason for doing so. I’ve name-dropped Gaspar Noe probably a thousand times, but the spatial and temporal freedom he grants his camera re-defined the limits of filmmaking in my eyes. The interminable rape scene in Irreversible is brutal, but I can look past it because of the elements that impressed me so much.

Mr. Nobody is not on part with Gaspar Noe’s work, but it has a style and a voice that is totally its own nonetheless. The movie is incredibly abstract at the start, before the viewer is allowed to get his or her bearings. There are numerous inventive shots, such as when the camera pulls back on a scene in progress to reveal it as the image on a postcard, or the one I’ve selected for the thumbnail where a car enters the shot by being placed there by a child’s gigantic hand. Some moments do have the kind of smug cleverness of the movie’s teenage philosophy; for instance, a shot copied from Garden State where Nemo wakes up wearing a plaid sweater that matches the wallpaper. For a more groan-worthy example, consider the scene where Nemo writes a science fiction story about people traveling to Mars… using a manual typewriter! Ohmygawd you guys, the contrast makes a statement probably! Also worth mentioning is the repetition of a handful of songs on the soundtrack, which initially seems like a conscious thematic choice, yet ultimately comes across as arbitrary. Then again, I really don’t know whether some kind of consistency would have worked in the film’s favor or felt more desperate.

And then there’s other moments that amaze, as when a scene begins skipping and stuttering. I thought it was a problem with my copy of the film initially, but no doubt that confusion was part of the intent – we are quickly shown that Nemo is fashioning the scene from memory and is stumbling over what, exactly, happened. Some of this through-the-eyes-of-the-author stuff caused my wife to compare the movie to one of my favorites, Atonement (it certainly doesn’t hurt that two of the stars of that movie, Juno Temple and Daniel Mays, have major roles here). While we’re on this topic, I’m often skeptical of movies about writing because they usually seem to be nothing more than an outlet for the screenwriter to provide winking references to his or her own self-recognized genius. Mr. Nobody doesn’t fall into that trap, which in itself is something of an accomplishment.

In all, and in spite of some teenage profundity that doesn’t manage to impress, I think Mr. Nobody is a good movie. It shares some elements with other movies, but that doesn’t detract from its artful shots, strong performances (Juno Temple, Diane Kruger, Rhys Ifans, Sarah Polley, and Jared Leto all do a fantastic job here), or its gleefully confusing narrative. I might have been able to do without the audience surrogate who interrupts every once in a while to ask questions incredulously. “So did your wife die or didn’t she?” I mean, there are definitely flaws here, or “weaknesses” if you prefer. But those weaknesses aren’t the whole of the movie, and the things that do work, or which are stunning just for the sheer pleasure derived from a filmmaker taking a risk by making a weird, off-putting but not impenetrable work of art… these are the things that make me feel that, in the end, Mr. Nobody is a success.