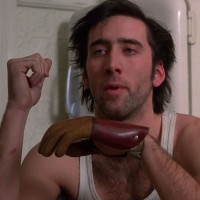 The fact that the central romantic relationship in Moonstruck feels quite false is somewhat balanced out by the charming humor and the pleasure that comes from watching Nicolas Cage at a time when he still considered himself a method actor.

The film tells the unremarkable tale of several people from two different Italian families and the romantic entanglements that they get themselves in. Loretta (Cher) is going to marry Jonny, who leaves for Sicily to be with his ailing mother. Meanwhile, he leaves Loretta to make amends with his brother Ronny (Cage). The two brothers have not been talking for the past five years, due to an accident that claimed Ronny’s hand which may or may not be in some way Jonny’s fault. However, it doesn’t take long before Loretta sees through Ronny’s tough exterior to the real man underneath and she becomes torn between the brothers. Then there are Loretta’s parents, each of whom are having an affair (or trying to), and her aunt and uncle – yet another couple who get struck by the moon and see each other in a new light.

There’s a lot of sweet, soft humor here. No broad, laugh-out-loud sort of jokes; no slapstick; none of the sexual or excretory jokes that seem standard even for children’s fare these days. Instead, the humor relies on the delivery. When Loretta’s father gives his mistress a bracelet with stars and birds on it, the real punch comes from the monotone way that he says, “Birds.. fly to the stars, I guess.”

And so I guess that’s why I feel like there’s not a lot to say about Moonstruck. Instead of relying on a lot of action and twists and betrayals, so on and so forth, like most romantic comedies, Moonstruck ultimately travels a far shorter distance… and yet, the swell of emotion that comes at the end of the film is still earned. The warmth in your heart is the goal of the film, more than finding out who wins the girl.

I do have question about exactly why Loretta and Ronny liked each other in the first place. Perhaps if that weren’t so hard to discern, I would have liked the movie more than I did. Still, Moonstruck remains a highly enjoyable, sweet movie. It’s probably not going to change your life, but it’s practically guaranteed to bring a smile to your face.

Ain’t nothin’ wrong with that.