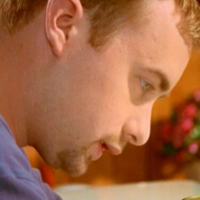 It has been far too long since I last watched a movie by one of the Christiano brothers. A lot of Christian cinema has a significantly softer sell than is apparent in the Christiano style. There’s no assurances that God will reward you with football championships, a la Facing the Giants, or that general feel-good mediocrity of stuff like Letters to God. Instead, these guys are all about atheists as evil enemies and God as wrathful, vengeful, and altogether terrifying. There’s no deviation from this formula in the short film (just over 30 minutes) Late One Night.

The main character is Larry (Brad Heller), a blue-collar factory worker who resents his station in life. He’s upset because his father left when he was young, helpfully offering to Larry’s mom the child-trauma inducing line, “I hate you and I hate that kid.” He’s mad that his mom had to take demeaning jobs afterward, that he wound up transitioning in an out of prison as a result of his father’s unsupportiveness, that he’s 32 years old and doesn’t have a wife or kids. In short, he’s bitter. It probably doesn’t help that a co-worker named Riley apparently threatens him with Hell at every available opportunity because he’s a “heathen”, i.e. doesn’t believe in Christianity. Additionally, Larry is under investigation for sexual harassment.

The movie doesn’t really show us what he’s done that constitutes harassment, but everybody is aware that he’s been acting inappropriately with regard to a female co-worker. When he’s called into his boss’ office and confronted about the situation, Larry flatly denies that he’s done anything wrong. Victim-blaming the entire time, he contends that the woman is lying. After leaving his boss’ office, Larry makes a point of making flirtatious advances toward his accuser immediately. Even if he was somewhat sympathetic for the hardships he faced early in his life, Larry is clearly set up as the evil atheist, constantly overbearing and obnoxious. Sure enough, when a soft-spoken Christian enters the diner that Larry and a few of his friends are eating at after work, our man can’t help but instinctively begin picking on the newcomer. Clearly, this is some kind of beta-male overcompensation.

In any case, Larry begins referring to the diner patron as “Jesus” because of a tract found in his jacket pocket talking about God’s love. Incidentally, the tract came from a street preacher accosting passersby with literature in the darkness outside the diner – very creepy. At one point, the street preacher asserts: “When you have Jesus in your life, you’re on Noah’s Ark. When you don’t have Jesus in your life, you’re on the Titanic.” I get that this is meant as a rhetorical device, but it’s hard not to wonder whether Christiano is aware that the Titanic is real. Is he suggesting that all of the people who actually died in sinking of the Titanic weren’t sufficiently Christian?

Anyway, Larry goes about berating the shy Christian who just wants to get the chicken sandwich and fries he ordered and get out of that diner. His complaints about Christians and Christianity are really surface level stuff, largely centered on the fact that most Christians he knows are “hippos”, i.e. hypocrites. It’s clear that Larry is out of line, taking his frustrations out on a much weaker individual; nevertheless, this is a movie – the only thing preventing “Jesus” from rebutting Larry’s arguments is the failure on the part of writer/director Dave Christiano to provide the character with anything to say. Consequently, “Jesus” mostly stews in silence while Larry giggles with his friends about the absurdity of Christianity. In all honesty, it’s not hard to see that Larry is on the edge of being talked into becoming religious – he gets a faraway look in his eye as he considers aloud what it must be like if Hell is real. Nobody else speaks and the camera closes in on Larry’s face as he describes the “burning and screaming, burning and screaming” of those consigned to eternal, fiery torture. Larry concludes that 9 of 10 inhabitants of Hell are church members; their hypocrisy their crime… they never actually believed in Hell. “If they don’t believe in Hell, why should we?” Larry asks.

I get the feeling that this is the central thesis of Late One Night, as applied to Christian viewers. Christiano wants to convince viewers that Hell is real – viewers who are might be committed to a more “progressive” view of theology which views God as ultimately loving rather than vengeful. He wants viewers to think, “Wow, he’s so right. If I don’t live in constant fear of being burned alive for eternity, then how can I convert insufficiently evangelical Christians and others to my crazy religion?”

The importance of this message is driven home by “Jesus” finally turning to Larry and unleashing a barrage of sneering assertions that Jesus will return to Earth soon; that when he does, there will be chaos and confusion. “Jesus” assures that God will, quote, “pour out his wrath on all mankind.” Larry sarcastically responds that he’s not scared. “You should be,” ‘Jesus’ shoots back, with deadly seriousness. “God’s patience is running out.” Yes, the Christiano god is no saint. He’s positively devilish. The Jesus of the Christiano brothers didn’t die for your sins; he died to give you an idea of what will happen to you next.

Of course, it’s easy to condemn somebody like Larry, who next does the unforgivable… when “Jesus” finally gets his chicken sandwich, Larry touches it! I don’t mean to sound like I’m making light of the situation; I am honestly disgusted by Larry’s actions and would like to reiterate my disdain for this sexual predator / chicken toucher. “Jesus”, as is his way, turns the other cheek – paying both for his own food and that of his tormenters. Jesus paid Larry’s bill, you see. So I guess Jesus still is here to forgive? Oh, I think I get it now: Jesus and God-the-Father are playing “good cop, bad cop” with humans. Wow, that must be confusing. I guess God really does work in mysterious ways.

While Late One Night does have some positive attributes in the form of lead Brad Heller, who is actually not that bad of an actor, ultimately the movie is a confounding, plodding, pointless exercise in self-satisfied scare tactics. It might really work on the target audience, but from where I’m standing there’s not much weight to it at all.

One Response to “Late One Night”