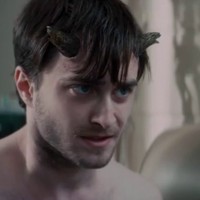 The theological/supernatural horror/thriller Horns is perhaps easier to appreciate than it is to enjoy. Its themes are both mundane and too abstract to land – something about being cruel to be kind, and the unsteady balance of darkness and light which lives in the soul of man. It has some moments of quiet emotional resonance and some great scenes of absurd comedy, but there’s an equal serving of one-note characters (Gay cops! Hilarious!) and groan-worthy plot contrivances. For every instant where the characters get a chance to exhibit depth, there’s one where they deliver a grating one-liner or lapse into broad scenery-chewing. Much like its protagonist, who himself wrestles with the balance of love and hate, trust and paranoia, fear and excitement inside him, the movie itself is torn between two worlds: one that takes its conceit as a poetic device and one that treats it as a source of desperate melodrama.

I’ve seen the concept compared to Kafka, and that’s apt. Ig (Daniel Radcliffe) wakes up after his girlfriend’s murder to find that he’s sprouted two grotesque devil horns on his forehead. Yet the horns aren’t visible to some people (perhaps those whose goodness outweighs their bad?), and those who can see them find themselves to profess their darkest thoughts and desires. Indeed, the movie is at its best in these early scenes as Ig stumbles through town in confusion and panic. He goes to a doctor’s office, only to have the physician confess his drug-addled state. A little girl in the lobby admits she’d like to murder her mother. When Ig goes to his parents’ home for advice, they each solemnly inform him that he’s on his own. In these disjointed scenes of confession, with our protagonist feeling ever more alone and helpless, is the film’s power. I could even get behind the plot mechanics, which finds Ig using his new-found abilities to hunt down his girlfriend’s killer. If the movie had maintained its inquisitive air, in which characters reveal their innermost thoughts with a stunning frankness and then discuss them openly, Horns could have been a tightly constructed indie treasure.

But instead, it turns into a who-dun-it, and the characters he encounters begin to have progressively thinner stories. When the killer is finally revealed, the confession is that of a James Bond villain – gone entirely are the compelling relationship tumults we’d seen previously. The movie has traded them in entirely for something over-the-top and yet frustratingly rote. Some of the particulars of the final moments might remain surprising, but it’s in service of a conclusion that layers hoary tropes and cliches on top of one another.

I suppose it could be said that Radcliffe does well in his role, committing to his increasingly frazzled character. Yet it’s hard to forget a diner flashback scene where he over-indulges and comes across as cartoonishly crazed… not in the fun Nicolas Cage way, instead just unfocused. David Morse has a meaty role as the father of the murdered girl, but he sleepwalks through most of his scenes, relying on his perpetual hangdog expression to convey his character’s sullen demeanor. Then there’s Juno Temple (Atonement), the girlfriend who luckily gets to exist for something more than being murdered at the start of the movie – she appears in several flashback sequences which flesh out her character (if you know what I mean). And yet despite making a proclamation early on that she’s her own woman and not the pawn of some man’s game, she still ends up acting as little more than a plot device whose brief moments of autonomy are less examples of her exercise of free will than they are mere plot twists. Joe Anderson (Across the Universe), as Ig’s older brother, has arguably the most emotionally taxing role as someone wracked with anguish at the recent death and trying to self-medicate with drugs and alcohol; but his story, too, wraps itself up too tidily when the time comes for wrapping stories up.

Now that I’m saying it aloud, I guess that the bad kind of outweighs the good in Horns – despite its clear attempts to appeal to me specifically by the prominent inclusion of a sweet orange AMC Gremlin and the choice to play Sunset Rubdown’s “Shut Up I am Dreaming of Places Where Lovers Have Wings” over the final scene and end credits. It has scenes of bizarre happenings and dark humor, of sincere drama and, yes, the paranoid tension of its protagonist spills over into the tone of the film on more than one occasion. But it too often falls back on flimsy characterizations, trite developments (no spoilers, but imagine something on the level of “it was all a dream” as far as dumb revelations go), and too-simple conclusions to what ought to be more earth-shattering developments in these characters’ lives.

It’s tempting to recommend the film on the basis of swinging for the fences and missing, in the way that some other filmmakers’ passion projects are worthwhile even if they don’t fully succeed at what they likely intended (e.g. Southland Tales, Mr. Nobody). But it doesn’t really feel like Horns takes it vision, runs with it, and merely stumbles.  It sprints for a while, but then seems to give up and take an easy ending. Maybe part of it is the fault of the source material (a novel written by Joe Hill, son of Stephen King), but certainly part of the job of translating a book to screen is altering or excising those things which either work better on the page or which don’t work at all. As it is, Horns is a good idea severely hobbled by a feeble follow-through.