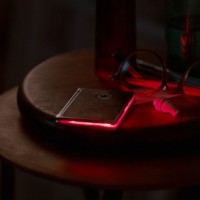 In very broad strokes, the Spike Jonze written and directed Her is about a man who falls in love with his computer. That’s the premise in a single sentence, if you’re not familiar with the movie, but limiting a discussion of the film to that description does it a disservice. Because the fact that Samantha (Scarlett Johansson) is just a voice – albeit a fully artificially intelligent one – coming out of a computer is… well, there are ways that the limitations of her existence become important to the narrative, but in other ways her lack of concrete form is irrelevant. Because the movie is, to a large degree, about the relationship that she develops with Theodore Twombly (Joaquin Phoenix) emotionally, and to that end her formlessness is less of an issue.

It’s kind of a surprising thing, really. Theodore is invited out on a double-date with his co-worker Paul and his new girlfriend. Theodore nervously responds, “Okay, but Samantha’s an operating system.” Paul cheerfully responds, “Great!” This is what I mean when I say that, to a great degree, Samantha’s nature isn’t as important as it might seem. That Theodore and others tend to take at face-value that Samantha, artificial or not, is intelligent and virtually alive, allows an incredible romantic relationship to blossom between herself and Theodore – the chemistry between the two an electric and joyful thing… despite the fact that Johansson never appears on-screen. The entire relationship is sold by virtue of her velvet voice and the plaintive, contemplative, or occasionally distraught faces that Phoenix makes as the sole actor carrying a lot of the action.

But the easiness with which we, as audience members, accept Theodore and Samantha is astounding. Her cheerful laugh, the sincere joy in Theodore’s voice as he interacts with his new girlfriend, it’s believable and well-developed. It feels like a real relationship, not just some screenwriter’s construct – and this, despite the fact that one of the participants is often visualized as a little camera or a glowing red light. There’s an amazing, if uncomfortable, scene where Samantha attempts to imagine what it would be like to engage in physical relations with her boyfriend by enlisting a third party to “portray” her. While the situation is in some ways comical and awkward, it’s also deeply moving because the emotions that Samantha is feeling are easy to understand. But it’s equally easy to understand Theodore’s reluctance to go through with the act. THAT’S the mark of greatness right there, that even in an otherwise zany set of circumstances, both characters’ motivations and unspoken desires ring true and reasonable.

I went into Her with very high hopes because several friends had been telling me how spectacular it was. I had primed myself for something approaching Say Anything levels of emotional realism (a high standard, because I consider that one of my very favorite films). Part of what makes Say Anything so special is that there are no “bad” guys – the relationship between the two teenagers is moving and honest, but so is the relationship between Diane Court (the girl for whom John Cusack holds up his boombox in that iconic scene) and her overbearing father… he’s shown fairly, as a loving father who wants what’s best for his daughter and who honestly feels that the boy she’s been spending time with is a bad influence. Nobody is given a stock villainous role or motive for simplicity’s sake; all the characters are roundly developed human beings. Indeed, so too is the case with Her.

I’ve already mentioned Paul (Chris Pratt, “Parks & Recreation”); the naked way that he praises Theodore’s writing and compliments him for his sensitivity, it exhibits a sincerity and openness in this male relationship that other films might shy away from showing, yet it’s immensely enjoyable. Secondly, a lot of the stumbling blocks that Theodore and Samantha face come as a result of Theodore’s anxiety about finalizing his divorce with his first wife, Catherine (Rooney Mara, The Girl with the Dragon Tattoo). She left him in anger, but his opinion of her isn’t colored by the negative circumstances of their break-up. Instead, her character is fleshed out through flashes of memories played on-screen, of when they were happy together and younger. They knew each other since they were young, and Theodore talks of their companionship as having been important for shaping who each of them became. For instance, he helped her to overcome a feeling of unworthiness in her work by encouraging her to try and fail at new projects without regrets. Despite the fact that Catherine remains an “ex” throughout the film, and one who instigates some of the emotional turmoil of the latter half of the movie by suggesting that Theodore is dating his computer because he isn’t up to facing “real emotions”, her character is nevertheless developed with a respectfulness. She’s not just the bitchy ex-girlfriend who shows up to rain on Theodore’s parade; she’s a real person, a woman whom our protagonist used to love and still holds a deep fondness for. That even-handed portrayal of the character is beautiful and unexpected.

Thirdly, there’s Amy Adams. Although their exact relationship is never explained, Theodore and Amy (that’s her character’s name, too) are great friends. Their friendship is natural and uncomplicated, the pair freely bouncing jokes off of one another and thoroughly enjoying each other’s company. IMDb Trivia suggests that the naturalism in the relationship between this pair comes from the fact that Jonze forced them to spend time together, alone, for hours on end in order to forge a realistic bond between the two. The relationship between Theodore and Amy is therefore a fourth pairing that bears the mark of realness that I was hoping to find in Her and did in fact find. When Amy describes the petty fight that led to the separation of herself and her husband – over something small and unimportant that they’d argued over before (leaving her shoes by the door) – the description of that fight, and of the life-shaking consequences of it, feels utterly believable and relatable. Yet again, the movie… the screenplay written by Jonze himself… delivers characters, or rather entire worlds within the characters’ thoughts and interactions, which are entirely human and authentic.

I’m more than 1,000 words into this review, yet I’ve only just scratched the surface of the intense power of Her. I don’t want to get into spoiler territory here, but the arc of the plot twisted in a unique way that I did not anticipate, and which takes full advantage of Samantha’s limitations in a philosophically challenging way. Not just her limitations, actually, but the expansion of how much “humanity” she has and the growth of the character from something responsive and immature to someone with rivers of uncertainty and jealousy, whose expansiveness perhaps precludes her from being limited at all. There’s also a wealth of beautiful imagery on-screen. One moment that I made a point of remembering had Theodore, early on, playing a virtual reality video game (this is before he meets Samantha). His video game character responds to his every movement, so when Theodore gets exasperated and leans back, so does the character. Eventually, Theodore leans forward and bites into a sandwich. The character on-screen has no sandwich, so the image appears to be holding its head in its hands, weeping. What a fantastic image. Or take, alternately, a later image – after Theodore has met Samantha – where he runs happily through the subway with her camera in his pocket, the two laughing together, until he emerges on an expansive image of a crowded beach, bathed in golden light. “The ocean!” Samantha gasps. What does she feel seeing the ocean? Pangs of resentment that she can’t splash in the warm surf? Gratefulness for even being given the opportunity to explore the world as much as she has been able to with Theodore? Where everybody else on the beach is clothed in swimwear, Theodore remains in his high-waisted dress clothes, collared shirt tucked in. He’s no more taking advantage of his unique (as compared to Samantha) ability to immerse himself in the locale than she is able to. Is he refraining out of solidarity? The swell of mixing motives and the closeness of the characters in this moment, it makes for a rich and exciting picture.

Her immediately became one of my favorite films of the year. Its sweet, knowing portrayal of its myriad relationships and the both joyful and aching ways that the relationships progress is, in a word, exta-ordinary. A truly remarkable film.