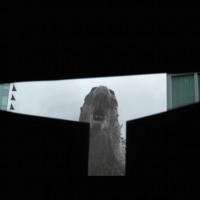 After seeing Godzilla, the latest iteration of the indefatigable lizard king, I felt there wasn’t a lot to say. Much like last summer’s Pacific Rim–and like a lot of summer films, come to think of it–the movie is all spectacle and little weight. Is it fun to see giant monsters smashing buildings? No more, or less, than ever before. Despite the prominent role of Bryan Cranston, who wowed the populace with his portrayal of Walter White in television’s “Breaking Bad”, there is little in Godzilla to recommend.

But that’s not to say there isn’t anything to talk about.

Apparently the thrust of most criticism (if The Dissolve is to be believed) depends on the limited characterization of the humans – played by the aforementioned Cranston, Kick-Ass‘s Aaron Taylor-Johnson, and Martha Marcy May Marlene‘s Elizabeth Olsen – in the grand scheme of things. Their roles are relatively rote; Taylor-Johnson and Olsen in particular have an obligatory romance to create stakes, but their relationship isn’t really developed beyond the child they have together. David Ehrlich argues that this isn’t a flaw. He refers to the film as the first “post-human” blockbuster, and praises the movie for realizing it does not need to get viewers to care about its characters. He contends that Godzilla – acting as a force of nature – is where the movie’s emphasis lies, and that the human characters rightly become set dressing as the film’s scope intensifies.

I don’t see how this is commendable or unique. Pop culture is replete with examples of heroes and villains who view society as mere collateral. For every individual whose story is granted momentary meaning, there are thousands who are ignored; skyscrapers exploded and destroyed; vehicles crumpled and roads torn up. I cannot see any virtue in watching Godzilla rip apart the West Coast without acknowledging the human cost. In this movie, huge buildings are demolished with chunks of concrete falling from the skies and clouds of dust erupting all around. A massive tidal wave envelops a busy street as thousands of men, women, and children make a futile attempt to escape (the movie cynically follows one family with child into a building, as if to assure the viewer that everything is okay because one family improbably survived the torrent). Literally millions are killed.

That last thought is instructive. Godzilla was born as an allegory for the destructive force of nuclear war, and in fact the movie takes advantage of that knowledge by referring to the bombing of Hiroshima. Said reference is done by one character showing another a watch that stopped at the time of the blast. It’s a sleazy, lazy way of adding some supposed “depth” to the film, no better than giving a character “rape” as a back-story. The movie wants to pretend to have a conscience, then casually blot out innumerable lives without even a shred of compassion. At one point, Taylor-Johnson is part of an army unit attempting to transport a nuclear warhead by train to extinguish Godzilla, but the gargantuan beast gets the better of the troop. Aside from a long shot of the creature swallowing one of the train cars whole, there is no serious handling of the final moments of these men. Later, Taylor-Johnson refers to himself as “the only survivor” and it comes across as a curiously gutless statement. Rather than feeling as though he is the lone survivor of a traumatic, terrifying incident, it appears merely that he is the only survivor of the previous scene, the only character written any further action or dialogue.

As stated, Godzilla is hardly the only movie (and hardly the only PG-13 rated movie, for that matter) to deal in Holocaust-level casualties so casually. Without showing any blood, or bodies, or even the grief of those left behind. When the rampage ends, the television news marquee speaks in terms of being “saved”, of being grateful and relieved rather than distraught and in shock. If this is not in fact the first movie to tread senselessly over the graves of its unnamed extras, why does it bother me so much here?

My ultimate complaint with the film is indeed with the film’s characterization–or lack thereof–of its human characters. However, I am not so concerned with the way they are characterized as individuals, although we have been allowing movies to get away with offering only thin proxies of actual people for far too long. Instead, my concern is with their personification as human beings at all. To provide an example: one of the most memorable sequences has Taylor-Johnson riding a monorail at an airport in Hawaii, the vehicle high in the air, outside in the dark, speeding along to the next terminal. Suddenly, the car grinds to a halt and the power goes off; the passengers are left stranded in the darkness, peering quizzically out the large windows. In the distance, straddling the track, is the creature – more enormous than any dinosaur, with jagged teeth dripping saliva and a nasty sneer on its face.

Now think about the iconic parallel moment in Jurassic Park, where the SUVs power down and the humans are left in the rain right outside the Tyrannosaurus Rex’s paddock. It’s not necessary to know the specific characters intimately in order to understand the emotions of the scene: nervous fear, an attempt to remain calm, unbearable tension, and blood-curdling terror upon seeing the creature bearing down on the SUVS. The movie doesn’t depend on knowing who any of the characters are (their thoughts, their dreams, their back-stories) in order to be effective. Rather, the emotions of the scene, drawn out of the viewer and apparent in the characters’ reactions, are what make the moment a supremely human one. We as witnesses can easily understand and empathize with those feelings, even if we’ve never been attacked by a long-extinct carnivore before.

Return to Godzilla. Taylor-Johnson yells at a young boy to move to the back of the car, just before the monster tears the vehicle in two. Other, inconsequential characters scream and slide along the ground; a man plummets off the edge of the broken car and presumably into the creature’s gnashing teeth (never shown, of course). Taylor-Johnson wears a face of steely determination, his clutch on the young boy the only thing representing the true price of losing his grip. Yes, it’s not enough for a human life to be valuable as a rule – the character has to have something representative of innocence to make the stakes come alive. It’s not enough that a man might die in a ghastly, horrible way… instead, we have to show little children or animals in the path of the carnage (yet always able to escape, of course, because we wouldn’t want this to get too real). Isn’t it ridiculous that the movie feels obligated to create things to symbolize the weight of the situation because it has failed to sell its premise otherwise? That image of the creature straddling the track ought to be enough on its own to incite chills. The anticipation of what’s about to happen is where the well of feeling ought to lie. Instead, it’s just a prelude to the panic, shaky camera, and loud noises typical of today’s disaster movies.

And it is typical, but I suppose I just went in expecting something more. I had gotten the impression from the trailers that the movie was grittier, more honest and hard-hitting. “Never judge a book”, right? One of the difficulties of film criticism is accepting the goals the movie actually sought and avoiding pinning your own desires into your thoughts. It’s not fair to judge a movie by what it is not. But on the other hand, when a movie is garbled, soulless, and exchanges action for awe, maybe it’s more than appropriate to judge the movie for what it is not. Godzilla is not good.