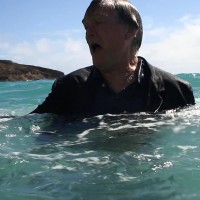 There was no movie I had greater interest in seeing at the end of 2013 than Final: The Rapture, incompetent writer/director Tim Chey’s immediate follow-up to his rapturously awful 2011 feature Suing the Devil. That film easily became one of my top three favorite Christian films because of its utterly nonsensical storyline, incredible acting failures, and amazingly quotable dialogue. It’s a cult movie that doesn’t even need the Mystery Science Theater treatment because the movie is so bizarrely unhinged that it’s sure to leave viewers rolling in the aisles without need for additional prompting. Consequently, I had high, high hopes for Final: The Rapture… hopes that, unfortunately, the movie cannot live up to. Let me be clear – this is another ridiculous outing from Chey, who remains one of the most adorably untalented filmmakers I know, but it just isn’t as groundbreaking in its ineptitude as its predecessor.

This film documents the Christian Rapture as experienced by a handful of world citizens left behind – Collin, a professional football player in San Diego; Masashi, a journalist in Tokyo; Maria, an amnesiac in Bueno Aires; and Professor Tom Wiseman, philosophy teacher and grumpy atheist, who has washed up on a deserted island in the South Pacific following a plane crash when his pilot was Raptured. These characters all try to come to terms with the fact that the world has changed violently; they must individually learn what being a True Christian™ means and accept that God is real. When I say that the world has changed violently, I mean that the movie shows only two or three days after the Rapture, yet the entire world is gripped by famine, there are riots and fires in the streets (pasted onto the screen with Birdemic-level special effects), and the U.S. has been plunged into economic turmoil “fifty times worse than the Great Depression.” Incidentally, it is kind of funny watching the people casually strolling along the sidewalk in the background of most scenes, even when there’s supposed to be a building on fire nearby or constant rioting. One of the dangers of filming on location, I suppose: non-actors do not understand that the world is supposed to be ending.

Unlike Suing the Devil, there aren’t as many examples of jaw-dropping silliness – though, importantly, they are not completely absent. Take for instance, a moment where Masashi, on the run from government agents trying to prevent him from telling the world that Jesus is real, hides in a trashcan. His pursuer looks in the trashcan right next to the one Masashi is in, then abandons his search. Or consider the moment when Maria encounters a woman who stares ahead with a vacant expression. “She’s been like that since October 18th,” the woman’s mother explains, as though that means anything. Or better yet, take the one moment that arguably rivals Suing the Devil for total insanity: Wiseman finds a cellphone in a backpack that washed ashore and frantically dials for help. There’s an answer:

That’s right. He called The United States of America and asked whether Jenny was there. Brilliant. So there is some of the traditional Tim Chey lunacy. One more example before I move on. Wiseman earlier found a (different) phone with a complicated antenna and made a call for help. When the operator informed him that 700 planes had crashed and that there weren’t enough rescue crews to come get him, Wiseman instinctively calls her an idiot. The operator’s tone quickly changes: “You just committed a federal crime under the new Hate Crimes Act for calling me an idiot.” Yes, that’s right. The Rapture happened less than 3 days ago, the world is experiencing unprecedented economic devastation and general havoc, but we’ve already implemented some new, absurdly broad-reaching Hate Crimes legislation. Makes perfect sense.

Of course, the reason this line is in the movie to begin with is that True Christians™ are particularly vulnerable to becoming victims of hate crimes legislation, and therefore the specter of being jailed “for their beliefs” feeds into both their vision of a dystopian future and their masturbatory martyr fetish. But this is a good segue into what is the more incredible part of the film for me – its defense of its religious beliefs. The majority of the True Christian™ characters come across as automatons and their creepy monosyllabic yearning for a real rain to come is always unsettling. “We’ll all have to pay for what we’ve done,” one of Maria’s friends warns while clutching the torture device she wears around her neck like some kind of pendant. What’s bizarre is that the movie apparently thinks it’s presenting these robots as worth emulating. And it presents their mindless justifications for their beliefs as though they are convincing.

The most prevalent defender of the faith is Rochelle, wife of Collin the football player and a student in Professor Wiseman’s philosophy class. A recent convert, she was immediately tempted to drop philosophy altogether (…because “philosophy” conflicts with her religion?), but agrees to stay in the class when Wiseman allows her to structure her thesis around proving God’s existence–a task which she thinks she’ll be able to complete with ease. In class, Wiseman declares that God is dead and ridicules anybody who disagrees (because this is obviously something that really happens in college classes). He says it’s irrational to believe in God and asks those who disagree to explain why. One student offers an air-tight response: “I just believe in God.” Strangely, Wiseman doesn’t seem impressed. Luckily, Rochelle speaks up. She describes a time when she was standing on the beach and cried out to God, then immediately heard thunder and saw the sky turn red. She concludes, “If we base proof of God on that criteria alone, it proves God exists.” Again, air-tight. If we lower the bar so far that the word “proof” loses all meaning, then yes, you’re right Rochelle. Way to go.

But Rochelle is just getting started. Wiseman counters that if he asked another student to flap his arms and fly away, it would be irrational to believe he could do so without some sort of evidence. “I believe he can fly,” Rochelle shoots back. “Whether he does or doesn’t does not disprove belief. Belief in God is not based on a magic trick.” You heard right: she equates evidence with magic tricks. She continues, alleging that the only way to know God exists is by faith. No joke, her very next contention is that she knows God exists because she’s seen answers to her prayers. So… which is it, then? Is it faith, or is it evidence (answers to prayers)? It’s a rhetorical question; the answer is that it’s “evidence” only so far as nobody challenges the sufficiency of the evidence – that’s when one is forced to fall back on faith.

One last thing from Rochelle: when her husband asks what happened to make her act so strangely, her answer is “a leaf-bug”. That is, a bug shaped like a leaf. Suddenly, everything started to make sense. She had an epiphany. This answer is actually remarkable less for its lack of explanation than for the fact that it is a surprisingly common answer among those who have become swept up in religion. Often, it has something to do with animals or insects, or at the very least some small observation about nature that spoke to the individual in a profound way. The willingness to attribute something beautiful to “Christianity” is impossible for me to understand; to go from awe at a natural adaptation to zealously plugging the holes in a whole belief system seems like a monumental jump to make. (Rochelle: “I’m not a zealot! I just love Jesus!”)

Speaking of that monumental jump, Wiseman on his island finally gets hold of a man who claims he has triangulated the professor’s position and is sending a rescue team forthwith. What luck! However, the man on the line suddenly becomes frantic, ranting about danger and a tribe. Wiseman is perplexed, until he turns to find a group of brown-skinned tribesmen preparing to attack him. They are covered in war paint, wear next-to-nothing, and chuck spears at our man Wiseman. Racist connotations aside, consider this within the context of the movie’s theology: this tribe undoubtedly has never heard tell of this Jesus character, yet they’ve been left behind after the Rapture. How does this fit in with Tim Chey’s theology? Rochelle would no doubt find a way to bend over backward into some justification (e.g. Romans 1:20 means they did hear about Jesus!), but why bother? On a related note, Masashi ends the movie having gotten proof out to the masses that it was the Rapture that occurred (instead of alien abductions). But the movie doesn’t tell us what this proof is. For as much as Masashi claims that he “must seek the truth”, the movie is content to believe that men can fly by flapping their wings. Given that, maybe it’s no wonder the film thinks its viewers will believe a man could call “the U.S.A.” and find out what happened to “Jenny”.

Perhaps the best summation of the movie comes in this scene: Wiseman, having found a Bible in the luggage that’s washed up on shore, throws it into the sea. He begins to walk away, then turns back to find the Bible has returned to him! If that sounds like a miracle to you, you’re probably the intended audience for this movie.