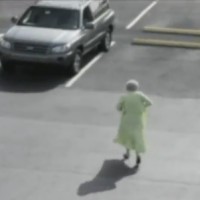 I don’t remember exactly how I found out about Deserted and writer/director De Miller’s 2013 short Bad Neighborhood. All I know for sure is that when I found the trailers for the two movies, I immediately knew I had to see them. Both films center on middle-aged women who spend the majority of their respective trailers arguing with family members. There is no audio in either trailer, everything instead overlaid with an insistent, dramatic score. They looked like exactly the sort of terrible, cheap Christian movies I’m obsessed with. Not finding access to them online, I plunked down $10 each for a DVD copy of the 40-minute film.

Let me tell you: it was worth every penny.

The first, Deserted, follows a day in the life of one Alice Barnett. Alice is an elderly woman who is beloved by her friends at church, but she feels desperately lonely nonetheless. It’s her birthday, and after refusing to join her pastor for a birthday dinner at his house, she instead cooks a microwave dinner and waits for her son to call so they can have a passive-aggressive argument. The amount of time this short spends on their attempt to arrange a time when they can meet to celebrate her birthday is excruciating. And the whole time, the pair is going back and forth with, “I’m sure God will understand if you miss church on Sunday just this once” and “It sure would be nice if you would go to church with me.”

Honestly, Alice’s son should spend more time with her – or else find her a nursing home to live in – because she’s a danger to herself and others. You see, in addition to the crippling depression wrought by her loneliness, Alice has been taken in by Christian evangelism. Because Alice is a good Christian, she is totally wrapped up in her religion to the point that she spends her free time watching an aggressive televangelist rattle off verses about The Rapture, i.e. when Jesus comes back to take the best-of-the-best back to Heaven with him and cast horrors down onto Earth. Alice, listening to the television, is racked with sobs and sends some prayers to the Good Lord asking for mercy – just in case constantly reading the Bible and spending every waking moment at church isn’t enough to get on his good side.

Let me stop for a moment to assure you that beyond this case-study of emotional abuse the movie is epically bad. The sound is awful – every time a character is far away from the camera or is speaking in voice-over, their voice sounds as though it’s being played on a tinny tape recorder. The dialogue is pointlessly circuitous, immense time is spent on minor events. At one point, the camera watches Alice throw a plastic microwave dinner dish in the trash and replays the image twice more… because.. uh, I don’t know why. Later, a man wearing an obviously fake mustache attempts to keep it affixed to his face while eating ice cream. Altogether, this makes for a hugely enjoyable experience, but it’s only intensified by the jaw-dropping conclusion. It’s a twist so stupefyingly dumb that it makes Pray look like child’s play, and it’s so important to a full discussion of the short that I have to address it. It goes without saying, then, that spoilers follow…

The day after her birthday, Alice gets up and dresses for church. On the drive there, she wonders why there aren’t any other cars on the road; she passes an abandoned vehicle, its doors wide open, and thinks about calling the police to report the abandoned car. When she arrives at the church parking lot, she finds it empty. Strange. Was church cancelled? There’s no note on the door suggesting this to be the case, yet the doors are locked. Returning to her  SUV, quickly growing panicked and praying intently to Jesus for guidance, Alice sees a group of teenagers in a sports car speed through the parking lot, hooting and hollering. A guy and girl are standing up in the back seat of the convertible, laughing and throwing beer cans on the ground… you know, as teenagers do. Whether it’s the chicanery of the teens or something else, Alice finally comes to realize what must have happened: the Rapture has occurred!

Alice is devastated. She is wracked with sobs, crying out to her God, asking why, why, why, why, why was she left behind? She scans her copy of the Bible for some solace and reads that some who were left behind may nevertheless still be saved. How could a woman so obsessed with the End Times and Christianity be left behind? What else does she need to do to be saved? Grabbing her umbrella, Alice smashes her way through the stained glass door and runs to the big cross at the head of the room. She crumples up on the floor, bowed down and pleading with God to tell her what to do to be saved.

Soon – miracle of miracles – her pastor and two police officers arrive. They’d seen the broken glass and assumed that a burglar was inside. But… but how? The police are still in charge? Weren’t you all Raptured? The pastor laughs heartily before explaining: “Miss Alice, you must have forgotten to set your clock back. It’s Daylight Savings Time!” The end. No joke. Really, that’s the twist. The Rapture did not occur… it was just Daylight Savings Time. This is presented as if it’s just a joke. However, I spoke to a friend about the movie as soon as it was over and he asked me what the “moral” was supposed to be; I couldn’t answer him. What is the movie trying to say? Always trust that God’s plan is correct?

Maybe so, but I’m not sure whether De Miller and crew thought this story through. In a way, the story is heartbreaking. An elderly woman with nobody else to turn to is taken in by slimy evangelicals and harassed with ideas about Heaven and Hell that affect her so deeply that in her mind she immediately decides that the Rapture has happened when presented with a strange situation. Believing this absurd conclusion whole-heartedly, she wastes no time vandalizing the nearest building and becoming consumed with fright. It turns out the Rapture didn’t actually happen, ha? The fact that she has been led to the edge of madness by religious “leaders” isn’t given a moment’s thought. Yet I can’t get it out of my head. On the one hand, the “twist” is so idiotic that it’s hard not to laugh; on the other, Alice’s complete faith that the Rapture had occurred is entirely believable – and that’s kind of horrifying. What if she assumed that her pastor and the police were demons trying to trick her? What if she had a gun?

If there is a message that Deserted meant to send, it’s over-shadowed by the unintended lesson: it is dangerous to take this stuff seriously.