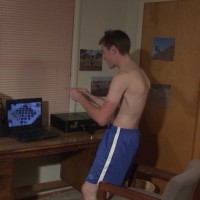 As a law student, my interest was piqued by the premise of Arvin Berner’s Checkmate, a Christian film which centers on a high school student who has to learn to play chess and win a chess tournament in order to get a law school scholarship. Although our hero Aaron is obviously totally tops as a lawyer – he is shown asking a witness one question (“Did you see anything suspicious?”), then declaring that he rests his case with a smug smile – it is unlikely that he will get into law school without assistance because his grades are terrible.

But then, out of the blue, Aaron receives a letter instructing him to go to 130 Maple Street later that evening. The address is written in large letters so it is visible to the audience. It’s not clear what this could possibly be about, but Aaron foolishly plows forward anyway. He heads out of his house, gets on his bike, then looks at the letter again; the camera focuses on the address… 130 Maple Street. The scene cuts to Aaron arriving at a house, much later. He pulls out the letter once again, the camera once again focusing on the address: 130 Maple Street. The camera turns to the house, slowly panning up at the gold letters on the building… 0… 3… 1.

Yes, this is the kind of filmmaking you can expect from Checkmate. But the movie’s main weakness (or strength, if you’re going in expecting something that’s “so bad it’s good”) is in its script and execution. First and foremost, everybody uses the phrase “totally tops” constantly. There’s one scene where Aaron wins a computer chess game, declares it totally tops, talks to a college admissions department about getting a chess scholarship, declares that totally tops, then is accidentally seen in his boxer shorts by a woman and nervously indicates that the situation is not totally tops. Shortly afterward, he’s playing basketball with his neighbor Sarah, who assures him that he shouldn’t be scared about competing in a chess tournament despite having only recently learned to play the game because he is, yes, totally tops.

It’s not just this anachronistic statement of enthusiasm that makes the movie so weird and delightful. When Aaron arrives at 130 Maple Street, he enters to find a bizarre, Eyes Wide Shut style chess league later identified as the “Chess Arcanum”. Men dressed in formal evening wear sit at tiny tables spaced throughout the room while Aaron’s high school law professor (he’s the one who sent the letter!) walks around the room, playing as the opponent for each of the nameless bodies in the room. Aaron, for his part, takes it in stride and doesn’t put up much resistance when his teacher assures him: “Chess is like life. Master the strategies of chess, and you master the strategies of life.” Um… wait, what?

In any case, Aaron agrees to the challenge and dedicates the next several weeks to learning how to play the game. His mother warns him to hide the chessboard when his disheveled father comes home, and indeed the father is constantly embittered that his son is playing chess. I found myself wondering whether chess had abused him as a child or something, and indeed we later find out in the big twist that – TOTALLY SPOILERS – Aaron’s father has been hiding his status as an International Grandmaster of Chess from his son. As his father explains ruefully, “I lost myself in the game, Aaron! I lost everything!” His recounts the horrors in detail: he became so obsessed with chess that he lost his car, lost his job, and dropped out of high school. Thus, Aaron’s father was determined that no son of his would ever fall into that same deadly trap. Are… are we really still talking about chess? You’re not using “chess” as a metaphor for “heroin” or something? Wait, no, who gets a college scholarship for doing heroin… that can’t be right. Okay, so chess is evil. Gotcha. Nonetheless, Aaron pleads with his father to help him become totally tops at chess before the big tournament and his father acquiesces. This seems like asking an alcoholic to help you win just one more game of beer pong. But oh well, nobody seems to consider the ramifications of Aaron immediately asking his father to relive the traumatic experiences of his past vicariously through his son.

But before he enlists the help of his covertly nationally renowned chess master father, of course Aaron has to struggle with not feeling up to the task. He loses his first attempt at a chess tournament when he finds out that he’s playing against Freddy. I know what you’re thinking: “Freddy? Like, THE Freddy?” Well, that’s what Aaron was thinking, at least. You, like me, probably have no idea who ‘Freddy’ is or why it matters that he’s Aaron’s opponent. As it turns out, the answer is: Freddy is a guy who is really good at chess. Context clues, folks. Further dampening Aaron’s spirit is the fact that his first chess teacher – a crude caricature of a Russian who speaks only in the third-person, choppy, incomplete sentences – forces him to choose between his high school law class assignments and learning chess. In the end, it’s all a way for Aaron to find himself at the end of his rope so that he’ll cry out to God for assistance. Incidentally, this is the second and final time that God is mentioned at all in this allegedly “Christian” movie; the first comes early when, in reference to his bad grades, Aaron’s mother asks him whether he thinks God wants him to be a lawyer. Ouch. Thanks, mom.

Of course everything works out in the end. Aaron gets another shot at a chess tournament and succeeds wildly. A couple of law school scouts in the audience approach him and ask him to commit to their school, because obviously that’s how law school works. It’s a good thing, too, because when Aaron was in his depressed, I’ll-never-be-good-at-chess stage, he interviewed at a company to prepare for entering the workforce immediately after high school. Well, “interview” is a strong word – he walked in, sat down, and the hiring agent said they wanted to hire him. “We’ll start you out at $15 an hour,” the man offers, “and increase your salary to $32 an hour after you graduate.” Are you joking?!? Aaron says he’ll have to think about it. And it’s a lucky thing, too, because otherwise he wouldn’t have been able to attend prestigious, made-up school Northshire University.

I suppose the acting isn’t very good, the sound isn’t great, the movie has a cheap aesthetic all around… you know, the typical criticisms. But really, for its genre, the movie isn’t all that poorly put together. What it is, though, is poorly thought out. The movie have a very bad sense of pacing and of how much information needs to be given to the audience. And the script itself, while in theory an unassuming tale of overcoming self-defeat with vigorous dedication, in practice feels utterly silly. The characters all seem kind of over-the-top and speaking of “top”, after the first couple uses of that catchphrase, it needed to totally stop. Was Checkmate intended as comedy? There are certainly parts where it’s clear there was comedic intent (Aaron being caught in his underwear, mainly), but overall it’s difficult to maintain that the movie wasn’t meant to be taken seriously.

And I’m glad of it. I prefer to think of the movie as a serious effort that went badly awry. It’s endearing for being clueless in its ridiculousness; if I found out that all involved intended (or were even aware) of the movie’s badness, I’m not sure it would be as entertaining. As it stands, I think it’s safe to say that Checkmate fits comfortably in the label of “so bad it’s good”. Perhaps it might be more appropriate, even, to say that it’s just bad enough to be good.