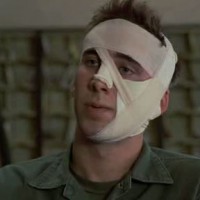 There are times when I don’t really know how to say anything about a movie beyond recounting the events that take place in the film. When I began writing reviews, I would write a short paragraph or sometimes less and be done with it. Now, I am unhappy if it takes me less than half an hour to complete a review. So what I do now is dive into the movie, talk about more than just what happens — go into the choices of the filmmakers, dive into the metaphors and symbolism and themes. That sort of thing.

But I don’t know, really, what to say about Birdy. I guess there’s a theme here about freedom, maybe? Or something about obsession? I don’t know. The movie is mostly about two friends — Alfonso (Cage) and Birdy (Modine) — who spent their days as teenagers living out small vignettes which they will be able to remember later on in life when Birdy is in a mental institution, perhaps as a result of his time in the Vietnam War, thinking that he is truly a bird.
The movie shows the two kids hanging out, intercut with scenes from “present day” where Alfonso is raging against the dying light that is Birdy’s sense of reality. The scenes from the past show Birdy’s slow progression into his obsession and accompanying climb into himself. He is not interested in girls like Alfonso is. He only thinks about birds.

This could maybe be pulled off in an interesting way, but although Modine gives one of the best performances I have seen from him (not that I’ve seen many of his films), it still feels slight. Cage, likewise, gets a few opportunities to throw chairs… but the movie is hampered by terrible dialogue which unfortunately comes often in the form of monologue. I am generally a fan of a good monologue, but these are not good monologues. Cage seems to simply be reciting lines blankly; you never get the impression that he really means anything he is saying.
There are loose ties and frayed ends. Alfonso assures one of Birdy’s doctors that Birdy will be revived by seeing dozens of baseballs his mother has kept when unlucky children hit them over the fence. Birdy was apologetic about the missing baseballs to the point of obsession, Alfonso said. Really? Funny that that was such an important and memorable thing in his life because it was never once shown.

I don’t know. I’m just going to close up this review by quoting directly from Kevin Hogan’s review here on the Flixter from 197 days ago: “It’s nothing particularly special–the dialogue is bad, the acting is amateurish, and the war commentary is hopelessly tacked on.”