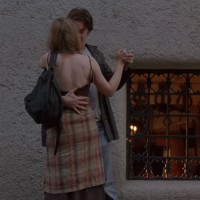 A short synopsis of director Richard Linklater’s true-to-life romance Before Sunrise might make it seem less than exciting. Jesse (Ethan Hawke), an American boy, meets Celine (Julie Delpy), a French girl, on a long train ride stopping in Vienna. After some cajoling, Celine agrees to disembark despite the fact that this is not her stop, just so the two can get to know each other a little better. That is, they spend the rest of the film walking around Vienna as the sun goes down, much of the time doing nothing more than talking to one another in heady philosophical or political ways. And it’s brilliant.

Not for what they say, really, much of which eludes me now a week-and-a-half removed from the viewing. Rather, the movie is incredible simply for the honesty and realism shown through their interactions. When they first get off the train and begin walking together, there is a brief silence before Jesse admits, “This is awkward.” It’s not long before they overcome that initial awkwardness, but it makes sense that that period of weird uncertainty would exist. I make this comparison too often, but I went in thinking that the movie might resemble one of my favorites: Say Anything. One part of that movie that always impressed me is when the shot stays on the teenage couple as they have a conversation on the phone – a short argument about whether or not old people are unsettling or sympathetic. It would be easy to show the conversation in silent montage, but the movie chooses instead to remain in the present with the characters, to actually show the relationship develop through what is a mundane and uneventful disagreement. In many ways, Before Sunrise captures that same aesthetic.

Neither Jesse nor Celine are entirely likeable. Their adventurousness and literateness make them compelling, sure, and they’re easy to watch on screen as both are attractive young people in a beautiful European city. But then a fortune teller gives Celine a bit of vague life advice in a patio cafe, to which Jesse reacts with unabashed mockery. Celine admits to somewhat radical political views that paint the entire world as fascist. They’re not entirely likeable, not faultless fictional characters who we as viewers are expected to stand behind without question. Instead, they’ve got their own strengths and weaknesses, their own quirks and annoyances, their own memories and desires, all of which put together makes them into remarkably human characters. They feel lived in, like real people instead of constructs of a writer’s imagination.

One moment that comes to mind in this vein is a scene where the two are sitting in the back of a bus shortly after their decision to spend time in Vienna together. Jesse suggests they play a game of 20 Questions to break the ice. His first question is perhaps a bit boorish, but nevertheless it says something about his character and desires while also functioning as an attempt at feeling out the contours of what this “relationship” might be. He asks her: “Describe your first sexual feelings about a person.” She skirts around the subject a bit, telling a story about a crush she had without getting specific about any especially sexual feelings – her answer dancing the line between revealing and withdrawn. She follows up with an equally meaningful question: “Have you ever been in love?” It might be easy to write off as the stereotypical concerns of young adults, but in the context of whatever it is they have with one another, it’s a way for each to ask implicitly where the other sees the evening heading. And Jesse’s curt, one-word response to Celine’s question – “Yes” – suggests a still deeper well of emotion.

Then there’s the soft, small moments of pure romance. A scene in a ferris wheel, high above  Vienna, wherein Jesse realizes that it’s the perfect cinematic moment for a passionate kiss… and yet isn’t sure how to make the moment in his mind a reality (and Celine’s own recognition, in turn, of what Jesse sees in his mind). The sweet moment I’ve chosen for a thumbnail, as the couple dance to the sound of a man playing a harpsichord alone in his basement the morning after their long night together. And my absolute favorite, where the couple go to a record store to browse the selection and decide to use a listening booth to sample one of the albums. This is still early in their time together, a time when they’re both nervous in their interactions. They stand close together, as they must in the cramped listening booth, looking off to the side of the frame as they listen to the music; each glances furtively at the other at various times while the music plays, a tiny, cute affectation that helps to sell their nervous attraction to one another.

And it’s all this added together that makes the movie so special. They walk along the cobblestone streets, pausing briefly to watch a belly dancer on the curb, then continuing on while discussing the genesis of feminism and whether men invented it as a way of taking advantage of women sexually. They tiptoe around personal details about themselves, or else paint their negative attributes in hyperbole to see how the other responds. Celine talks at length about a friend’s worry that she might kill her ex-boyfriend, mostly I think as a way of gauging Jesse’s reaction. Jesse suggests that if they stayed together longer than a night, the two would eventually grow tired of one another and he immediately demands that Celine tell him what she finds annoying about himself. These little acts of self-defeatism are utterly natural and human, and each is looking for someone willing to overlook or discount what they see as personal failings.

It’s wonderful. It’s real, and it’s somewhat messy in the stream-of-conscious way the two talk with one another, pseudo-intellectual musings about soul division and all. It’s sweet and it’s heartwarming and the characters are frustrating and endearing. It’s a very good movie, and even more impressive because it’s the first in what has become a long-term character study (as of this writing, there are two additional films in the series–each coming after a 9-year interval). Before Sunrise is a striking work of art, very simple yet full of wonders.