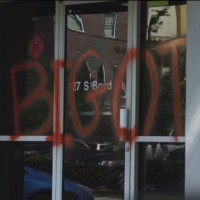 In 2008, the American Family Association (AFA) – an acclaimed hate group – released a short video entitled They’re Coming to Your Town. The 30-minute film was a documentary about the insidious gay agenda, which it claimed was seeking to take over America small town by small town; the takeover began in Eureka Springs, Arkansas. The past six years have seen a seismic shift in the public perception of gay rights, quickly making They’re Coming to Your Town a bizarrely anachronistic piece of hate-filled propaganda. For whatever reason, I’ve been unable to find a single copy of the video for sale online – my suspicion is that it’s been done in an attempt to purge the memory of the video from history. AFA takes a somewhat softer tack in Accidental Activist – the main character even has a gay friend! Yet the movie remains a strange paean to homophobia which will undoubtedly become quickly dated and seen as an embarrassment. I knew that I needed to claim a copy of the film before AFA had a chance to sweep it under the rug, too.

The film stars Larry Bukovey (the bargain brand Greg Kinnear: indistinguishable, except for the price) as Ted, a good hard-working family man who started his T-shirt screen-printing business “from scratch”. After getting ice cream with his kids one day, he is stopped by a woman at a table asking people to sign a petition. When Ted asks what it’s about, she hems and haws before answering, “We’re just trying to protect traditional marriage.” It almost seems like she’s trying to downplay the goal of the petition, suggesting to me that she (if not the filmmakers themselves) are aware that their position is something to be ashamed of. Ted thinks that sounds like a fine idea and puts his name on the line.

Before you know it, he begins to receive obscene phone calls at his home, upsetting his wife and children. He goes to work the next day to find the word “Bigot” spray-painted in red across the windows of his T-shirt store. What could possibly be causing this? The entire chain of events is, yes, inconceivable. Ah, but Ted’s good friend Ron, the aforementioned gay man and owner of a coffee shop nearby (everybody got dat entrepreneurial spirit in this town) clues the clueless Ted in by showing him the latest copy of Equality Today, which is, quote, “one of the city’s gay newspapers.” ONE OF. As in: there are many gay newspapers in this small town. The newspaper has printed the names, addresses, and phone numbers of all the people who signed the petition… which turns out to be just Ted, apparently, because all of the retaliation is focused on him and his family. An intriguing moment in the conversation comes when Ron asks Ted, “Did you sign the anti-gay marriage petition?”

Ted’s response: “No, I’d never sign something anti-gay.” Wait, are you sure the American Family Association produced this movie? The same organization which, in May 2014, urged its minions not to accept mail bearing stamps showing slain gay activist Harvey Milk? In any case, Ted did sign something anti-gay, and is totally perplexed when Ron has to hold back tears of anger and sadness while telling his friend of twelve years, “You’re stabbing me in the heart here.” Ted later tells his wife that he didn’t do anything wrong here and thinks that Ron should apologize to him. Wow.

So now there’s picketers outside Ted’s business on a daily basis, led by the sleazy social activist Vincente Ramos. Ramos has a closed-door meeting with Ted’s landlord to discuss the future of the location once the T-shirt shop goes under; since Ramos’ organization is getting a lot of attention – and consequently a lot of donations – they’ll take the property once Ted’s out, and at a higher rent, too. That shouldn’t take too long, given that Ted was already three months behind on his rent before the picketing started; the numerous clients who begin cancelling their orders afterward are just the icing on the cake. Incidentally, Ted does pick up a few local churches who just want to support local anti-gay business (oh, sorry, I’m sure they would never support something anti-gay). Still, it seems that his business is destined to go under. Ted’s wife whines that it isn’t fair that their landlord won’t give them an extension on the rent. Is three months not enough of an extension?

Ted does get a chance to tell his side of the story, luckily, when a news van comes and interviews many of the people involved in the protests. Ted continues to be baffled by the whole thing, asking of his petition, “Why is it automatically hatred and intolerance… because you disagree with me?” Yes, Ted, there is no context whatsoever – it’s a simple matter of disagreement. They would also be picketing your store if you preferred crunchy over smooth peanut butter, just because they disagree with you. Keep livin’ that lie. Ted gives an interview with the on-site reporter for 20 minutes in which he gives all of his many reasons why marriage should just be between a man and a woman, but we as viewers never get to hear all these air-tight reasons because almost the entirety of his interview was edited out by the liberal media! It’s just another attack on a good man who simply has a mild disagreement over a silly, inconsequential thing like civil rights.

Nevertheless, Ted gets another chance to speak his mind when the son of a black woman he… does chores for?… comes to visit him. The man is a pastor; he’s seen Ted’s pain and thinks the picketing is a great opportunity for Ted to speak out and tell the truth about marriage at a rally downtown. But actually, this isn’t just about marriage – it’s about religious freedom. Ted and Ron try to patch things up between them, but it all crumbles again because Ron just can’t understand how personal and important religious freedom is to Ted. “We’re not pushing anything on anybody,” Ted claims, “we didn’t start this fight. The Christian view was here first, if you’ll remember. This country was founded on it.” The lack of self-awareness is astounding. It’s the same mindset that criticizes gay activists for preaching tolerance, but being intolerant of, uh, anti-gay organizations and individuals like Ted here. If you can’t see why fighting against civil rights does not deserve respect, it’s no wonder you’re in a movie produced by AFA. (As an aside, I don’t really like using this word “tolerance” anyway, as it seems to imply silent hatred rather than acceptance.)

Before Ted can be fully convinced to join the rally against gay marriage, though, he speaks with Miss Dorothy, the aforementioned black woman, for guidance. She tells him that though she doesn’t doubt gay people are experiencing bad times, black folk know real bigotry – and they’re tired of Christians being called bigots for their beliefs. Again, this mindset is incredible to me: shouldn’t “black folk” be particularly wary of any violation of a minority’s civil rights? Unfortunately, as a Christian, Miss Dorothy is in the (current) majority and that tends to have a blinding effect. History doesn’t teach; it makes numb. Miss Dorothy tells Ted she’s tired of hearing about how “gay is the new black”, then tells him a story about her father. He disappeared (likely killed) during the tumultuous time after slavery ended when convict leasing was Constitutionally approved. Also called peonage, the system was essentially slavery by another name. She hands Ted the only photograph she has of her father and, again, with a total lack of self-awareness, encourages him to lead the anti-gay rally: “Some people don’t get a chance to fight back.”

Hold on a minute. I want to make sure I’m getting this right… Miss Dorothy is telling Ted that the gay community is wrong for comparing their struggle to that of African-Americans, yet Ted’s fight against gay rights is comparable to her father’s struggles under de facto slavery? Miss Dorothy, are you seriously telling me that homophobia is the new black? That sound you just heard was a million jaws dropping in stupefied amazement at once.

So Ted gives the speech, which is short and, unsurprisingly, unconvincing. He makes an impassioned plea to tradition, talking about the faith of our nation’s Founding Fathers and how that’s what this country was founded on. It seems strange to sing the praises of men who fully endorsed slavery mere minutes after having a heartfelt conversation about how bad it is. He talks about how patriotic he is because he’s utilizing the 1st Amendment by standing up for what he believes in. Yes, yes, the 1st Amendment is good – that doesn’t make everything it protects good by association. For some reason, Ted’s speech touches the hearts of all in attendance (not a huge group, honestly), with each becoming teary-eyed and nodding in agreement. Among those at the rally is the previously unapproving news reporter, also nodding her support of Ted’s defense of anti-gay rhetoric.

After the rally, Ted and his family are walking away, arm-in-arm and with huge smiles on their face. So their business has almost certainly failed as a result of the picketing, the lives they’ve built for themselves over the last decade destroyed, their future and that of their three children uncertain. At least it was all worth it when Ted remained steadfast and stood up for what he believed in, i.e. curtailing the rights of minorities. Suddenly, there appears on the horizon another woman with a petition. Her sign reads: “Pro-Life? Sign here.”

Ted gives his son a knowing smile, and the camera rises as his family walk down the street into the sunset. Credits roll. Wait, so, he didn’t sign, then? He’d had enough standing up for his beliefs for one day? I don’t get it. I don’t get Accidental Activist, as in why it even exists in the first place. I understand it’s a way to rally AFA’s troops, but what a despicable thing to rally around. It’s not as shrill and panicked as I assume They’re Coming to Your Town must be, but ultimately I suppose this film is little more than what I anticipated when I bought it: a curio from a darkened age, one which we’re rapidly escaping.