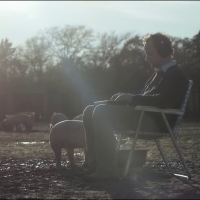 Director Shane Carruth has exactly one other credit to his name – the indie time travel flick Primer – a movie so convoluted and intelligent (or just good at faking it) that the man has hence been hailed as some kind of revolutionary. I’ve seen him compared to Terrence Malick, and I don’t know whether it’s just the huge amount of time between projects that fuels that analogy. It’s been nine years since Primer, and now Carruth comes back with Upstream Color, no less densely packed and resistant to easy analysis. People have said, of both films, that they require a second viewing. Much as the film is resistant to analysis, I’m resistant to the effort it allegedly wants me to expend; it’s one thing to benefit from a repeat viewing, but it’s something far less admirable, in my opinion, to require it.

To the extent that there is a plot, it concerns a couple – a woman named Kris (Amy Seimetz) and a man named Jeff (Carruth) – and please understand I use the term ‘couple’ in the generic sense, to mean “two people” rather than “romantic pairing”. Though Kris and Jeff fall into marriage later in the film, it seems perfunctory. There is no chemistry between them. Beyond these two is a lot of cuckoo science fiction nonsense about hypnosis maggots used to steal bank account information, avatar swine that the human characters feel some connection with, and something about blue orchids. The pigs are in the care of a man known in the credits as “The Sampler”, an older fellow who scrapes rocks along a drainage pipe to hear the sound and who inexplicably enters into the background of other people’s lives. It’s a wonder I got this far before writing the word “inexplicable” or some variation thereof. Who is The Sampler? Is he supposed to be God? Is he supposed to be the embodiment of some emotional state?

I find myself assuming that he’s representative of something else. In fact, the absurdity of the whole plot has me feeling that it’s all metaphors for something else. I discussed this briefly with a friend who agreed that there was something important to the film about the characters’ lack of passion, and about their loss of identity (Kris and Jeff get into arguments throughout the film about which of them owns a particular memory). The movie itself repeats scenes and dialogue – particularly a conversation about whether a flock of birds might be starlings. But it’s hard to find anything useful in that formlessness, at least nothing beyond the very basic concept of “lack of identity” as a thematic device. My friend called the film cold, noting that it “has ideas that are interesting to me, but those ideas aren’t quite as affecting as Carruth thinks they are on the whole.” I see the problem as more engrained: it has thoughts that are interesting, but no ideas.

I didn’t really like The Master, P.T. Anderson’s most recent work, after I saw it in the theater. I’ve lately been wanting to give it a second chance, so perhaps time will make me more receptive to Upstream Color as well. In any case, in my review for that film I complained about it’s seemingly intentional obtuseness, faulting the movie for “forc[ing] its audience to make their own metaphors”. Yet at the same time, I loved The Tree of Life – arguably as free-form as this film, in that it jumps around in time and to strange otherworldly beachscapes on a whim. I straight up declared Rubber the best film of 2011 even though its stated thesis is to serve as a celebration of “the no reason”. So why do I love some seemingly random, indecipherable art films while finding others hard to stomach? I want to blame it on this “ideas” vs. “thoughts” dichotomy that I suggested above. In Rubber, “no reason” doesn’t just mean an absence of clarity – it’s a theme unto itself, the justification for anything that happens on-screen is in the fact that the viewer is tempted to question it at all. Put another way: there’s a unifying idea behind scenes that might seem aimless or random, and that idea pervades the film to direct your thoughts or interpretation about it. The Tree of Life is very clearly interested in a theological binarity, of good versus evil, etc. If you start to think about whether there really is such a thing as good and evil, it’s still using the initial outline as a platform to shoot off from.

In contrast, I don’t see anything cohesive to ground Upstream Color. Its components are scatter-shot and provide little to grip onto. They’re thoughts instead of ideas, vague notions that cloud the camera but don’t draw the viewer’s gaze. A lack of identity, or selflessness. Period. I don’t know what to do with that. Instead of giving the audience an idea to build from and suggest counter-points to internally, this film seems to drop broad thoughts with no direction to them. Loneliness. “There it is, do what you will with it,” Upstream Color seems to say. Now return to The Tree of Life: there are strong suggestions that the parents of a young boy are representative of Nature and Grace. As a result, there’s a rich well of philosophizing that a viewer is liable to entertain when the boy asks his father (Nature), “Why should I be good when you aren’t?” Now back to Carruth’s film. When Kris encounters her pig avatar, what does it mean? What significance? Something something accepting yourself? It’s hard not to feel that you are doing all the work for the movie, rather than the movie giving you anything to work with. Frustration. Is that part of the movie’s themes, and it’s trying to get its concept to work itself out in real life through the viewer’s failed attempts to connect with it? Or is the truth in the worry I keep coming back to: that any thoughts I think I have about Upstream Color are just what I’ve projected onto the movie, not what I’ve gleaned from it?

There’s definitely some-thing in Upstream Color, those “thoughts” I mentioned which aren’t adequately developed. Consequently, though it’s tempting to give the film–and to some extent Carruth because it’s hard to deny he as filmmaker is being judged here just as much as the film he’s created–credit for having some-thing at its center, I can’t do it. There may be a core here, but it’s too inscrutable to try to take seriously.