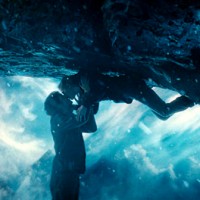 Oh sure, I’d heard some bad things about Upside Down floating around the gossip chamber. And I did find it strange that despite its striking tableau–two worlds within a mile from each other, and with opposing gravitational forces, so that the characters from one world see those on the other world “upside down”–its theatrical release was extremely limited, if there even was one at all. But I braced myself for that, sort of. Maybe the ideas don’t work very well, I reasoned, but certainly I can appreciate the attempt. I expected something maybe like Richard Kelly’s Southland Tales: bloated, overwrought, ultimately a victim of its own ambition. I couldn’t have been more wrong.

Upside Down has no ambition. Its world isn’t something the film uses to its advantage, twisting maniacally to disorient viewers and keep them on edge. Instead, it’s little more than a gimmick. When Adam (Jim Sturgess, Across the Universe) begins a new job at TransWorld, the all too aptly named shadow corporation that runs the economy of both worlds with evil business savvy–a job, I would like to point out, that Adam just suddenly has, with no explanation given–the camera looks on, awestruck at the huge CGI office with hundreds of cubicles on both the ceiling and floor. Yes, perhaps it wasn’t clear, but the laws of physics in this world are such that objects (including people) are indelibly tied to their home planet; therefore, it is possible to have items in one location fall in totally opposite directions thanks to the magic of suspending disbelief. Yet it means nothing. Yes, there’s a uptown-girl/boy-from-the-wrong-side-of-the-tracks plot that hinges on the xenophobia of the respective planets, but aside from this there is no purpose served by the planets except for creating interesting establishing shots and allowing for stupid jokes. Let me draw your attention to one particularly astounding scene, wherein Adam–who has found a way to the other world by lining the inside of his suit with weights (seriously)–retreats to the restroom to use the urinal and finds the stream splattering all over the ceiling. What are we, ten years old?

The two-worlds gimmick is also a problem because it takes the viewer (or at least this viewer) out of the movie: it’s hard to stop thinking about the mechanics of it. We are told that a substance from one world that is taken to the other world erupts into flames after enough time has passed. How does the item know it’s in the other world? I mean, if I put a book on a table, how does it know whether it’s being acted upon by normal gravity or if it’s being prevented from falling by something trying to pull it down to the other world? More specifically, there’s an absurd restaurant that Adam and his star-cross’d love Eden (Kirsten Dunst)(get it, Adam and…Eden?) eat at where they drink alcohol out of upside-down martini glasses. What? Wouldn’t the glasses fly up to the ceiling?

But those complaints are small potatoes in comparison to the absolute train-wreck that bookends the movie. I hate to get into spoiler territory, but this is one that absolutely calls for it. I’m giving you time to back out now, dear reader. Okay. At the start, Adam goes into an immense amount of needless exposition. Some of it is acquainting the audience with the “rules” of the universe, which is fine, but then it goes on and on into stuff that doesn’t even matter, like the fact that our hero liked model airplanes as a child. Um, okay? If that information came back to be important in any way, maybe it would be less insane. There’s also a long description about his relationship with his aunt Becky, a woman who is carted away almost immediately and her house burned down because of her connection to a mysterious pink pollen made by interplanetary bees. It’s unclear what the purpose of burning down the house was, or of Becky, actually, given that she is never mentioned again after this. Par for the course in Upside Down, a movie which takes great pains to remind its viewers that it doesn’t really understand or care about the loose ends of its plot.

Adam, who is not carted away by the shadow government, grows up and continues experimenting with this bee pollen–a substance which makes an equally good face cream and anti-gravity potion. How he is able to continue retrieving this pollen, why nobody else knows about it (despite the government’s apparent willingness to commit arson in order to protect it), how Adam has managed to turn it into a face cream or how he transforms it into an free-floating anti-gravity bubble… UNIMPORTANT. But okay, since you’ve been good, I’ll skip ahead to the ending. Adam, who has gotten under the skin of TransWorld by showing them his magic face cream and then hiding the secret ingredient, is kidnapped and beaten by thugs working for TransWorld, then left bruised and bleeding in the street. Seemingly within minutes, Adam’s friend Bob from the other world runs into the shop where Adam works at a second job, exclaiming that he bought the patent for the pink pollen before TransWorld could! Hooray! Wait, what? You bought the patent? What the hell are you talking about? Who did you buy it from? And is a government that eliminates people and burns down their house for dealing with pink pollen, much less an evil corporation which kidnaps people and beats them bloody, just going to throw up their hands now, “Oh no, you have the patent! We’re powerless to intervene now!” Question mark. Oh, but the really choice moment has not come yet.

Adam meets Eden on the top of a huge building – ohmygawd she’s walking on the same planet as Adam! But how? “I’m pregnant,” she says. “Twins.” Somehow the fact that she’s pregnant with twins makes her able to switch gravity. “Bob said you’d understand,” she says. Maybe Adam does understand, but the people watching the movie don’t. It doesn’t even have anything to do with the anti-gravity pollen bubbles! Unless she ate some pollen bubbles before switching gravity, but if she did she forgot to say it. The camera zooms out and swirls around and everybody lives happily ever after and–hold up, did the movie really just wave its hand and change the subject when we asked it what exactly is going on? Yes. Yes it did. She might just as well have explained this weird development by saying, “Something, something, I don’t know, whatever.”

Upside Down is so weird and dumb and bad. It cuts corners and leaves plot holes and has extraneous characters and ideas. It’s not a misunderstood work of art that falls on the sword of its own ambition; it’s more a gangly freak that falls on its face after stepping on its own feet.