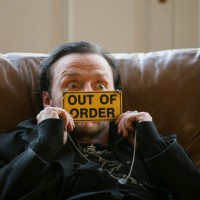 “As in all of Wright’s films, the surface is just as satisfying as the subtext: hilarious comedy, compelling character drama, eye-popping visuals, and a juicy science-fiction story.” — The Dissolve

“It’s a testament to their talents that The World’s End feels so complete, but still leaves viewers wanting more.” — AVClub

“You might not expect a slapstick comedy about middle-aged pubcrawlers brawling with superhuman extraterrestrial invaders to have brains, heart and wisdom, but that’s ‘The World’s End,’ a rare film that’s as much fun as you’ve heard.” — Matt Zoller Seitz, RogerEbert.com

Look, let’s be honest with each other here and dismiss with the formalities. If you’ve seen the movie, then you already know the names of the characters and the general outline of the plot. If you haven’t seen the movie, then even if I fill you in on some of the particulars, it’s probably not going to mean much to you. So let’s just cut to the chase here, and I’ll just say what I’m thinking. What I’m thinking is: No.

Even immediately upon leaving the theater, I was aware that The World’s End, the third in the Simon Pegg/Nick Frost comedy trilogy directed by Edgar Wright (the other two being Shaun of the Dead and Hot Fuzz) was the weakest of the bunch. I hadn’t yet put into words the reasons for it limited effectiveness, but I suspected it had something to do with it simply not being as funny as the others. That is true–it’s a ways into the movie before the comedy finds its footing and begins to feel more natural. At the start, it hinges a lot on the too-cool-for-school way that Simon Pegg as Gary King reacts to people around him, a routine that’s never all that amusing.

After discussing the film with a friend, however, it became clear that what the movie is almost entirely lacking is an emotional center. Allow me to briefly explain the heart of the lack of heart. At the start of the film, Gary in voice-over introduces the viewer to the five members of his group of schoolyard pals. In particular, he draws our attention to Andy (Frost), of whom he says matter-of-factly, “He loved me. And I loved him.” However, decades have passed without the group talking to each other now, and Andy in particular seems to bear a deep resentment toward Gary. What could have happened that would drive such a wedge between two former best friends? As it turns out, after an attempt at tackling The Golden Mile (drinking at 12 different pubs in a single night), the two friends got into an awful car accident while driving home. Gary ran away, leaving Andy to face the repercussions on his own; the two haven’t spoken since.

Whoa. That’s… wow, that’s pretty heavy stuff. Now Andy has not had a drop of alcohol in years because of the sour memories associated with that night. It’s clearly affected him in an immense way, and I can’t say I blame him for taking it so hard. And yet when Gary appears at Andy’s straight-laced office at the start of the film, casually throwing his feet up on the desk and pressuring Andy to re-enact that night with him, there is absolutely zero emotional resonance. At this point in the film, we know that Andy is upset with Gary, although we do not yet know the full extent of Gary’s crimes. But the characters both certainly do, and yet Gary’s sudden appearance and happy-go-lucky attitude are presented as largely an annoyance, rather than the emotionally debilitating moment it must have been for the two men–especially for Andy. Well, maybe they were hiding the extent of their emotions under a tough exterior. You know, men. Except that when the cause of Andy’s resentment is named aloud later in the film, nothing comes of it. It’s spoken, then almost immediately forgotten. By all accounts, the two are and have always been best friends. Andy in fact abandons his self-imposed moratorium on alcohol, an act which seems as though it ought to have great significance, without any clear justification for this sudden shift in attitude.

This failure to treat the emotional lives of the characters in any serious manner is carried well into the finale. After the group of friends re-enact their teenage pub crawl, they disband and never see each other again. Wait, what? So not only is the movie going to avoid seriously addressing the elephant in the room that is the car accident, it’s not even going to have the newly-reunited friends remain close to one another at the end of the show? What kind of scam are they running here?

Perhaps instead of emotional sincerity (who needs it!), one should focus one’s attention on the action sequences. Not to give more away than I already have, but suffice it to say that the film changes course when the gang learns that [unspecified science fiction event] is going down in the sleepy English hamlet of Newton Haven. Uh-oh! There’s a fair amount of comedy to be had as the group races from pub to pub in a vain attempt at finishing The Golden Mile in spite of the [science fiction element], each new locale serving as the scene for an increasingly outrageous bar fight. For all my negativity, let me re-state that once the movie does find its bearing, it has some wonderful comedy… it just takes a little while before that component clicks into place. Yet behind this is the action, an aspect which makes me think of something I read about the giant-robots-fighting blockbuster Pacific Rim. When seeing giant creatures destroying famous cities becomes commonplace, as it has thanks to the magic of the movies and CGI in particular, it becomes difficult to be impressed by even the most extraordinary demolition. In a similar fashion, the bar fight sequences in The World’s End are good fun, but after two earlier movies that tread similar ground, there’s not a lot new to be had from them. (Granted, there are a few striking moments, but I’m speaking of the fights generally.)

So yes, by not being bowled over by The World’s End, I’ve found my assessment of it growing less and less positive the more I consider it. I still think that, overall, it’s a fun time at the movies. It has some strong, humorous moments and the occasional exciting bit of action. But in some ways, it feels obligatory (see, e.g., the fence joke) and I find it hard to forgive the carelessness with which it handles what should be a rich emotional dialogue between its key characters. It’s still a good movie, but it just can’t live up to its predecessors.

One Response to “The World’s End”