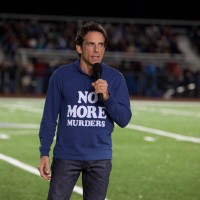 During my first year of law school, I’ve been writing most of my reviews in an abbreviated form which I’ve been posting on GTTM’s Facebook page. In fact, I just added a new short review to the page today – a quick and dirty review of Head Games from legendary documentarian Steve James, which seems like the sort of thing that would normally warrant a full review… at least more so than a failed Ben Stiller comedy which serves largely as an outlet for product placement (hello, Costco!) and weak, predictable storytelling. Yet while I do like to write full reviews to draw attention to worthwhile films and/or remarkable artists, I also find myself compelled to write a full review when there’s some aspect of a film I want to spend some time talking about, regardless of the movie’s worth otherwise. A good example of this is Alien: Resurrection, a movie which is unquestionably bad but which fascinated me so much that I was excited to talk about it.

A better example would be the whole of the Predator series, and this is actually getting to the heart of what I want to discuss with you now. When I watched Predator and its various sequels, prequels, and cross-overs, I couldn’t have cared less for the human protagonists whose fate I was ostensibly supposed to be invested in. Instead, I was constantly thinking about just what the Predator was; what every new piece of information provided about the creature meant about its species as a whole. For example, the Predator is shown to be able to record and mimic human speech patterns, using specific phrasing in an intentional way to convey messages in English to human characters. The movies, I’m sure, just wanted the Predator to be able to make a quip every so often, but I felt that there was so much more interesting depth to the character of the Predator than its movies were letting on. What does it mean about the species as a whole that this alien, humanoid creature can apparently understand and employ English phrases?

Totally ignoring the stupid improv comedy of The Watch for the time being, the story proper concerns an all-American guy named Evan (Stiller) who decides to create a Neighborhood Watch group to monitor suspicious behavior in his small town after one of his friends is brutally murdered. Actually, let me stop for a moment to point out that this is a bizarre way to set the movie in motion. Fellow Neighborhood Watch members Vince Vaughn, Jonah Hill, and Richard Ayoade act extremely juvenile while they are literally on a stake-out to catch the person responsible for a gruesome murder. It’s difficult to appreciate their “humor” while the thought of a murder victim with his skin peeled off remains in the back of the viewer’s mind.

In any case, the movie makes no attempts at hiding the fact that the killer is a space alien. It’s not long before the group runs into one of the aliens and finds out that the creatures are killing and skinning human beings, then wearing the skin as a sort of disguise to work their way into human society while constructing a doomsday device in a hidden location. The movie doesn’t really take this conceit seriously, but neither does it treat it in so light a fashion that it could be argued the character interactions were truly the heart of the film. Instead, The Watch sits irritatingly in-between, having the Neighborhood Watch hide fearfully in the bushes outside the home of a suspected alien, but then allowing Vince Vaughn to go off on a subplot about preserving his daughter’s virginity and get into an argument with Evan about his priorities. To Evan’s credit, he seems to understand that the fate of the planet is at stake, but the movie sides with Vaughn. To the movie, the stakes are much lower… even as the film culminates in an armed attack on the alien hive to destroy the bomb they’ve been building. I guess The Watch just sees its conclusion as foregone, and it’s that lazy attitude that keeps the film from being worthwhile in a dramatic or comedic way. Also preventing it from being worthwhile in a comedic way: the movie just isn’t funny. The aliens’ weakness is revealed when the gang learns that their brains are located in their genitals, so… yeah, that’s the quality of humor on display here.

But let’s talk about those aliens. Much like the Predator, they’re humanoid though quite a bit taller and bulkier than a human being on average. How do they get into their human skin-suits? More to that point, how do they wear a deceased person’s skin in such a way that they could possibly pass for alive? See Men in Black for an example of the awkward way that the dead person’s skin should hang on the creature inside. The logistics aside, how do they know English so well – and in a manner that allows them to replicate the voice patterns of the person they’re pretending to be? This suggests they’ve been on this planet for a long time, as does the immense alien hive underground. How did they get here, and why? How on Earth (pun only intended after I had already written it) does it make sense to travel to a foreign planet, incorporate yourself into the alien culture, learn the alien language and maintain the relationships of the person you’re pretending to be… all in service of apparently destroying the planet? The movie, unsurprisingly, isn’t equipped to answer this question. “We’re aliens,” one of the aliens shrugs, “it’s what we do.” Also: they refer to themselves as aliens? Aren’t we the aliens, to them?

I know what you’re going to say, and I’m not going to deny it. You’re thinking too much about it! It’s true, it’s true, these aren’t thoughts that the movie invites or encourages in any way. But why not? For comparison, even the most crowd-pleasing time travel movie (is it safe to use Back to the Future as an example?) feels compelled to deal in the philosophical and logistical issues inherent in the use of such a remarkable technology. Why do alien movies feel that they can get away with just planting English-speaking extraterrestrials into the action without addressing the elephant in the room: the implications inherent in the existence of these specific aliens. Am I in the wrong for wanting the science part of my science fiction?

Or is The Watch less science fiction than just childish fantasy? Either way, this viewer was left wanting something more.
Something else.