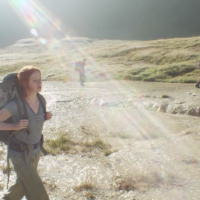 I think that this is a case where the whole works better than the parts. It’s almost an understatement to say that The Loneliest Planet is a divisive movie for audiences. At times, it can be almost unbearably slow as it follows three characters – Nica (Hani Furstenberg), Alex (Gael Garcia Bernal), and their tour guide Dato (Bidzina Gujabidze) – on their trip through the Caucasus Mountains in the country of Georgia. Often, the camera will be stationed from afar while strains of screeching music plays and we watch the actors so small on the screen as they plod across the frame. It’s understandable that some viewers would reject this simmering rising action, taking it as a sign that the film is plot-less or has been unnecessarily padded to make a short story into a feature-length film. Truthfully, I found myself entertaining those same thoughts, at times. But then there is an incident that occurs which changes everything for the characters.

Whether to provide even that much information is a bit of an ethical dilemma. I agree fully with the AVClub’s contention regarding the incident that “[s]poiling it here would diminish its power and surprise”, but reading through comments from other viewers there seems to be disagreement on whether knowing in advance that there is such a significant incident enhanced or reduced enjoyment of the film as a whole. Ultimately I feel that, for myself at least, knowing that there was an incident for which I should be watchful and the uncertainty of what it might be left my stomach in a twisted knot throughout this rising action. I kept looking for signs of what was to come, and when during their hike through a valley Dato suddenly stops the tourists and motions for their complete silence, the tension was thick. The characters stand stone still and listen carefully around them. For what are they listening? Footsteps? Voices? Thinking about what it would mean if there were another set of footsteps following behind them, our minds can’t help but jump to the worst-case scenario. I don’t intend to give out any clues about what sparks the incident, but I do believe that being put on notice made me uneasy in a way that I found very rewarding afterward.

A major theme within The Loneliest Planet, which you may have been able to surmise by my having revealed that the movie is so slow and “uneventful” for much of its runtime, is that of nonverbal communication. Rather, communication in general is the theme: whether it be nonverbal, misunderstood, or non-existent. At the start of the film, Alex and Nica are speaking with locals and laughing with them in their native tongue. There is no translation via on-screen subtitle as one might expect, and after a few minutes of this I began to wonder whether perhaps I was watching a copy of the film which had been released without subtitles accidentally. But no, that confusion is intentional. When the three travelers begin their journey and Dato begins to tell a story about Chinese castration in broken English, it is unclear what point he is trying to make, whether it is a true anecdote or merely a politically incorrect joke, or how the young couple is expected to respond. It would be unseemly to ask, so they laugh as they believe they are supposed to. But there’s so much more communication between the lines: take, for example, the way that Alex follows close behind Nica throughout the trip, the way the two of them remain together as they go off to explore areas away from Dato, their affectionate touching and rolling around in the grass. What does the opening shot of a nude, soaped-up Nica waiting to be rinsed off by Alex say about the nature of their relationship and their reliance upon one another? There is a lack of verbal exposition – this is a movie that is consciously building its characters and their dynamic via unspoken cues. A lot of movies do that, obviously, with the use of color and music and the way that the actor carries him or herself or the way the character is dressed. But I can’t think of many which have put such an emphasis on non-verbal communication and/or the important role that lack of communication makes in actuallyfunctioning as a form of communication. And that lack of verbal contact between the characters allows only suggestions of the internal struggle that each has. When Dato stops the troop cold in the scene I described above, the uncertainty of what to expect is as much rushing through the characters minds unspoken as it through the viewer’s.

Communication is hardly the sole theme of the film, though again the others go mostly unspoken. There’s a certain emphasis on the (perceived?) importance of sex – biologically speaking, not pornographically – which our attention is obviously drawn to by the opening shot, but which comes up multiple times later as Nica slips on some loose gravel on a hillside, for example. The men reach out to steady her, but she pushes off their assistance and indicates that she is alright. Dato previously expressed concern that Nica would be unable to carry a large backpack on such a long hike, suggesting that he thinks of her as “weaker” in some way and this misstep brings that thought to top of mind again. Do Dato or Alex see her as weak in that moment, as a result of her sex? Does she see herself that way, or feel that they see her that way and feel the need to over-correct? None of it is spoken aloud, of course, leaving these tensions bubbling just under the surface. And then there is the very powerful question of instinct versus choice, of who a person truly is. For example, do the character dynamics change when Dato reveals that he was a soldier in a war two decades ago? Certainly we see him in a new light, but at his core is he a “soldier” now that we know that, and if so what does that mean? All of these lines of thought are invited by the incident, making for a suspenseful, beautiful, philosophical film.

There’s no question that The Loneliest Planet is not going to appeal to everyone. But those who are able to appreciate its methodical presentation, its ambiguity and its rich well of emotion will find it endlessly fascinating. It’s a movie that feels its way through mysteries rather than shining a light directly upon them, and that choice puts a renewed focus on the texture of those mysteries, to wonderful effect.