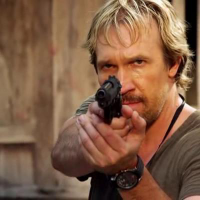 This sequel to 2010’s The Ecounter, about a group of strangers who end up eating a diner run by Jesus when they have nowhere else to go during a thunderstorm, significantly ups the ante. Its primary characters include an international drug dealer, a D.E.A. agent who isn’t afraid to bend the rules when necessary (David A.R. White), and a couple on the verge of divorce. Instead of a small diner, the group is trapped in a palatial resort in Thailand on the cusp of a potentially deadly tsunami. But the biggest difference between the two movies is that in first movie, Jesus (Bruce Marchiano) did not have people pointing guns at his head, yelling, “I swear, I’m gonna kill him!” At least notquite as often.

D.E.A. Agent Rick Caperna follows drug dealer Bruno to this resort where Bruno gets the upper hand, taking Rick and the couple who own the estate as hostages. Prior to this event, the couple — Chris and Helen Ward — were in emotional turmoil as a result of their inability to cope with the death of their son in the massive tsunami that hit the county on December 26, 2004. In fact, the movie opens with a title card describing the devastation of that, ahem, “act of God”: 230,000 people were killed. It would be tempting to wonder, since this is a movie about Jesus literally entering the picture to change people’s lives, why he was unable to prevent such a catastrophe. Tempting, yes, but Jesus told us in the first movie that he can’t control the weather… it’s a result of living in a “fractured world”, i.e. fractured by the Fall of Man.

In any case, Jesus shows up and joins the other hostages but there’s something weird about this one because he seems so aloof in the face of repeated threats on his life. Bruno wonders if this man works for the drug distributor he gets his product from. “I don’t work for DeVille, and he doesn’t work for me,” Jesus explains. Ah, DeVille. The drug distributor is the police officer from the first movie, previously revealed to literally be the devil. So wait, the devil himself runs a heroin distribution system out of Thailand in the back room of an empty warehouse? You expect me to believe that the devil not only oversees the underworld, but also manages an international business operation on the side? Not a problem – the movie will ask its characters (and by extension its viewers) to accept even more absurd propositions as it progresses.

First things first, Jesus has to deal with Bruno’s Asian girlfriend Mimi, who needs saving the most because of her crippling heroin addiction. Haha, I’m just kidding–she needs saving the most because she was taught some dumb Eastern religion that doesn’t recognize the authority of Jesus. Instead, it teaches that pain isn’t real. Bah! “I’m Jesus,” Jesus says, “and I will never tell you that your pain is not real.” He then proceeds to use his magic powers to ease the pain Mimi’s feeling from heroin withdrawal. Is it any wonder that she’s convinced of his divinity after that? Additionally, Jesus tells Mimi that his religion is better than hers because “I won’t force you to suffer 1,000 lifetimes of war and sorrow and death.” I mean, unless you don’t love Jesus enough – then you’re condemned to an eternity of sorrow and pain, which will be all too real. Jesus even acknowledges this, to some extent, when he is asked whether drug-dealing Bruno could make it to Heaven. Jesus says that he can, but “sadly, if he doesn’t repent, I will be forced to judge him… but don’t think I take pleasure in it.” This is such a weird theology that the Encounter series is creating, with a God who can’t control the weather and who is apparently beholden to some power higher than himself which forces him to torture people. Creepy.

Chris, not going through heroin withdrawal, is less convinced by Jesus’ claims to love all humans. He is so torn up by his son’s death many years ago that he says “if I thought you were the real Jesus, I’d punch you in the face.” The fact that his son was taken at such a young age is not fair. Fair? FAIR? Jesus deadpans: “Is it fair I had to leave heavenly glory to bear punishment for your sins?” Ah, guilt tripping. Nice one, Jesus. Remind us again how this is a “gift”, because you’re not doing much to make it sound like not extortion. Chris, for his part, shoots back with a hard-hitting jab. If you don’t like the way we react to children’s deaths, stop killing them. Jesus is taken aback.

Okay, here’s your chance to get in on the action, folks. There are only a limited number of responses Jesus could produce for why bad things happen. I’ll give you the options below. See if you can guess which is the right answer in this round of “Why Are You Killing Our Children”:

Okay, pencils down. The answer that is used by Jesus to explain the death of Chris and Helen’s son is…. trick question, sorry. Jesus uses A, B, and C as justification. I think “testing your faith” isn’t as popular an explanation as it used to be, or perhaps it’s more of an Old Testament, trickster God concept. We already know that Jesus can’t control the weather, and he backs that up by blaming this “fractured world” for killing the Wards’ son, saying that when Man fell, the whole world fell. Uh… what? “I never let evil in,” Jesus asserts. Again, this just reinforces the Christian god’s impotence: he didn’t let evil in, but it got in anyway & he is powerless to stop it. Jesus uses the “God’s Plan” excuse for the death of Tim Ward because, allegedly, his death made Chris into a Christian. Um… no? He was just threatening to punch you in the face, Jesus. Are you deaf? Finally, Jesus uses “Free Will” as justification for the death, although how that relates to the destructive force of a tsunami is a little unclear to me now. Chris uses a line a lot of atheists use, actually: if I saw a woman being raped, I would try to stop it… yet Jesus does nothing. Jesus nods in understanding, saying that he cries when he watches women being raped constantly (since he’s everywhere, all the time), yet it’s incorrect to say that he does nothing to stop it. After all, he died on the cross! What else do you want from me!

You know, I’ve been down on Jesus and this whole “dying on the cross” thing for years, but it’s always been because of the fact that he never really died. If you come back to life three days later, or are an eternal deity as God allegedly is, calling Jesus’ crucifixion ‘death’ is a bit of a misnomer. Additionally, I’ve always seriously questioned the whole ‘gift’ aspect of the event, the ‘making up for your sins’, basically everything about it, really. It makes no sense whatsoever. But I’ve never really considered the act’s sufficiency before. What I mean is that I’ve questioned whether Jesus’ quote-unquote “dying” on the cross really does make up for your sins, given that every person alive today still had thousands of years to wait before they were born and the quote-unquote “gift” meant anything. But I don’t think I’ve ever thought about whether being crucified is good enough. I mean, when weighted against all the nastiness in the world, the suffering that other people have gone though – the Holocaust alone – the crucifixion of Jesus is akin to a scraped knee. Does it hurt for one guy? Sure. But is it in any way enough to make up for the millions of people who have been tortured and killed since then? In fact, how is killing some dude supposed to make me feel better about other people being killed, anyway? There’s no logic here, it’s mind-numbingly stupid.

The reason I bring all this up is that Jesus reveals that Mimi, as a child, was sold into sex slavery. My god, can you even imagine? This clearly overshadows all the middle-class annoyances that make other people mad at God in Christian movies (“Why did I break my hand as a child!”), yet it’s not really discussed at all. But it stuck with me. And I couldn’t help but think: Boo-hoo, Jesus, you think you got it bad because you had to pretend to die for a couple of days? Mimi’s entire life has been degradation, dehumanization, abuse, torture. And what, you were nailed to a cross? There were two other guys crucified with you! Human men, not gods! What you did wasn’t even extraordinary AT THE TIME. Yet you think you did something special that excuses you from using your magic powers to stop the continuing evil in this world? Christ, what an ego. Get over yourself.

Luckily, there is one character who is never convinced by Jesus’ chicanery. Interestingly, it’s the one person you might expect to be lapping it up like a dehydrated puppy. Yes, that’s right: Christian film star David A.R. White. He’s righteously angry at the injustice in the world and is not moved by Jesus’ self-aggrandizement. Jesus goes to new lows trying to convince Rick to sell his soul, telling him that even though his twin sister died of a heroin over-dose, she’s nevertheless in Heaven, “stand[ing] in the very presence of Father God himself.” Wait, isn’t everybody here standing in his very presence, since there’s only one God in the Christian religion? Or are you admitting this is a polytheistic religion? In any case, Jesus pulls this despicable “follow me or you’ll never see her again” line, effectively doing what Bruno had been doing all along, i.e. holding hostages. Jesus says that all Rick has to do to see his sister again is to accept my love.

There’s a long pause, while Jesus stares at Rick imploringly. Finally, Rick, like the bad-ass that he is, spits out: “Never.” He jumps up, spinning around and shooting guns left and right like a proper action hero. And he doesn’t return to Jesus at all! It’s glorious, and not just because he opts for a slow-mo fistfight in a fountain with one of the bad guys instead. Unfortunately, the film ends with Rick sitting alone on the beach, staring off into the distance. Jesus is talking to DeVille (the two are awfully buddy-buddy for not working together). Jesus, in a sinister tone, tells DeVille that Rick hasn’t necessarily joined the forces of Satan. “It’s not over yet,” he says, clearly suggesting the filmmakers’ desire to turn this mofo into a trilogy. I say bring it on! But you gotta promise me, in The Encounter 3: Rick’s Revenge (or whatever the title will be), please explain why Jesus only serves water in his roadside diner. It wasn’t addressed here, which I’m willing to forgive since there was a hostage situation and nobody really had time to ask, but the not knowing is killing me. It is imperative that this gets the full back-story it deserves.