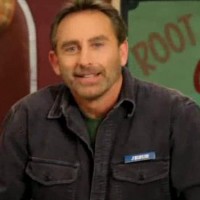 It’s a dark and stormy night. Five strangers have to turn back because the road’s out due to flooding, and consequently find themselves at the ominously named “Last Chance Diner”. They hurry in to get out of the rain, and are greeted by the creepy grin of the diner’s proprietor (Bruce Marchiano). Uh-oh. Middle of nowhere, a group of strangers meeting a man who seems to take a malicious glee in the group’s arrival? Seems like the set-up for a gruesome slasher flick. Alas, it’s not long before the man takes their orders and tells them he’s Jesus. That’s right: the Jesus, as in Jesus of Nazareth. Uh-oh. So this isn’t a horror movie, it’s a… Christian film. Well, better strap in. This is going to be a bumpy ride.

Granted, at first nobody believes the man running this dinky roadside diner is the real Jesus. It’s understandable, of course. I mean, think about it: Jesus isn’t supposed to return to Earth until the End Days, to judge everybody and destroy the world for good. So to find a short, middle-aged white guy offering you hamburgers and claiming to be the One True God… it stretches credulity. Actually, scratch that: Hank (Jamie Neito, Jerusalem Countdown) buys it almost immediately, all because Jesus says something that bolsters his faith. Jesus tells him: your wife still loves you. You see, Hank and his wife Catherine have a very visible rift between them, and Hank is so distraught over this that simply telling him “it’ll be okay” is enough for him to have complete and unwavering faith in the belief that this restauranteur is Jesus the Christ. Hank is an anomaly, clearly: so desperate for something hopeful to cling to that he’s willing to throw himself headlong into this stranger’s arms. Well, I guess it’s maybe not so strange – how many people have you heard argue that whether or not their god is real, it doesn’t matter because it’s enough that “it makes me feel better”?

As for everybody else, they’re a little harder to convince. Telling them information about their lives that a stranger could not possibly know helps to convince them, though. For example, Jesus knows Melissa is going to see her boyfriend in the mountains – and that he will propose to her! But slow down, Melissa… your boyfriend isn’t a Christian, which means that the relationship is doomed and you should dump him. Sorry. Yet even as the group demands information about their lives from the man in front of them, they still don’t quite buy his act. Nick (a.k.a. “Crusher” Cruschetti) in particular refuses to concede that this man is Jesus and should be worshiped. But Nick is kind of a special case, too, because he’s a committed atheist – the kind of atheist who is so committed to his lack of belief that he absolutely refuses to recognize Jesus even after he’s been given scads of evidence that this man just might be the real deal. The kind of atheist who has a perpetual sneer and devilish goatee. Well, he’s really more of a Satanist than an atheist, as evidenced by the fact that he happily accompanies a police officer named Officer DeVille (get it?) for a speed through the woods, throwing up Longhorns hand signals the whole time.

But before that, he indicates that the reason he hates Jesus is because, as a child, he was preparing to jump into a lake with his friends and tripped on a branch, falling into the water awkwardly and breaking his hand. This injury ruined his life: instead of being a major league football player, he was only… um.. still a major league football player. And then a multi-millionaire thanks to a fast food chain he owns, on top of that. Jesus, how could you! In any case, Nick’s whole thing is that if Jesus is the living embodiment of the Biblical god, all-good/all-powerful, etc., why did he allow him to trip on that branch? Jesus’ creepy smile gets wider. I made you trip on that branch because if you didn’t, you would have dove onto the rock that broke your hand and gotten killed. So you see, when I broke your hand, it was for your own good. Seems like if Jesus could move a branch to trip a kid and break his hand, he could just as easily… oh, I don’t know, move the rock? No?

Actually, maybe not. When Jesus first identifies himself, one of the group asks him the obvious question: can you stop the rainstorm so that we can get going, since you’re all-powerful? Apparently not. As Jesus explains, the rainstorm is here because “we live in a fractured world”. There would be no need for meteorologists if it weren’t for Original Sin. In bending over backward to explain God’s impotence, these movies only make things harder on themselves. If Jesus can’t stop the rain because of the world being “fractured”, that makes him less than completely powerful, doesn’t it? And if he really can stop the rain, but is just telling the group that he can’t so that they’ll stay, wouldn’t that make him a Liar (that is, as opposed to Lord or Lunatic)? Maybe the movie is okay with Jesus being a liar. After all, the ends justify the means, right? Homeless Kayla has the most to be upset with Jesus about – she’s been in and out of foster homes all her life, struggling to survive, with a mother who is a drug addict and a stepfather who is abusive. Jesus grins at her, telling her that these “tests” have made her stronger. It’s cool because it’s all part of God’s perfect plan. It’s not really clear why Nick’s biggest gripe is that he tripped over a branch as a child, while Kayla has to live in perpetual fear that her step-father is going to crush the bones in her skull in a fit of blind rage, but, whatever, God’s perfect plan – it’s a test, fractured world, free will, there’s some card we can play here.

As you might imagine, everybody leaves the diner a little bit better off because they’ve come to realize the depth of Jesus’ love. Except for Nick – he dies in a fiery car crash, because that’s what he deserves for rejecting the gift he’d been offered. It was an offer he couldn’t refuse, because refusal means Jesus will murder your ass. But the biggest question raised by The Encounter (directed by David A.R. White, by the way, the George Clooney of Christian cinema) is never answered. That question? Why can Jesus only serve water as a beverage at his restaurant? This is brought up several times in the movie, with Hank asking for a soda and Jesus looking him in the eye, saying, “I only serve water.” His wife immediately requests a lemonade or something, and Jesus, again, says, with deadly seriousness, “I only serve water.” This is the same guy who famously turned water into wine, so what’s up with not carrying any other beverages? He’ll make any food you want, but you can only drink water. Hopefully it’ll be explained in The Encounter 2: Paradise Lost.

In fact, I’m hoping that’s the entire premise of the movie: an elaborate explanation of this strange quirk. I’m going to be so mad if the sequel doesn’t clarify the reason Jesus doesn’t like any beverages except water. If Jesus doesn’t explain this, it will be absolutely unforgivable.