The Board Trailer [Official] from House of Grace Films on Vimeo. 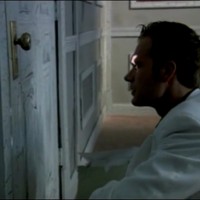 Despite being a short film, The Board had me taking notes furiously so that I would be able to write a comprehensive review. It’s amazing how much incredible content was packed into a mere thirty minutes. As the opening credits warn, the movie was “Inspired by a Sermon by Pastor Colin Smith”, so it should be no surprise that what follows is pure insanity.

We are introduced to the Board of Directors of an unnamed corporation–a corporation which, as it turns out, happens to be a person. Eat your heart out, ‘Citizens United‘. The Board has six members, whose names signify their role in this person’s body: Mr. Mind, Mr. Emotion, Mr. Memory, Mr. Heart, Mr. Will, and Mr. Conscience.  The group convenes and reviews last week’s minutes (a moral dilemma about getting out of golf and whether or not to be friendly to the attractive new secretary at work). One bit of old business is an ethical argument about the benefits of playing the lottery; it was ultimately decided that they would continue to play, and Mr. Will would have the authority to stop at any time. Meanwhile, Mr. Memory plays a video on his laptop showing a woman holding a huge check from last week’s winnings. Wait, are we millionaires?

It’s not really discussed in great detail because Mr. Mind has some new business he’d like to discuss: Ray at work keeps talking about Jesus Christ. The Board, understandably, utters a collective groan. Yet Mr. Mind argues that we should hear Ray out. First, Ray has asked whether we have ever lied. Mr. Conscience admits that we have, although usually for good reasons. Well, what does lying make us? A liar. Ray now asks: have we ever stolen? Mr. Memory searches his databases and realizes that the answer is yes – we stole pens from work, and the Coke machine once gave us an extra 15¢ that we kept. The horror! Finally, and most damningly, Ray asks whether we have ever lusted. We’re lusting after the new secretary right now, so that’s a yes. That’s 30% of God’s Commandments broken, the suspiciously pliable Mr. Mind says: “We’re a lying, thieving adulterer.” Just to keep things in perspective here, we deserve to writhe in Hellish eternal torment forever for the crime of telling white lies and taking a couple of nickels from a pop machine.

“Ray says the wages of sin is death,” Mr. Mind clucks. Oh, well, if Ray says it, then it must be true. Who is this Ray guy to you, Mr. Mind, and why are you fawning over his every word? In other words: if you love him so much, why don’t you marry him? Unfortunately, Mr. Conscience begins to see a light shining through the one door leading in and out of the boardroom. A light, do you get it? He sees the light. Oh, never mind, the symbolism is probably too subtle for you to understand.

With Mr. Mind drooling like an idiot, it’s left to Mr. Heart to be the voice of Reason. “Can’t you see? This is all trivial stuff.” Indeed, the things that Mr. Mind and Ray seem to be highlighting as reasons we’re not good enough to get into Heaven all do seem pretty trivial. Yet upon seeing the light behind the door, Mr. Conscience is totally convinced and begins speaking on behalf of Mr. Mind. To be honest, Conscience takes on a kind of sinister air, snarling and pushing Mr. Emotion into a corner or clenching his bony hand on Mr. Memory’s shoulder, ordering him to recount a traumatic childhood experience to break Mr. Heart’s defenses and force him to accept Jesus. Because emotionally manipulating someone into accepting Jesus out of misplaced guilt is not just cool, but encouraged.

Of course, Mr. Conscience doesn’t acknowledge what he’s doing, instead telling Mr. Mind that the reason he wanted to talk about this in the first place is because “you know Ray’s argument is logical.” Whether Mr. Mind believed that it was logical before, he certainly does now. Consequently, he contends that accepting Jesus isn’t the result of blind faith, but rather of reasonable faith. Fact: the Bible has never changed since it was written; 2,000-year old scrolls have been found that say the exact same thing our copy of the Bible says today. Oh, so it does say the world was created in six literal days and it’s not a quirk of translation that caused this obviously incorrect statement in an allegedly inerrant book? That’s cool. Hold on, Mr. Mind’s got an even more air-tight argument for you: why would people be willing to martyr themselves for a lie? The only logical explanation is that everything the Bible says about Jesus is 100% true. (Just don’t tell Mr. Mind about the suicide pilots responsible for the 9/11 attacks, because their willingness to die for their beliefs is going to seriously confuse him.) In fact, Mr. Mind takes this totally logical line of thought even further: (1) If people are willing to die for Christianity, it must be 100% true; (2) If it’s 100% true, then Jesus rose from the dead; (3) If Jesus rose from the dead, then he was God; (4) If Jesus is God, then he could perform miracles.

Never mind that the leap from “rising from the dead” to “being God” is insane, I’m more interested in why Mr. Mind thinks that the ultimate goal is to prove that Jesus performed miracles, not to prove that he is God. His being God is but a stepping stone on the path to awesome magic tricks.

For whatever reason, Mr. Memory is convinced. “Based on our history and the direction we’re headed, something needs to change!” he cries in hysterics. Yes, if we’re not careful, we might get to the point where we’ll decide to keep a whole quarter if we find one on the ground. Oh wow, I can’t believe I’d even think something so despicable. I deserve to have the skin peeled off my body and acid thrown on my exposed muscle forever just for thinking such a thought a single time. It’s called perfect justice.

Tell you what, I won’t give away everything. I won’t tell you whether Mr. Heart resigns his position and allows Jesus Christ to become the Chairman of the Board. What I would like to tell you is that I now have a strong urge to see director Brett Varvel’s moderately higher-budget sequel to The Board (entitled The War Within), but I’m afraid that might be considered lust? In which case, I deserve to die. Thank you, Jesus, for showing me that. You can become the majority stockholder in this corporation any day.