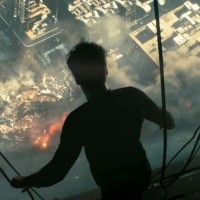 I think I liked J.J. Abrams’ latest foray into the first of two huge sci-fi series he’s been given control over, and I think that my like for it is fairly similar in intensity to the way that I felt about the debut of the series back in 2009. Let me reach four years into the past to quote myself, because I think it will serve as a good conversation starter toward discussing Star Trek Into Darkness. My feelings on the first film are best summarized in this passage:

Star Trek essentially serves as a jumping board, the first in a pretty obligatory series of films, intended mostly to introduce the viewer to this ragtag group of culturally diverse humanoids. No, Abrams’ intent here is not to probe the depths of human emotion or to make any grand, sweeping statements. No, the intent is instead to show his young actors being likeable and having space battles. The point is to be fun and not much else, and the film certainly accomplishes that.

Still, it’s difficult not to be disappointed by the fact that the movie plays out like cinematic cotton candy – sweet, but empty.

A significant burden was therefore placed on the first of those obligatory sequels, then. After a mild start, would the series embark on a truly stunning journey of cinematic exploration? Or would the movie fall into the well-worn rut of the summer blockbuster – chockablock with one-liners, mindless action sequences, an attempt at some last-minute pathos, maybe, but ultimately content to puff up the fluff so long as it gets people into theater seats? In short, though the first Star Trek might be able to get by on the rush of seeing familiar faces brought to life again on the big-screen, it would require more for this viewer to take the whole enterprise seriously.

Alas, Star Trek Into Darkness is more than happy to oblige shallowness if it looks cool. Yes, there’s vague notions about the bonds of friendship and the meaning of leadership, but they’re drawn in shades simultaneously broad and hazy; just enough to represent something of an emotional center. Then again, “center” isn’t really the right word: an emotional border. Which is to say that Kirk is reprimanded for not doing things by the books at the beginning of the film, a fact which leads him to question his command of the crew of the star-ship Enterprise at occasional moments to remind the viewer that this is a thing. Spock is chastised for not caring about things at the start of the film, and the movie allows him to acknowledge this supposed issue every so often. But they don’t feel essential to the film. In fact, it’s a wonder that the screenwriters (who are also to blame for the Transformers series and Prometheus) even bother with the pretense of emotional momentum at all. The Star Trek of the twenty-first century is about action sequences and hilaaaarious jokes, after all. Who cares about all this psychological nonsense when Dr. McCoy could be saying some variation of his, “I’m a doctor, not a ______” catchphrase?

There is a ton of that, by the way: catchphrases and one-liners. Why this insistence on being quote-unquote “funny”? I suppose I’m likely the lone hold-out here, given that the audience in the theater erupted into laughter each time Kirk hurled some sarcastic bon mot or Scotty spoke some silly line, but I see this as “Exhibit A” in the case for the worthlessness of this series. The lame attempts at humor in the 2009 film (e.g. Kirk’s hands becoming balloons) were among my biggest gripes with it, and nothing has been altered here. If anything, it’s been expanded to the point that every character gets to be funny. Listen to Spock and Uhura argue like children as they prepare to go on a dangerous mission! Hahahaha! And now they’re pulling Kirk into the argument! No. No, this isn’t funny. It isn’t cute. It’s all filler: D-grade sit-com crap that’s a short-hand substitute for real human interaction. It gets the idea of emotional interaction across without actually having to deal with anything messy like subtlety or thought.

And then it’s off to space battles. There’s a frenzied shoot-and-punch fight with Klingons that abruptly ends, lots of star-ships firing at one another (the Enterprise at one point has the back third of its body blown off, but it doesn’t seem to matter much), an idiotic bit about stabilizing the ship, and at one point Kirk ignores warnings about asteroids before flinging himself through propelled by jetpack. It’s all so big and loud and fast-paced to keep you entertained. I’m not saying that action sequences are inherently bad, but when they’re just an invented obstacle added simply to add tension where there is none in the primary plot, it’s ugly. I’m looking at you specifically, jetpack jumping scene. And maybe bad guys don’t necessarily need to have as much motivation as good guys do, but is “I’m evil” really enough to cut it? Once again, the movie limply waves toward deeper characterization by giving its villain(s?) a family, thus humanizing them negligibly… but ultimately, who cares about that when there’s people punching each other on top of speeding trains!!!

And a girl in her underwear, yes!!

So I come back to what I said at the start: that I think I liked J.J. Abrams’ latest. I know that statement seems suspect after the derision I’ve heaped upon it, but I stand by it. I liked the movie, but as a guilty pleasure because I know that it’s not made to challenge or engage its audience as anything more than mere spectacle. It’s on the screen and it’s bright and buzzing around and Benedict Cumberbatch is here to lend it some semblance of gravitas, and in the moment that’s enough. But though that was enough in 2009, when the series was just beginning, it’s not enough now. Star Trek Into Darkness confirms that even in a series ostensibly about exploration and human knowledge, inoffensive mediocrity trumps any attempt at artistry. Pandering to the many outweighs provoking the few.