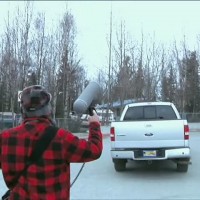 “I still feel that there’s a great Palin doc that has yet to be made.”

Those were words I wrote on the GTTM Twitter account on September 21, 2012. They were written after I re-read my own review for The Undefeated, a pro-Sarah Palin documentary. Though that film was clearly propaganda, it raised some interesting points which I believed might legitimately make the basis of a compelling documentary. For instance, did you know that at one point Palin held somewhere between an 80-90% approval rating in her home state of Alaska? Did you know there were times when she actually worked against Alaska Republicans? I was left feeling that perhaps we who had laughed Palin off the national stage for saying she could see Russia from her house (she never said that, by the way) missed something stronger underneath this veneer of cluelessness. I was left feeling that there was a riveting dramatic arc to Palin’s metaphorical Challenger mission. Perhaps a documentary that examined Palin’s legacy from a historical perspective without the attendant political baggage could shine a more humanistic light on the former Governor.

British journalist Nick Broomfield’s Sarah Palin: You Betcha! is not that documentary. You might have been able to surmise that just from the cheeky title, which none too subtly makes fun of Palin’s Yukon speech. Additionally, though Broomfield repeatedly assures Palin’s parents–both of whom surprisingly agreed to take part in this project–that he is not in Wasilla to film a hit job against Sarah, the movie slowly but surely becomes exactly that. Arguably, the film’s turn toward anti-Palin rage is the natural response one would have after really getting to know who Sarah Palin is, but Broomfield doesn’t shy away from digging in the Michael Moore bag of tricks to bolster his arguments for Palin’s viciousness. There are two images in particular that stuck out to me. In the first, an image of a smiling Palin cuts suddenly to that of the Wicked Witch of the West from The Wizard of Oz. The metaphor, if it can even be called that, is blunt and cheap – Sarah Palin is a witch, an evil witch! The second is a bit less in-your-face: we hear an audio recording of a radio show Palin did with two morning deejays who tear into a local townswoman, calling her “a cancer” on the town and worse, while insinuating that they’re merely saying what Palin, as a politician, cannot. Though there was clearly no video taken, we see a re-enactment on-screen, a close-up of a woman’s jawline in front of a microphone (ostensibly Palin’s), nodding at each of their jabs. Was Palin really nodding enthusiastically at these insults as Broomfield’s film suggests? Probably not. While even I don’t want to be seen as defending the former Vice-Presidential candidate, these tactics are crass and unnecessary.

Nevertheless, I was taken with Sarah Palin: You Betcha! I suppose one might argue that in spite of my desire to see a “fair and balanced” portrait of the subject, I subconsciously was rooting for the movie to tear her to shreds because of my political affiliation. Perhaps that’s true to some extent, that at the very least I more readily accepted the negative information Broomfield provides than I did the Palin propaganda (my own words) I’d previously seen. But I also think that Broomfield makes a more compelling argument–an argument which, keep in mind, states that Sarah Palin is nothing less than a monster. The documentarian accomplishes this by interviewing both enemies of the former Governor (all of whom argue that it is Palin who turned them into enemies) as well as former confidantes to the woman. Some are afraid to talk at all because of the Palin/Heath family’s seemingly limitless power. Those that do speak with the camera crew present all espouse a common theme: that Sarah Palin is small-minded, vengeful, and power-mad. She seems so sweet when she’s smiling warmly at admirers who come to her book signings, but behind closed doors she transforms into a werewolf or something.

I want to say that the truth probably falls somewhere in between The Undefeated and Sarah Palin: You Betcha!, if only to suggest some kind of journalistic objectivism. Because as we all know, the only way to be truly objective about a subject is to pretend that opposing points of view carry equal weight even when they don’t. In the case of Sarah Palin, the opposing views are not equally matched because of the damning words of the interviewees of Broomfield and his crew. For example, Palin’s mentor John Stein (former mayor of Wasilla) describes Sarah’s sudden announcement that she was running against him for mayor and the despicable suggestion that, because of his last name, Stein was Jewish (Palin was billed as Wasilla’s “first Christian mayor”). In a town comprised largely of evangelical Christian, of which Sarah is one–and according to at least one interviewee, a young-Earth creationist to boot–the suggestion that the opposing candidate was not Christian was a huge issue to overcome. Incidentally, although this was not touched on in the movie, reading about Stein online just now I’ve learned that the “validity of Stein’s marriage was publicly challenged by local activists Steve Stoll and Mark Chryson…his attempts to prove himself by producing a marriage certificate were berated. “They said, ‘Well, you could have forged that.'” The striking similarity of these under-handed tactics to those of Donald Trump with regard to President Obama’s birth certificate are hard to see as coincidental.

Interviews with other people Palin fired, including her campaign manager and many people who worked under her in the Alaska state government (often a result of a personal vendetta) have unpleasant words about the former Governor. A more sympathetic viewer might see these as bitter people lashing out at an innocent woman, but the trail of casualties (politically speaking) that Palin leaves behind wherever she goes is hard to dispute. The most remarkable interview, in my opinion, comes from senior McCain political strategist Steve Schmidt, instrumental in the selection of Palin as John McCain’s running mate in 2008. In Schmidt’s own words: “You have a person that I think is extraordinarily divisive. I believe she’s deeply dishonest…And the notion that that is the character of someone who aspires to the American Presidency, I find spine-chilling.” Ouch.

Ultimately, Sarah Palin: You Betcha! isn’t a particularly stunning cinematic experience. It lifts from Michael Moore’s playbook and it also utterly fails when it attempts to inject a sense of humor into the proceedings (Broomfield taking a bullhorn out at the end of a Palin speech is just sad). But despite its mediocre production, I still find myself with largely positive feelings about the movie simply because of the cutting appraisals of Palin’s character given here by some of the people who knew her best, or at least were closest to her. What would be a very bland picture is elevated somewhat by the surprising content of the interviews. Without those piercing revelations, there would be little value in the movie: it really would be nothing but a hit job.