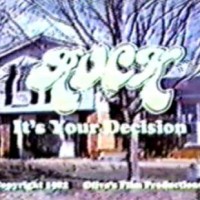 I watch a lot of Christian movies. When people are looking to get into the scene, I often warn them that one must wade through a lot of garbage to find the true gems, the movies that are so bad or so naive that they become spectacularly funny. By this standard, Rock: It’s Your Decision just may be the Citizen Kane of Christian cinema. Released in 1982, it’s an early example of the genre aimed squarely at an ultra-evangelical audience. As such, the movie is pure paranoia and propaganda, about the evils of rock’n’roll. “Sex, drugs, mocking God and the occult–aren’t these all prevalent in rock culture?” a youth pastor asks, earnestly. But worry not, parents. This movie is here to remind your children that Jesus doesn’t rock. Jesus would listen to the Golden Oldies, from back when music was real music and not just the noise that kids listen to these days!

To effect this change in children, i.e. making them stop listening to rock’n’roll, the movie relies on heaping doses of guilt. This begins with the FBI warning before the film, which has been amended to say in bold letters at the top: “Exodus 20:15 Thou Shalt Not Steal. If you are copying this tape you are breaking this Law.” Yow. Similarly, main character Jeff gets a good talking to from his youth pastor, who guilts the boy into giving up rock music for two weeks. Incidentally, the youth pastor promises not to throw Scripture at Jeff, but then almost immediately turns around and does just that. In any case, because Jeff is convinced that he’s taking part in some kind of science experiment and that he owes his parents somehow (Jeff’s mother: “He needs to learn what the Bible says about obedience.”), he agrees to the 2-week experiment and almost immediately becomes a brain-washed fundamentalist Christian.

No, I’m serious. His girlfriend and best friend both begin to get fed up because every time they hang out, Jeff now will not talk about anything other than his new-found hatred of rock’n’roll thanks to Jesus. They each worry about the fact that Jeff has become such a “fanatic”, and our boy Jeffrey now has to choose between the life that Jesus wants him to live, and the life that rock music will almost certainly lead him toward. A life of sex, drugs, and possibly homosexuality. Yes, Jeff argues that rock is bad because some rock stars are “admitted homosexuals”. The way that Jeff becomes so immediately immersed in this new evangelical lifestyle, at the expense of his relationships and sanity, is disturbing. And all the while, he’s prodded along by the youth pastor and his parents, telling him that it’s his choice whether to select his friends over Jesus, just as it’s everybody’s choice to accept the Bible or burn in Hell forever. I have never seen a movie quite so evangelical as this one; consequently, I’ve never seen a movie make Christianity look so much like a cult (and they’re totally oblivious to it, too!). “Dedication and surrender… they have much more to do with than just reading the Bible or going to church,” the youth pastor smiles, knowingly. DEDICATION AND SURRENDER. “These are some books about rock music based on a Christian perspective,” he continues.

What’s bizarre is that Jeff can’t see the way the church is putting its talons in him. During his fortnight free of rock music, he goes to a record store to do some “research”–namely, writing down the names of songs on popular albums which have sexual undertones. While there, a rock song begins playing over the speaker and Jeff begins nodding along to it, listening to the music. Afterward, he talks about the experience in an anxious tone, talking about how weird it felt, you know, “being controlled by the music”. Yes, getting caught up in a good song is SLAVERY. He further references the sights he’s seen at rock shows. Are people sitting quietly, their hands folded in their laps, listening intently to the family-friendly lyrics? No! They’re swaying, dancing, jumping around–in other words, they are being controlled by the music! AHHHHH! KILL YOUR RADIO KILL IT KILL IT BEFORE SATAN’S HAND REACHES OUT AND STRANGLES US TO DEATH!!!!

Toward the end of the movie, Jeff has now been so taken by evangelical Christianity that he’s preparing to give a speech to his congregation about the findings of his “research” on rock music. He calls out some of the usual suspects, of course. Kiss and AC/DC are obviously ruining the country. But don’t think you’re in the clear. “Rod Stewart? ‘Do You Think I’m Sexy?'” Jeff accuses, his tone incredulous. He goes on to say that he–I kid you not–can’t help but like rock music, then correct himself: “That is, my flesh does. The current part of me.” I am not joking. But Jeff has found that sex, drugs, and the occult are so prevalent in rock music that he has to avoid it. Just listen to the lyrics to one of Jeff’s favorite songs, “One of These Nights” by The Eagles:

The full moon is calling
The fever is high
And the wicked wind whispers and moans
You got your demons, you got desires
Well, I got a few of my own

Do you SEE what I mean? Disgusting! Filthy, filthy, dirty lyrics! It’s all about the occult with this “wicked wind” talk, and what’s this about “demons”? “Desires”? You know what he’s talking about, and it’s totally illicit and sinful! You should be ashamed of yourself for listening to this trash! You should feel guilty. You should apologize to your parents for the shame you’ve caused them, and you should be obedient. OBEY. At the end of his speech, Jeff pulls out a record and literally smashes it across the podium, the cracked pieces freeze-framed on the screen to really drive home the importance of the moment. Yes, Rock is your decision. But if you make the wrong decision, you might as well just leave this house right now and never come back because NO SON OF MINE is going to listen to any of that damn devil music, and I don’t care whether you say it has a “good, get-down beat”. Not while you’re living in my house, under my rules. And not even afterward, because you know what Jesus is watching you and people who listen to rock’n’roll will not inherit the Earth, they will fry in Hell with the other heathens and harlots is that what you want???

That’s what I thought.