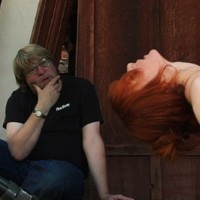 To be honest, your enjoyment of Popatopolis is likely to hinge less on whether you enjoy half-naked women than if you enjoy seeing behind the scenes of the movie business – and that’s “business” with a lower-case ‘b’, because the movie isn’t just about making a movie… it’s about the last vestiges of what many in the film view as an essential piece of American culture, the B-movie. With the advent of the internet and cheaper digital cameras, the low-budget feature has lost its appeal. Director Jim Wynorski began working in the golden age of B-movies, where he could make serious – albeit constrained – films; movies that had a bit of sexiness to them, sure, but which also had stories. He worked with Heather Locklear and Jennifer Love Hewitt, making cheesy sci-fi fare like Chopping Mall, Return of the Swamp Thing, and 976-Evil II. But low-budget flicks are a dime a dozen these days. The times have changed, and now the only place for B-movie directors, or for B-movie actors to apply their craft is in sleazy soft-core junk like the movie whose creation is chronicled here: The Witches of Breastwick.

Yes, gone are the days when serious actors – and actresses, in particular – could use a few B-movie roles as a platform for stardom. The actresses here, all selected by Wynorski for their unnatural bustiness, have no misconceptions about the short trajectory of their careers. And maybe it’s just the presence of the documentary crew, but they’re all eager to complain about the state of the business and it is fascinating. You might imagine that a movie which prominently features three topless women groping each other in a jacuzzi is populated with actors who are just in it for a paycheck, but through interviews we hear the actresses’ frustration with their roles. Julie K. Smith especially has a lot to say, having worked with Wynorski from the earliest days of his career. They used to have 90 days to complete a feature film, but over time it was reduced to 60, to 30, to 15, to 12, until now they’ve agreed to shoot a full-length movie in just three days. Because nobody cares about the movie, really, except the vague shape of a story and plenty of partial nudity. Smith complains that the days when a director would pull an actress aside and talk about the character’s motivations, the tone of the scene, the way that the moment should be played – they’re gone. Now it’s one take and done, move on as long as the words are right. Hell, Smith has to fight for the tiniest bit of depth to her character (wearing glasses while in disguise), and notes that she’ll have to argue for the change again in every scene where it makes sense for the character to be wearing the glasses… because this brave new world of sub-B movies has no place for a concept like continuity.

Much of the film is a character study of Wynorski himself, described by all as a great guy to be around when he’s off-set, but a beast behind the camera. He rages at his actors, and his seeming favorite phrase to throw out is “I hate it”. But it’s suggested that he, too, is merely expressing his frustration at where he is as a filmmaker. Legendary B-movie producer Roger Corman talks about Wynorski with a kind of reverence, citing his ability to match newly shot scenes with judiciously selected stock footage to make his movies look like blockbusters on a shoestring budget. Though they sometimes hate working with him, Wynorski’s friends and co-workers have to admit that he loves film and he loves being a filmmaker; even as the new requirement of emphasizing sleaze may be disappointing to him, Wynorski seems to enjoy working with the constraints of a limited budget and likely would not be able to dedicate an extended period of time to a single project. There are too many ideas, too many things he wants to do, that quick and easy movies are where his allegiance will continually lie.

So I guess I’ve shown my hand here: I found a lot of the movie incredibly depressing. And that’s intentional, I think, because the film ends with title cards indicating that nearly every person who worked on The Witches of Breastwick retired from filmmaking shortly afterward. And then we’re treated to a montage of scenes from Wynorski’s filmography – all of them certainly campy, but when it gets to his most recent work (especially a scene from The Bare Wench Project, a soft-core parody of The Blair Witch Project), it becomes embarrassing. The movie seems shot with a home video camera at a roadside motel. Not that anybody would ever say Wynorski was on top, but still, the contrast between his earlier work and this later output is striking. Yet between the doom and gloom, there’s humor at work in Popatopolis as well. One of the actresses working on the project, much to the consternation of Julie K. Smith, is an actual porn star (B-movies, as they turned into soft-core, increasingly utilized actual porn stars because hey, nude scenes are their forté). This actress, Stormy Daniels, expresses a mixture of awe, shock, and excitement at being cast in her first “mainstream film”. When she takes part in a simulated sex scene (as all sex in soft-core movies is simulated) against a tree in the woods, she freaks out at first that the actor uses the sock he was wearing on his foot to cover himself, then later shows the camera large scratches on her arms, commenting: “That was the roughest non-sex I’ve ever had.”

So yes, Popatopolis is an intriguing character study of eccentric director Jim Wynorski and is sometimes quite funny (during the credits, a crew-member says that on past movies he’s worked on with Wynorski, they’ve extended their run-time by slowing down the credits… immediately, the credits of Popatopolis lose speed). But more than anything, it’s kind of a sad portrait of a dying art form. Whether it’s one that is as integral to the American identity as those involved in the documentary would like the audience to believe, well, that can be debated; but it’s undeniable that it’s mostly people who are going through the motions because what they are doing was, at one time, something that they loved to do.  For people working on a movie with a two-man film crew, next to no budget, to be shot in just three days, the despairing words of Norma Desmond in Sunset Boulevard must ring all too true: the pictures have indeed gotten small.