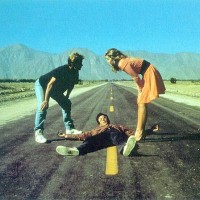 For some time now, I’ve been telling people that I’ve seen every Nicolas Cage film. It’s difficult for me to admit that until now, that assertion wasn’t entirely accurate. For you see, until now I had never seen Never on Tuesday, the 1989 debut feature from director Adam Rifkin (The Chase, Detroit Rock City). To be fair to myself, Cage doesn’t even get a credit in the film – that’s how slight his appearance in the film is – with the movie not recognizing him by name and IMDb relegating him to the status of ‘Man in Red Sports Car’. In truth, though his cameo lasts less than 60 seconds, the young Cage is at his most bizarre in the role. Wearing a prosthetic nose for no particular reason and affecting an alternately exasperated and maniacal air, his portrayal of ‘Man in Red Sports Car’ leaves me wishing there had been a feature-length film about this character alone. Unfortunately, this is almost the entirety of my praise for Never on Tuesday.

A low-budget comedy, the film takes place almost entirely in the middle of the desert after friends Matt (Andrew Lauer) and Eddie (Peter Berg) begin rough-housing during their trip to California and crash into the car of the ethereal Tuesday (Claudia Christian), totaling both vehicles. Matt and Eddie were going to the west coast in order to soak up the sun and score with as many nymphomaniacal California girls they could get their hands on, but they’re not too distressed about their lousy fortune given that Tuesday has long legs and blonde hair and will suffice for the time being. The remainder of the film has the threesome talking and playing games by the side of the road, their frivolity occasionally being interrupted by another uncredited cameo – a very young Charlie Sheen and Gilbert Gottfried both show up to provide a few chuckles. Also, the action cuts away every so often to romantic/sexual fantasies that the guys are having about Tuesday. The most uncomfortable of these fantasies has Tuesday straddling Matt in a feather-bed in the middle of the desert, he groping her bare breasts while a half dozen seven-year old girls in tutus dance around them in a circle. I can’t imagine the pride of the parents who got to see their daughters in that scene.

Matt and Eddie’s plan to take turns having sex with the woman they’d collided with on a desert highway is complicated by the fact that Tuesday turns out to be a lesbian. While Matt is generally able to accept this, Eddie is convinced that the girl is simply confused about her sexuality and needs a man to “convert” her. His attempts at conversion are limited to goofy smiles. The three play catch with a football, tell ghost stories, have a picnic, and just have a lot of fun slowly dying of hunger and thirst on the side of the road in the middle of nowhere while the merciless sun beats down on them constantly. While the ghost stories are being told, we witness zombies rising from the desert and walking toward the group of friends – they disappear when the story is over. When Sheen shows up later as a ruthless thief, the scene turns “comic” while he takes an inventory of each of the items the group has in their respective cars, indicating which records he would like to steal and which to leave behind. I assume these touches are meant to be vaguely surreal, the sort of wacky circumstances that could only come to fruition during an ’80s road trip. Yet none of it is funny, or interesting, or particularly inspired. With the exception of Cage, the cameos leave no impression at all and feel less like a hilarious chain of events than a plodding series of distractions. The fantasy sequences, meant to be elaborate visions to contrast the mostly mundane environment the three have found themselves stranded within, also accomplish little more than providing some partial nudity. In fact, I can’t tell what their purpose is otherwise except to reinforce that the boys are attracted to Tuesday.

By the time the movie began nearing its conclusion, I found myself thinking that nothing had happened. It’s not a case of it being slow, or reserved, or contained or some other high-minded justification for limited forward momentum. Instead, there’s just no growth between the characters at all despite how the movie wants to sell itself as being about their interactions as personal conflict being overcome. At the start of the movie, the dialogue goes around in circles about whether the cars can be fixed; at the end, their goodbyes to one another are similarly protracted. It almost feels like buying time, trying to fill out a movie that has little to say. It’s also, as mentioned before, a first-time outing with a limited budget – perhaps that context may help to explain away the weak-kneed student-film vibe the movie projects, the yawn-worthy “comedy”, the laughable insinuation made by Matt that this movie shares any similarities to The Breakfast Club. Even so, the movie is a chore to get through (and to write about, for that matter).

For Nicolas Cage completists, Never on Tuesday is essential viewing because the man gives a stellar albeit much too brief performance. Once he exits the movie, however, you’d be forgiven for doing the same.