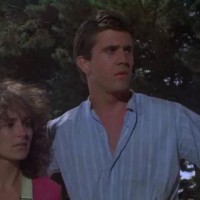 I guess I’d just heard about Mad Max and its sequels, to a vague extent, and that had me expecting something different from this late ’70s low-budget action-thriller from Australia. I imagined hulking, armored cars; I imagined total lawlessness and speeding shoot-outs. Mostly, I expected that Max would be mad from the get-go. Later installments will probably prove those expectations right, but in the beginning, “Mad” Max goes on an idyllic vacation with his wife and child. Is this the right movie?

Of course, the more cynical among you might see this as a shallow attempt to give the character some motivation for when he later embraces “Mad”-ness. If we see how happy and seemingly perfect his home life is, the pain is easier to sympathize with later when that happiness is inevitably stripped from him. It’s a reason for the good cop to go rogue, to take-the-law-into-his-own-hands, as they say. But then again, how does that work in a world on the brink of utter chaos? How does that work in a world where the police already engage in high-speed pursuits with the criminally insane (referred to as “terminal psychos”) while attempting to stop them with a well-timed shotgun blast? The law is barely hanging on by a thread already, so what is it really that Max is taking into his own hands?

I submit that he’s doing no such thing. The critical line, for me, is when our man Max (Mel Gibson) tells his boss that he’s quitting the police force. Even though he was introduced at the start of the movie as a de facto hero – the camera tracing its way up his leather boots, viewing his determined glare in the rearview mirror, etc. to prove his inherent badassery – Max has been shaken to his core following a particularly gruesome interaction with a biker gang that’s out to get him for exploding their leader in a construction zone car crash. You’d think it’d be just another day for Max, and… well, that’s just the problem. “Look, any longer out on the road,” he says sternly, “and I’m one of them.” The chaos and ruthlessness of the business has gotten to him; he’s smart enough to be aware of it, and he doesn’t want to end up like his father – distant and cold. So he takes a vacation.

I didn’t expect to see Mad Max playfully splashing about in a lake or lying blissfully on its shore, whispering sweet nothings into the ear of his beloved. Heck, I didn’t expect Mad Max to have a beloved. But that’s the problem, isn’t it? At this point in the film, despite the title, this is not “Mad” Max. If anything, it’s concerned Max and somewhat relieved Max, glad Max to be free Max from the stressed Max he was as police officer Max. He’s gone from his introduction as the perpetually cool action star to just a regular guy. He’s traded his leather jacket for a sensible periwinkle striped button-up. But alas, that levity is short-lived. Before long, the biker gang which was still on a rabid tear – unbeknownst to our man in blue – catches up to the family and starts wreaking havoc. What else is a biker gang to do – especially one populated by terminal psychos who refuse to get a decent job? So havoc is wreaked, right on schedule, and here is where it starts to get interesting: Max is becoming mad. What does that mean? Well, in the short term it means that he’s committed himself to a single-minded goal of destroying every member of the biker gang who wronged him. Naturally. That’s a given. But the thing is that as his vengeance progresses, it begins to feel a little less like justice and a little more like sadism. He’s, in effect, becoming “one of them”. When he chains a young man only nominally connected to the previously mentioned havoc to a wrecked automobile, then gives the guy the Saw-like choice of burning to death or mutilating himself, it’s hard to view as eye-for-an-eye justice being doled out. Instead, it feels like Max has totally embraced his dark side; the black leather is back, but now it feels less like the outfit of an Arthur Fonzarelli meets Clint Eastwood type – instead, it feels like the dark garb of the grim reaper himself.

And then, spoiler alert, this is where the movie ends. I couldn’t help but be impressed by that, because it felt like the movie had taken the narrative arc the audience expects and shaken it up. Instead of the normal guy who rises to the call of duty and becomes a hero, or alternately becomes a vigilante, or instead of the hero who is tested and then reaffirms his heroism, Max’s story is peculiar. He starts out as the hero, then is downgraded to regular guy, and ultimately finds comfort in… well, not outright villainy, but a hard emotionlessness. Imagine if Luke Skywalker began Star Wars as a Jedi Knight, then decided he wanted to be a moisture farmer, and ultimately cut off Darth Vader’s extremities one at a time. That’s the sort of bizarre story-line that Max is given in Mad Max. And then, it ends! It just stops, right after we really get to the full promise of the film’s title. What now, for Max? He certainly can’t go back to his home life after this, so what kind of a person is he now? The movie leaves the viewer hanging, and that is beautiful.

I know there are sequels, of course, and as I mentioned earlier my suspicion is that they conform better to the expectations I’d had in my head. Max no doubt becomes a vigilante, doling out violent justice to criminals across the Australian outback. But I haven’t seen those movies, and I’d really like this to stand on its own. I’d like to keep the options open for Max. It doesn’t seem like simply providing retribution to the biker gang is enough for him now, but it’s impossible to tell what lies in his future. The film ends on an ambiguous note, leaving the viewer unsure of who Max has become now or how we should feel about it. In some ways, the film matches the beats of the action genre with cool car chases/crashes and masculine posturing from the protagonist and antagonists; in others, it subverts the traditional narrative by burning the hero down and reshaping him into something foreign and unknowable.

Then there’s the argument that I’m really putting way too much effort into analyzing the psychological evolution of a character in what is essentially an adrenaline-fueled action flick. Maybe so, but I find that looking for human concerns in fantastic worlds is often incredibly rewarding. I wouldn’t have gotten nearly as much out of the Predator series, for instance, if I hadn’t been constantly thinking about the nature of the aliens’ culture. If anything, I think I’m more justified in focusing on Max’s shifting personality than in trying to understand what the Predator’s seeming understanding of English means about the race as a whole; it seems Mad Max DOES want the viewer to consider these thoughts about Max’s transformation into full-on “Mad”-ness, although perhaps not as unwaveringly as I have. In any case, whether Mad Max is just a rollicking adventure or whether it’s a dark slice-of-life with no clear answers, altogether the movie is a great watch.

One Response to “Mad Max”