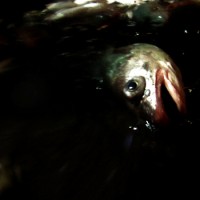 I wasn’t impressed by director Lucien Castaing-Taylor’s 2009 documentary Sweetgrass, which does little more than follow shepherds around as they drive a huge herd of sheep through forests, across rivers and plains. That film used a lot of steady shots, and since it didn’t have any narration there was a lot of silence – just the sound of bleating sheep and crunching leaves, for the most part. In some ways, Castaing-Taylor’s 2013 follow-up Leviathan is very similar. Instead of shepherds, the film chronicles a few days in the life of deep sea fishermen. Once again, there is no narration and so the movie is again a very dispassionate look into this lifestyle. Then what is it that made Leviathan such a remarkable, engrossing experience?

There’s a number of factors working in tandem to create a truly singular film. First, there’s the setting: a grimy, swaying fishing boat. The work is done in the early morning hours, so most of the film is shot in near-darkness, spotlights from the boat providing the only illumination. Huge mechanical contraptions line the sides of the deck. Then, there’s the camerawork. Instead of long, stable shots, the camera seems as though it can go anywhere. At one point, we seem to be viewing things from the perspective of one of the fishermen, then we’re on the deck, at eye-level with fish gasping their last breaths; next, we’re on the side of the vessel, watching gallons of blood and leftover fish parts washing back into the ocean. Or we’re in the sky, looking down on a flock of seagulls before diving beneath the waves. That sense of limitlessness is exhilarating. It absolutely earns the comparisons I’ve read to Gaspar Noe (okay, I’ll admit: that’s a lot of what interested me in seeing Leviathan to begin with), and it may even be more groundbreaking because it’s brought that impressive, freewheeling style to non-fiction.

But perhaps just as striking as the camerawork is the sound design, an aspect that lends mightily to the menacing air of the film. With the machinery, we hear the screeching turn of gears, the metallic clang of moving parts. We hear the clink-clink-clink-clink as chains are pulled out of the ocean, the flop of fishy flesh on the deck. In the distance, the swarm of gulls cry, their white feathers shimmering like diamonds out of the darkness. There’s the hum of the ship’s motor, and when the camera dips below the waves we hear the muffled sound of liquid churning. There are fishermen on the boat, and they yell orders to one another but their voices, too, are just out-of-focus like slightly more comprehensible versions of the adults in Charlie Brown’s life. And then there’s the sickening rrriiiipp! as manta ray wings are torn from their bodies, the gross schniik! as fish heads are shorn from bodies with a quick machete slice.

Really, though, it’s the combination of all these disparate elements that gives the film its eerie atmosphere. Because of the odd angles, the darkness, the spray of water on the camera distorting our view; because of the violent creaking sounds and unintelligible yelling across the ship; because of the movie’s refusal to fully inform its viewers where, exactly, we are at any given moment or what, exactly, is happening, the pieces unify into a viscerally immersive whole. It’s so easy to get lost in the action, despite not understanding it, and to feel chills in your spine as the wordless slaughter unfolds. One of the most incredible moments has the camera at about waist-level next to a fisherman. He stands over a huge wooden crate, disemboweling sea creatures and throwing the unusable portions into a different container. The camera explores, in the dim light, the gooey, red blood dripping from the edges of the box and staining the wood.

Yet the act isn’t presented as some kind of genocide (a la The Cove), even as it is disturbingly graphic in content. There is no quote-unquote “point of view” that the film is trying to sell; this is not a message movie. That’s one of the wonderful things about the film, to be frank. A person I follow on Twitter shares documentary recommendations and I often see people writing to him asking, “Can you suggest a documentary on [subject]?” It never fails to irk me. I came to documentaries on the wings of Errol Morris, which may explain some of my disdain for those who equate the genre with educational films. Don’t get me wrong: documentaries can certainly be educational, but as with any other film their objective first and foremost should be to entertain. Message documentaries, along with documentaries which try to show the “sides” of an issue to “inform” viewers are among the weakest, blandest examples of the genre. The best documentaries explore a subject for the sake of exploring it, to find an unusual approach to the subject matter, and use their format just as any fictional film might–with intriguing mechanics and a gripping narrative. Leviathan is an excellent film to show anybody who would try to constrain the genre by PBS or Michael Moore-esque standards.

Stated plainly, it’s an exciting work of art. It draws its viewer in with an almost hallucinogenic atmosphere that captures a totally foreign world in unbelievable detail. Admittedly, there are moments where the camera settles on a single image and loses steam. Often this occurs when the humans are around; one scene that comes to mind is a shot that settles on the topless mermaid tattoo of a man shucking oysters. But don’t be misled: there are a great number of scenes with humans that are as powerful as anything in the film. Just watch the crew all light cigarettes in the darkness, then heave laundry baskets full of seafood to one another–it’s beautiful.

That’s the movie as a whole, as a matter of fact. Absolutely gorgeous, totally inventive, utterly gripping, and uncommonly affecting. Scenes from the movie have been playing out in my mind for days now. Leviathan is a stunning work of art.