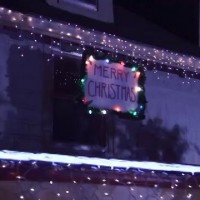 A heart-warming tale of patriotism and faith, Last Ounce of Courage tells the story of Bob Revere, a pharmacist and part-time small-town mayor, who upon hearing his grandson’s questions about why his father died in war, decides to dedicate his life to ridding his town of religious freedom. That’s not the way the movie would like its viewers to understand Bob’s actions, however. He even yells the line “I fight for freedom!” three times on a rooftop to really drive the point home that – contrary to what it seems – Bob is supposed to be the good guy. It helps that his opponent is Warren Hammerschmidt, an attorney for… uh… the ACLU? Americans United? In any case, Hammerschmidt is entirely sinister: he grins deviously while smoking cigars, he stomps on Christmas decorations with his shiny black shoes, he gets the Health Department to shut down a Christian mission for celebrating Christmas. Because that’s totally something that would happen. Nevertheless, with Bob as the only alternative to Hammerschmidt’s scheming, we have no choice but to accept him as hero.

And why wouldn’t we? Bob seems justified in deciding to turn his town into a self-styled “Christmas City” in response to what he declares are people “trying to pass laws to get rid of Christmas altogether.” Get rid of Christmas altogether! There’s a particularly moving scene where Bob’s grandson Christian and his friends find Christmas decorations in the attic and decide that they will – get this – decorate their house with them! The horror! It’s portrayed as some kind of courageous act, as though the police are liable to come and imprison everybody for such a brazen personal display of holiday cheer. Then again, it’s hard to say what the rules are in the alternate reality of Last Ounce of Courage. I’m sure many will mistake the film’s world for our own, but there are plenty of suggestions that something’s amiss, as when Hammerschmidt demands that the police arrest a group of people who spontaneously break out in Christmas carols – in our world, that’s not a criminal offense. As another example, look at the school play which is the story of Jesus’ birth but thinly disguised with aliens and labelled a “Winter Space Odyssey” to avoid the wrath of the powerful anti-Christian lobby up on capitol hill… because in this bizarro world, that’s apparently a thing. Or, most hilariously, take the scene where Christian and his friend Maddie are hauled into the principal’s office on the first day of school and their parents called in to deal with them, all because a B-B-B-bible was found inside Christian’s locker! Hiss! Throw them to the lions! Of course, here in the real world, politicians are more than happy to shove their religion down the throats of public school students, and so are teachers. Being harangued for having a Bible at school is the kind of Christian persecution fantasy only possible in the heavily fictionalized world of movies like Last Ounce of Courage.

In any case, Bob has had enough. As he puts together his master plan, he tells fellow employees at City Hall that they have gone and re-named the annual Christmas parade – it’s now the ‘Holiday Parade’. “Seventy-five years of tradition, gone!” he cries out. And do you know that some schools are replacing Christmas break with “winter break”? As you can see, Bob is totally right: by preventing state-sponsored parades and education from specifically favoring his religion, they’re taking away his freedoms! Bob vows to fight. His freedoms are being taken away one by one, and he’s not going to stand for it anymore. If he wants to place a 30-foot Christmas tree on the courthouse lawn, then by golly he’s going to do it. What’s that? You think that forcing the state to sponsor one religion over others is a clear violation of the First Amendment? Bob’s got a couple of responses to that one, so take your pick:

(1) I am not infringing on anybody’s religious beliefs. If Muslims or Jews want to pray, they can do that and I respect their right to do so… as long as my religion specifically gets to put up decorations all over town and so long as my religion specifically is the basis of the public school play.
(2) “If restoring a holiday the majority of citizens enjoy, but a few sore heads don’t makes me insensitive, then I’d say that pretty much describes me.”

So there you have it, folks, Bob is insensitive and fully aware of it. He describes those with different views than him as “a few sore heads”. Seriously, don’t get bent out of shape just because I’m going to put the 10 Commandments on the government buildings and pictures of Jesus around town in my capacity as your leader… it’s not like I don’t respect your beliefs, so long as you pray silently while I have a whole parade dedicated to Jesus, funded by the state! Anything less is because of those fat-cat atheists in Washington trying to take away my religious freedom! If anybody has a problem with these specifically Christian decorations, they can simply “take a chill pill”. That’s a suggestion seriously offered in the movie.

But it’s not so much a suggestion as it is a rallying cry. Hammerschmidt’s organization “represents Anti-American causes” because in this world, religious totalitarianism is what the stars and stripes truly stand for. And that’s what Bob Revere stands for as well – in his most audacious act, he climbs to the top of that Christian mission and installs a cross! That’ll show ’em! He warns the cheering crowd below (insert shot of man wiping a tear of gratitude from his eye amidst applause) that “we can’t let the enemy take one more inch”… the enemy here being, um, anybody who isn’t a Christian. Go find your own melting pot if you want to put up some damn Muslim decorations, amirite fellas?

What’s most amazing to me, however, is a scene in the subplot wherein Christian and Maddie decide they’re going to get their friends to sabotage the school play, rip off their alien costumes, and tell the story of Jesus’ birth for real – not just through an extremely simplistic reinterpretation. Maddie has named their mission OPERATION CHRISTMAS, but none of the other kids at their strategy session are very satisfied with that moniker. They offer alternative suggestions such as “Operation Super Sabotage”, each child with his or her own idea of what the scheme truly is. In the end, Maddie wins the day by simply yelling louder than her peers: “NO. IT’S OPERATION CHRISTMAS.” The whole film is summed up in that single scene, yet the filmmakers seem oblivious and play it for laughs instead. Bob, like Maddie, is totally unconcerned with the feelings of others – he has decided that as mayor, he will make things turn out the way he wants them, and anything less, anything that acknowledges that there are people who do not believe in his religion or appreciate it being thrust upon them, this is an affront to American values. And now here’s Jesus as a gray-haired old white guy to nod in approval at Bob’s selfish actions.

Again, the scary thing is that many will mistake the alternate reality of the movie with our own. In fact, I’m certain there are scores of people who already believe the things Bob does without even having seen this movie. In that way, Last Ounce of Courage is kind of sinister – it suggests that America’s multiculturalism is inherently evil, that everybody is an enemy. It does it by pretending to be a sweet family film; in reality, it’s vicious propaganda. Did I expect something more? I don’t know why I would have, but I’m disappointed by the movie’s senseless xenophobia nonetheless.