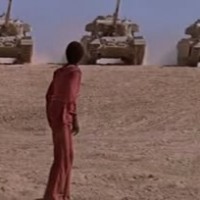 I tend to gravitate toward low-budget Christian cinema for entertainment. This summer, it’s been practically all I’ve been watching. Though I love me some Christian movies, I’m afraid that sometimes people get the wrong impression about what I mean by that. For example, I’ve never watched arguably the most popular Christian movie of this generation: Mel Gibson’s The Passion of the Christ. I’m sure I’ll see it some day, but it’s not something I’m chomping at the bit to see because I know it’s probably not very funny. Similarly, I only saw The Last Temptation of Christ as part of a philosophy class in college – even though it’s directed by Martin Scorsese, I probably would not have sought it out on my own. I just don’t find Jesus all that interesting unless he’s appeared in a diner in present day to have lazy theological arguments with straw men. So I likely would never have seen Jesus Christ Superstar were it not for the fact that it was recommended to me by a reader.

I’m glad to have seen it. Not that Jesus Christ Superstar is particularly good, but it’s definitely a work of art first and a religious movie second. Because the film is based off of a musical meant for the stage, every line is sung. Additionally, a small group of ruins stands in for an entire city… much like a single background might represent many different locales in the world of theater. These elements give the movie a distinctive flavor. One’s enjoyment of the gimmick may wax and wane as the film progresses, but the fact remains throughout that it’s certain of its vision. Is it wrong to call “being a musical” a gimmick? Maybe, but this isn’t just any musical. The words of Jesus, et al., are filtered through late ’60s-early ’70s acid rock, an effect that’s especially effective when songs are sung by Judas (Carl Anderson). Judas, perhaps uncoincidentally, is the real star of the show for much of the film. This is another way in which the movie defies expectations, to a degree.

Now, I’m not intimately familiar with the Jesus story, but it has always been my understanding that Judas is meant to be an evil character. He’s the bad guy, right? At the start of Jesus Christ Superstar, he seems to be the only sensible person around. He stands off to the side of the scene, bemoaning that Jesus has let his popularity get to his head. It seems to Judas that people are more interested in the man than in his words, and that’s distressing. I get it. Jesus is perfectly content to lounge around all day letting Mary Magdalene rub oil on his feet. When Judas interjects, arguing that that oil is expensive and shouldn’t be wasted, both Mary and Jesus get all up in his face, essentially telling him not to worry about it. Jesus, in fact, says something that seems remarkably out of character: “Surely you’re not saying we have the resources to save the poor from their lot. There will be poor always, pathetically struggling. Look at the good things you’ve got.” This isn’t the it’s-easier-for-a-camel moralizing Jesus, a realization that makes Judas’ consternation all too understandable.

Maybe it’s more appropriate to call it the film’s attempt at humanizing Jesus, but there were several moments that surprised me for how bratty this alleged perfect, selfless man-god turned out to be. At one point, he’s beset by a mob of leperous wretches, all clamoring for Jesus’ touch to cure them their ailments. As far as I could tell, even among those he touched, no miraculous resurrection was forthcoming. Eventually, he screams, “There’s too many of you! Get away from me!” Come to think of it, this is but one of many times when Jesus has a temper tantrum and yells at people to get away from him. Even when he supposedly knows the future and understands Judas’ role in his awful fate, he treats his friend terribly. Finally, there’s a scene where all of Jesus’ disciples have fallen asleep and the insomniac Son of God petulantly complains, “Well, I guess nobody wants to stay awake with me.” Not a direct quote. He then climbs a mountain, seeking answers from God about why he has to be killed. Among the questions he asks is, “If I die, what will be my reward?” Did Jesus die expecting a prize for it? This would explain his later lamentation, “My god, why have you forsaken me?”

The repeated suggestions of Jesus’ mortality are intriguing. Later, when confronted by King Herod and asked to perform a single miracle (e.g. walking across water), Jesus is at a loss. Reading about this from an apologetics site now, it’s suggested that Jesus’ silence is intentional, the better to force prophecies into coming true. It’s not surprising that apologetics would read this as a tactical move on Jesus’ part rather than lack of ability; nevertheless, that’s how the scene read to me while watching it.

In the falling action, Jesus is treated with far more reverence. Judas inexplicably sells Jesus out for the infamous thirty pieces of silver, although here he’s only persuaded to take the silver by being told that he could donate it to his favorite charity. Here’s lookin’ at you, Ronald McDonald House. But Judas’ turn toward betrayal does feel like a mandatory fulfilling of prophecy, as does Jesus’ crucifixion. When it happens, it’s almost totally unclear why he’s being killed – both for Pontius Pilate ( Barry Dennen, strongly reminiscent of Hans Conried), who repeatedly tells Jesus that he has no reason to kill him, and for Jesus himself, who seems to treat the act as obligatory rather than practical. When a gathering of Jews call for his crucifixion, I was left baffled by how things turned around so quickly for a man who moments earlier was commanding huge crowds of choreographed fans. I know I was hard on the snotty Jesus of the first half of the movie for not living up to the pure idealization of the character I’ve held in my mind, but I much prefer the sometimes unlikeable superstar Jesus to the sad shell of a man-god who just seems to be going through the motions. Come to think of it, while I appreciate the touch of humanity in the characterization of both Jesus and Judas, there was never any feeling that Jesus was charismatic enough, or had compelling enough ideas for Judas–or any of the disciples, really–to center their lives around this man. So there’s a lot, unfortunately, that’s just a case of going through the motions of the already well-trod story.

The musical numbers add life to it, though many have almost no rhythm, making them hard to sing along with. But it’s in the best of them that the promise of Jesus Christ Superstar comes through, and it’s in the shocking seriousness that the movie at first treats its characters’ motivations. It doesn’t all come together, unfortunately, but the effort is appreciated.