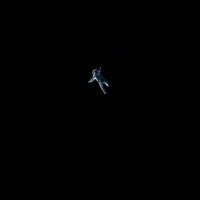 I was looking forward to Alfonso Cuarón’s Gravity for months, after being very impressed with his previous film (Children of Men, which I grew to appreciate more upon re-watching to the point that I awarded it a full five stars). A friend also interested in seeing the director’s latest asked me to say nothing more than a star rating after I watched it opening night. When I exited the theater, my response was, “I’m torn between 3 1/2 or 4.”

There are a number of reasons I wanted to start with that anecdote, not least of which is because of the fact that I am watching Speed Racer with a friend later today, a movie that I mostly dismissed on its release with a 3 1/2-star rating. At the time, I wrote, “It is what it is.” Yet again, the benefit of re-watching the movie was to increase my awareness of its strengths. It’s now among my favorite films and one I will continue to champion. Not that I felt ambivalent toward Gravity on finally seeing it–to the contrary, I knew immediately that it was in some ways extraordinary–but I was concerned with what I felt was a weakness in the narrative, the human story. I felt, at the time, that despite following Dr. Ryan Stone (Sandra Bullock) throughout the entirety of the movie and even knowing a little bit of her back-story, I never really connected with the character in the way that I should have. This weighed heavily on my mind at the time. I have yet to re-watch Gravity (I wonder if I’ll come to regret not seeing it in the theater more than once), but the weight I’ve assigned to this misstep has lessened.

After he had seen the movie, I spent some time talking with my friend about my increasing reverence for it. I had begun to discount the limp narrative in favor of the experience of the movie. This is one reason I would like to see the movie again, to determine whether that experiential factor remains. I’ve long been a vocal supporter of the use of 3-D in movies, because I feel that when used right it can make a movie far more immersive (using it right means no swordfish flying toward the audience, see Amityville 3-D for reference). At the very least, use swordfish sparingly. The technique should be used to build atmosphere, to add depth of field to create a you-are-there sensation beyond what a flat screen can provide. There have been a number of recent movies that have proven the worthiness of this vision – Life of Pi, Avatar, Cave of Forgotten Dreams, and The Croods come to mind – even as detractors gleefully prognosticate that 3-D is on its way out. Perhaps it’s just on its way to being used in a limited and appropriate way.

In any case, the use of 3-D in Gravity indeed pulls a viewer in. Almost the entirety of the movie takes place in space, and more precisely, in zero-gravity. The actors fly and spin and their characters could easily float off into the black abyss if they lose their grip on the satellite they’re working on. There’s an immediate tension already because no matter how safe the characters are, it’s hard to divorce from your mind the idea that their tethers could sever, leaving them stranded in the inky darkness. It’s the same feeling you get watching somebody stand on the very edge of a tall building, a sinking feeling in your stomach that the slightest error could send them plummeting. The 3-D makes the characters’ existence in open space seem more real, pushes the glowing Earth into the background in a way that I’m not sure 2-D could accomplish. By the time the movie ended, I myself felt as though I could barely walk from having been suspended in zero-gravity for such a long period of time. That’s an incredible sensation.

I worried, however, that I was willing to forgive Gravity because of the experience of the movie in a way that I wasn’t able to do for others. Yet, the more I think about it, that’s entirely inaccurate. My tastes seem to center on three cinematic goals, in this order: (1) Inventiveness – I haven’t stopped talking about Gaspar Noe since I first saw the paradigm-shattering Irreversible, the fluid and dream-like visuals of The Cell continue to amaze me, and I was blown away by the self-referential nature of Rubber; (2) Realistic Human Interaction – Say Anything makes me ache every time I watch it, Rocky has an incredible sense of the relationship between its characters, and I was smitten with the natural tics of the characters in Friends With Kids; (3) Artistic Design – Atonement is amazing for how meticulously crafted it is (even as it could just as easily fit into either of the prior two categories), Moonrise Kingdom has a remarkable vision even in its simplest shots, and Life of Pi is stunningly gorgeous. I’m sure there are other factors that affect my interest in a movie (the inclusion of Nicolas Cage, perhaps?), but I’ve kind of concluded that those are the big three.

Responding to Gravity for its inventiveness in providing a uniquely hypnotic experience isn’t a cheat. It’s simply recognizing the movie’s strength. Further, like many of the movies used as examples above, it could easily fit into multiple categories. The film is brimming with beautifully staged images. The one I’ve chosen to use for a thumbnail has Stone tumbling into the darkness, just a tiny flashing white speck on the frame before finally being tugged back to safety – it’s incredible. Another moment that sticks out in my mind is when she caves to emotion, a stream of tears crystallizing on her face and floating into the foreground (a more conventional use of the 3-D technology, yet still hugely effective). Lastly, there’s the way the camera pans up on Stone’s face from below after one particular success near the end of the movie, making her visage fill the frame after so long being a little piece within it.

And it’s not just the overall feeling that the movie produces which makes it so phenomenal – it’s in the emotion carried within each scene, too. Take, as an example, a gripping moment where the air-lock door of the ship Stone is in appears to come open. Or, even more brutal, when she is outside of the vessel trying to unmoor it from a tangled parachute as a speeding shower of debris begins to hammer the metal (another great, if somewhat more conventional, use of 3-D). The tension is thick in the air throughout the vast majority of the film, and it’s okay that that is more important to the movie than trying to flesh out Stone’s stock motivations or freshening its somewhat transparent symbolism/thematic material.

Gravity‘s emphasis is on form over content, which is initially disappointing, but it succeeds so wildly at what it was attempting that it’s easy to look past any apparent mistakes. Alfonso Cuarón knocked it out of the park again with this one. I can’t wait to see where he takes us next.

One Response to “Gravity”