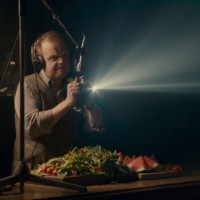 I’m not exactly an expert on the sub-genre of film known as giallo, so I assume you aren’t either. According to the Wikipedia article on the subject, it’s particularly used to describe Italian made films, and more specifically still, ones that include elements of the thriller genre, the horror genre, eroticism, and stylish camerawork. This is the type of film that Gilderoy (Toby Jones) has flown to Italy to do sound design for, and by extension it’s the sort of film that Berberian Sound Studio becomes… although having been made by an Englishman, it doesn’t really fit the bill. This is a point of irritation for Noel Murray, who writes for The Dissolve; he feels that the term giallo should be able to encompass films of a type in the same way that the word noir has come to signify a mood, a tone, more than an actual genre. And he writes that in response to a viewing of Berberian Sound Studio, actually. I find myself whole-heartedly agreeing, but perhaps in a different way than was intended. Because it’s not just that this movie evokes a tone that is peculiar to a sub-genre that ought to have a more expansive definition. Instead, this movie is nothing but its tone.

Yes, there’s something of a plot. I keep seeing it described as the story of the timid Gilderoy’s being driven mad by his work on the extremely graphic film for which he’s been hired to create sound effects. That’s certainly part of it, and I got a “Hotel California” vibe from it as well – something reinforced by Gilderoy’s inability to get reimbursement for his airfare to Italy, the way his apartment looks suspiciously similar to the studio, the way the work seems to be a never-ending loop of the same tasks, and (most directly) the way that he’s accused by the film’s director of trying to “escape”. But in the end–and you may consider this a spoiler, I guess–there’s not really a concrete conclusion. The film they’re working on isn’t necessarily complete, Gilderoy doesn’t necessarily get to go home or come to some grand epiphany about his work or discover who the killer is. Not to say there is a killer, mind you; I just mean that the film is a lot more loosely grounded than one would expect.

Incidentally, these ideas are kind of similar to those that fans of Shane Carruth’s Upstream Color have tried to get across, although I was not impressed by that film. Oh, what the hell – I’ll quote from The Dissolve again: “The film is best navigated intuitively, like a poem…” Berberian Sound Studio is a poem in its own right, but in a far more cinematic way. It starts with the premise: the main character works with sound. So sound becomes important, and things that a viewer might not pay attention to otherwise come to the forefront: the clicking of heels on a tiled floor, the soft buzz of a telephone its hook, the hiss of a tape recorder before voices interrupt the semi-silence. These things don’t mean anything, per se; they’re not something worth noting because you’ll have to remember them in order to piece together a puzzle later. It’s less puzzle than painting, and these small things (brought to our attention by the mere fact that we know we are watching a movie about a sound studio) aren’t the people recognizable within the picture– they’re the brushstrokes.

Lest you think it’s limited to aural artistry, be aware there’s a great wealth of lovingly photographed images on display as well. Extreme close-ups of hands turning dials or winding tape, silent tracking shots over piles of vegetables (both fresh and spoiled), the blinking red light in the darkness which reads “Silenzio“, and the numerous clean transitions between scenes and locations. A moment that stood out to me in particular had Gilderoy standing in the woods in the dark, illuminated by only a candle. One of the actresses from the film he’s working on appears and moves into the light. It’s a moody, unsettling moment and at first it’s unclear whether this is a dream sequence; a wider shot shows that they’re actually still in the studio, the leaves Gilderoy is standing on are there solely for the purposes of recreating noises for the film. Or as another example, the many times we’ll close in on him pressing a button on a recorder playing creepy sounds at his kitchen table, then pull out again to reveal that he’s not back in the studio.

These things draw attention to themselves, certainly. But I believe that’s kind of the point. Despite the graphic nature of the film Gilderoy is working on, none of it is shown to we the viewers save for the opening credits. In fact, the opening credits for the movie proper are spare and silent, whereas those of the film-within-the-film are splashed with bright red, images tearing themselves in two, religious iconography that suggests something sinister. And that’s what the whole movie is about, really. We don’t see the movie they’re making, but the sound of radishes being torn apart approximates the sound of hair being ripped out by its roots. Smashed watermelons imply a body falling from a great height. And the darkness and the attenuating the audience to focus on sounds, and the surreal turn the film takes toward the final act all work to sell an uneasy tone.

And in some ways, I think that works– provided that you’re willing to be satisfied that the movie to go this far and no further. Through carefully selected imagery and expressive sound design, Berberian Sound Studio creates a specific atmosphere that I feel is extraordinary if taken as the movie’s true goal. It’s in trying to nail down what the movie’s plot is about that I feel the film fails. The circular nature of the “work” at hand, the volatile relationship between Gilderoy and his co-workers, and especially the absurd “randomness” that takes over as the film nears its finish, all of it feels like miscalculation. The ethereal quality of the movie’s poetics is not well served by trying to fit it into a rhyming pattern, so to speak. Even if the finale is unconventional itself, it still tries to shape the “plot” of the film far more than it ought to have. Berberian Sound Studio is at its best when it isn’t worrying about what its characters are saying, but instead focuses the sound of their voice as they speak.