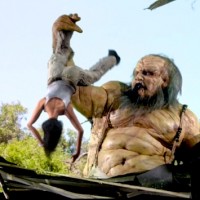 I watch a lot of religious films, so I was excited to see a movie from the largely unrecognized sect that follows the only true deity, Paul Bunyan. Unfortunately,  Axe Giant is less a sincere look at the religious faith of Bunyanites than it is anti-Bunyan propaganda. It reminds me strongly of the film that sparked outrage in the Muslim population abroad, ultimately leading to the Benghazi terror attacks. Yes, the movie might well have been titled Innocence of Bunyan.

The film begins in 1894, with a group of lumberjacks who are cutting down all the trees in the forest. The boss goes off to powder his nose and when he returns, he finds that the rest of his crew has been savagely murdered – their entrails and bright red blood litter the snowy area. As it turns out, the carnage was the result of Paul Bunyan’s wrath. We see Bunyan in this scene, a fact which maybe should have tipped me off as to the true nature of the film. In most Christian films where Jesus plays a role, his identity is often withheld for a big reveal. Not so here, and in fact the image of Bunyan is something kind of monstrous – his face is horribly disfigured and scarred, and he growls and grunts like some feral beast. This is a horrible, heretical caricature of the giant; absolutely no better than those Muhammad cartoons or “Piss Christ“. How such an offensive film found distribution is beyond me.

In any case, the movie flashes forward to present day, where four teenagers are being carted from prison to a cabin in the woods. As part of a first-time offenders program, they are being given the opportunity to hike off their sentences instead of serving time in a jail cell. While watching Axe Giant, I am ashamed to admit I hadn’t yet realized the fact that the movie is false propaganda to rile hatred against Bunyanites (really no different than ‘The Protocols of the Elders of Zion‘). I assumed that these four were soon to find their faith in Paul Bunyan strengthened and the over-educated counselor who accompanied them to the woods shamed for being college-educated. In religious films, admitting to having a master’s degree is like admitting you’re working for the devil. Yet things turn sour quickly when, while on a hike through the woods, one of the teens takes the horn from the skeleton of some kind of cow.

As we’re soon informed, the skull is actually that of Babe, the legendary blue ox. Eliminating Babe’s well-documented immortality is blasphemous enough, but the reason his skeleton is all that remains is because the lumberjacks from the beginning of the movie shot him in the face, then cooked and ate his carcass. The entire sequence is shown in graphic detail, the lumberjacks laughing derisively as they tear strips of flesh from the cooked body of Babe. It’s gratuitous, honestly, and as far as I can tell only included in order to upset Bunyanites – why else would the camera need to linger over such obscene images? It’s like when that Hindu was served a beef burrito instead of a bean burrito at Taco Bell… only here, instead of a burrito it’s an entire motion picture’s worth of desecration. I mean, seriously, who made this movie? The Westboro Baptist Church?

The sacrilege doesn’t stop at Babe the Blue Ox, either. Joe Estevez shows up as the one true believer in the truth of Paul Bunyan, but he’s painted as a crazy person – a religious zealot, wild-eyed and with unkempt gray hair. The characters immediately distrust him, and in fact suggest he doesn’t bathe, i.e. that he is “unclean”. The parody doesn’t stop there; the character is shown having no reaction to people being killed around him, in order to suggest heartlessness; he yells unintelligibly and plays a game of chess with no opponent; he entraps the teens and prevents them from leaving the woods. I’m surprised they didn’t have him turn into a werewolf or drink the blood of Christian children, for all the despicable anti-Bunyanism the movie spouts. At one point, Estevez’s character gives the viewer an oral history of Paul Bunyan; it goes without saying that his statements are heavily slanted and flatly contradict the religious texts that mainstream Bunyanites rely on. Once again, the description is no doubt meant only to ridicule believers and to add fuel to the fire for viewers already predisposed to religious intolerance.

Estevez says that Paul Bunyan did not form the Grand Canyon by dragging his ax through the ground, or create the Great Lakes with his footsteps. Instead, he declares that Bunyan was born of a human woman, yet cursed with a disease that makes the giant grow taller than other men and live far longer. Further, he adds with no sense of impropriety that Bunyan has the mind of a child. I mean, don’t get me wrong, I’m an avowed atheist – Paul Bunyan is a myth made up by people trying to find answers in a pre-scientific era and it’s definitely important that we help Bunyanites begin to live in the real world by showing them the irrationality of their beliefs. But there’s a tactful way to do that, and calling their savior mentally challenged is just unnecessary. This is how the whole “angry atheist” perception gets started… I’m not saying that you should respect the belief in Paul Bunyan just because it’s a religious belief, but showing believers as raving lunatics and calling Bunyan a child is just cruel. You’re not going to win any converts that way.

But I suppose the movie isn’t about winning converts, but instead about preaching to those who are already receptive to the message. It’s a film geared toward those who already possess anti-Bunyanite sympathies, and the final moments where an amateur militia (thanks, Second Amendment!) corner Bunyan and riddle him with bullets is the icing on the cake. Bunyan shrieks in pain and terror, and we watch blood burst forth from each additional gunshot wound he sustains, until the giant falls from the bridge he’s standing on and into the river below. The militia men and women cheer. And once again, I just can’t help thinking: what if a bunch of gun enthusiasts just mowed down Jesus, like just filled him with bullet holes while he groaned in agony with his IQ of 32? How would people react? Would that movie be given the budget for D-grade CGI special effects and be allowed to play on the SyFy channel? No, of course not! It would be condemned by Christian groups before it even began filming! So why is it socially acceptable, in this day and age, to continue vilifying Bunyanites without any repercussions?

Religious liberty applies to everyone. Whether or not Paul Bunyan is real, it’s disturbing that people are making movies like this, which do nothing but demonize a less revered religious faith, and are not getting called out on it. If we allow this to happen to Bunyanites, where does it stop? Obviously the filmmakers have the right to free speech, but that doesn’t meant that they have the right not to be criticized. It is our duty to speak up – if we don’t, then writer/director Gary Jones may make a movie trying to make people hate us next.