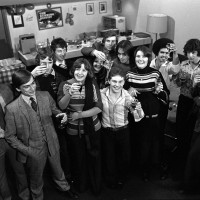 In 1964, a short documentary was created for British television called 7 Up. I wonder at the time if the creators fully realized the scope of what they had begun. The theme that the film hammered on at its denouement was a Jesuit saying: “Give me a child until he is seven, and I will give you the man.” The suggestion here is that the children at age seven have, in some ways, given viewers clues into the way that the group would turn out once they became fully-formed adults. But of course, how could viewers know that without seeing the group as adults? To that end, the cameras returned to give British viewers (and eventually audiences world-wide) a glimpse into the lives of these children every seven years. We saw them at age fourteen, 21, 28, and so on. They are now 56 years old.

I’ve already given the 7 Up series, as a whole, a five-star rating because there is nothing in cinema that can compare. Each film is hugely philosophical, planting questions in the viewers’ minds about whether the children have turned out as expected, what their parentage or class or demeanor did to affect where they’ve found themselves at later stages in life. And as they grew up and became far more self-aware, the influence that the series itself has had on their lives becomes a major topic of conversation. Imagine if you were forced to re-live sometimes painful moments from your past every seven years, to be viewed on the world’s stage; imagine if every person who watched your brief participation in the documentary thought they understood who you are entirely, and perhaps cast you as a “bad guy” because of the honest answers you gave. How would that experience affect you? The majority of the participants see their role in the series as something of a curse, albeit one they feel some responsibility to continue (the only person who has entirely divorced himself from the series is Charles, ironically a documentarian himself). Nick describes this curse as “sort of Biblical – seven days of filming every seven years.” One phrase that I’ve heard said more than a few times throughout the series regarding multiple items of conversation is this: “You can’t really understand it unless you’ve gone through it.” Most recently, this thought has been applied to the almost half-a-century of introspection with which the group has been pummeled. It’s no wonder this continues to be a major theme that emerged as the series progressed.

But really, what you get out of the series is whatever you want to get out of it. Director Michael Apted asks probing questions, sometimes aggressive questions designed to get an emotional response – such as when he asked the homeless Neil at age 28, “Do you feel you’re going mad?”; or when he suggests to the sometimes insular Tony at age 56 that he comes across as racist – and that allows the film to cast the “characters” in a certain light, to suggest a narrative through-line to these people, to suggest that they can be reduced to certain elemental traits. But then, this might change completely by the next movie. Observe, as an example, the incredible transformation of Suzy, whose formative years were spent as a sullen brat, but who has aged into a cheerful, thoughtful, loving mother of three. Who could have guessed? The way their lives are presented do not define them, though it’s clear that many who watch the series are inclined to think that way. I’m no less guilty of it, I’ll admit… I’ve been prone to refer to John as “the asshole” in short-hand because of the way he defends his upper-class upbringing as unquestionably good, but in 56 Up, for maybe the first time, he seizes the opportunity to show a softer side of himself and comes across as far more likeable than previously imagined.

It’s all about context, really. Don’t understand what I mean? Take Andrew, as an example – he was grouped with John and Charles in the beginnings of the series as one of “the rich kids”, and there’s no denying that that is exactly what they were. Hell, they talked about checking the price of stock that they owned at age seven while their less fortunate peers could sometimes barely form a coherent sentence. As they’ve aged, they’ve largely maintained that same station in life, yet being “rich” alone does not make one a bad person. Andrew married young and they’ve been shown to have a happy relationship throughout the years. He bought a barn and has spent his life fixing it and the surrounding land up until it has become a gorgeous home for his family. Andrew has been positioned as a “nice guy” throughout the series, while John has been positioned as sort of an antagonist. Their lives really aren’t dramatically different, so why the opposing presentation of who they are? Part of it is clearly Apted’s decisions on how to show each of the participants (i.e. intentionally drawing distinctions, as when he moves from the effervescent Sue to the anxious Paul in 56 Up), a combination of a cuttingly honest portrayal of the participants’ unthinking tells (e.g. body language, word choice, dress, etc.) with their carefully chosen phrasing (e.g. 56 Up has the return of Peter, keenly aware of the negative attention he received when he last opened himself up to the cameras and careful not to repeat history), and finally viewers’ own expectations and biases.

I’ve often felt that Nick was the one child of the bunch who truly understood what the series was attempting. John and Andrew view the films as a treatise on the iniquity between the classes in British society, and in the past it’s been suggested that Jackie and Lynn feel the same way; others admit they don’t see the utility or believe it to be merely entertainment, a kind of extended “reality television” for the masses to consume feverishly. Perhaps that’s true to some extent, that the series is to a large degree entertainment, but Nick seems to hit the nail on the head when he sums up the series: “It’s how a person, any person, how they change. It’s not an absolute accurate picture of me, but it’s a picture of somebody.” It’s a picture of everybody involved – the children who were selected in 1964, the director who has led the discussion every seven years, the audience who has been witnessing the growth of these people and adding their own experiences to flesh out who they believe these children have become.

It’s an amazing, singular experience to watch 56 Up – in fact, this just may be the best entry in the series to date. Whether it’s a product of this simply being the most recent in the series or the affection for each of the participants that shines through this entry, it almost feels as though this would work as a cap to the series, letting the children enjoy the rest of their lives in peace. It’s a warm, funny, sometimes extremely moving piece of cinema. It’s another segment in a vast masterpiece. Whether the series continues from here or not, 56 Up is an extraordinary work.