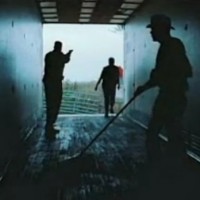 Though the film’s subject matter may sound provocative, Zoo has little to say. A documentary made with artistic re-enactments, the film tells the story of a man who went by the code name “Mr. Hands”. He died from internal bleeding after suffering injuries from having sexual relations with a horse, a fact which lit up the blogosphere and the media went mad with delight. CNN doesn’t send helicopters to catch video of the friends and family of every victim of accidental death, but when it’s at the hands of something as tabloid-headline-ready as equine bestiality, everybody wants a chance to hear all the lascivious details and express their outrage.

But when I say the movie tells the story of “Mr. Hands”, that’s not exactly true. It tiptoes around the specifics of the case so much that it’s impossible to tell exactly what happened that fateful night. In fact, that majority of the film does not relate to this specific incident at all, but instead tries to humanize the group of men who met regularly to hang out, drink, play cards, and sometimes screw horses. They’re self-admitted zoophiliacs, men who are sexually attracted to animals, though they prefer to be called by the much cuter sounding term “zoos”. The film fairly romanticizes their sexual appetites, painting the men as intellectuals and good samaritans who would never take advantage of their four-legged friends – they describe the relationship they share with the horses by eliciting imagery of the convergence of technology and nature, by appealing to our pity: “We just love our animals a little more than other people do.”

As a whole, the 70-minute film is elegantly composed. Each shot is a beauty to behold, even when it’s something as simple as three semi trucks parked in a line at a gas station, so that the viewer is easily drawn into the stylized vision of these men that the movie seems to be attempting to sell. But at the end of the day, they’re having sex with horses. No matter how many voice-overs we hear insisting that they love the animals and treat them better than a human being sometimes, that fact remains. The film wants to cover this topic without ever seriously addressing it, allowing its zoophiliac subjects to speak in vague and florid ways to describe their saintly passion for the beasts, lightly skipping by the mention of a plaster-cast horse penis owned by the deceased (What, that? It was a Valentine’s Day gift!) and the highly disturbing image of a Shetland pony racing up to begin performing fellatio on one of the horses. These intricacies hint at a far more repulsive truth about their practices than these men suggest.

But then, I’m just one of those anthropocentric fools who can’t open his mind to the rich diversity of life out there waiting to be sexed up. Perhaps the film could have done a better job of explaining their position. Toward the end of the film, the ex-wife of Mr. Hands indicates in voice-over that she’s been doing research about this strange fetish and is getting closer now to understanding the thought processes behind it than she ever has before. Meanwhile, we the audience are left out in the cold. We are treated only to self-aggrandizing justifications for the behavior, colored by beautiful shots in shadows, dawn sunrise, or moonlight. One of the subjects (described by a woman as looking like a “child molester type”, of course), wonders how people considered him a good man the day before the new leaked about the group’s activities, but his friends suddenly turned on him the day afterward. We are intended to empathize with this philosophical musing, but it seems such a spectacularly dumb question. Your friends were unaware of your clandestine activities previously, and for better or worse have strong moral opposition to the act. But baby, you thought I was a good man until you found out I was cheating on you!

Is the majority’s moral stance against bestiality justified? The knee-jerk reaction is to declare hell yes it is – after all, animals do not have the capacity for mental cognition in the same way as humans do and therefore cannot be fully consensual participants in sexual intercourse. Then again, have we expected animals to be fully consensual participants when we lock them in pens, slaughter them for food, breed them, hunt them, or perform laboratory experiments on them? If not in those situations, then why the sudden outcry about withholding the animal’s autonomy when it comes to sexual relations? Could it be that the knee-jerk reaction is just that, a reflex from conditioning, an antiquated judgment made not from fact but from fear of that which is out of the ordinary?

These are all intriguing questions, but they’re culled directly from Wikipedia. The movie itself doesn’t address these concepts, and by doing so (or not doing so, I should say) leaves itself feeling strangely hollow. If it weren’t for its uber-artistic direction, there would be little left to salvage the film. It gets no closer to understanding the zoophilia movement or humanizing its participants by the time the credits roll. Instead, the few zoos profiled seem as shady and untrustworthy as you might imagine beforehand, and the central death that spurs the rest of the story lacks all weight. “I do miss him,” one of the men says, but the question is: why? The movie doesn’t explain who Mr. Hands was. It doesn’t explain who any of the men are. This is not a documentary about men, but about their sexual predilections. And it’s not even so much about that as just a superficial run-through of their thoughts about themselves.

The trailer for Zoo proudly displays a quote from Variety comparing the picture to the work of Werner Herzog or Errol Morris. There’s no comparison. Where those filmmakers listen to the subjects and find deeper meaning than what a cursory glance would suggest, this movie is nothing but cursory glances. It takes a taboo subject and stays hushed about it, revealing nothing about its subjects. If it weren’t for the often inspiring imagery, there would be nothing to like in this film whatsoever.