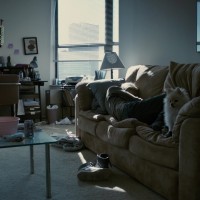 If you go into Young Adult expecting a rehash of director Jason Reitman and screenwriter Diablo Cody’s previous joint effort, Juno, prepare to be disappointed. Gone are the hamburger phones of yesteryear, no more cutesy slang or adorable pop songs sung by a teenager with an adult sensibility. In fact, this time around the pendulum seems to have swung in the exact opposite direction. Oh sure, we still get adorable pop songs, but this time they’re screeched out by a new-mom jam band. Instead of a teenager with wisdom beyond her years, we have instead an adult, stuck in her teenage years, and prodded by more demons that just her burgeoning alcoholism.

Mavis Gary (Charlize Theron) is an anti-hero. She’s our protagonist, but she revels in her dishevelment. She wakes up day after day splayed out face-down on her bed, clothes still on and bedspread untouched, a hangover in full effect. When an accidental email indicates that her high school boyfriend has just had a baby with his lovely wife, Mavis drops everything to drive back to her hometown in an effort to woo him back. That’s right: she plans to woo a married man with a newborn baby. It’s not that she’s evil, just unlikeable. She’s unlikeable because she’s utterly self-obsessed, a trait which may have become enhanced as a coping mechanism for dealing with her fragmenting life. Unhappily single 20 years after high school, her semi-celebrity status as the ghostwriter of a popular young adult (!) book series is coming to an abrupt halt due to waning sales. Her spur-of-the-moment trip down south is done in an effort to prove that she’s still better than everyone that was left behind.

For instance, there’s Matt Freehauf (Patton Oswalt), a former classmate disfigured in a vicious beating brought on by mistaken identity. The two spend a lot of time together when Mavis returns home, primarily because he has a distillery in his garage where he makes home-made whiskey. The two have a great chemistry together, but a romance is not to be. While Mavis belittles Matt for his geekiness and for his disability, he points out her obvious shortcomings as well: her plan is demented, she is delusional. That doesn’t stop her from trying to ingratiate herself with her former flame at every opportunity she gets – and she gets an obscene number of opportunities. But it’s not just the unlikelihood of it all that keeps the film at arm’s length, not just the way that Mavis treats Matt. Instead, it’s difficult to get really close to the story or to the characters because the movie refuses to play like a movie. Whatever character arc Mavis has is extremely short. I don’t know how to describe it without spoiler-ing it for you if you haven’t seen the film (reviews are always best read just after having seen the movie, anyway), so let me just come right out and say it: the slap in the face that gets Mavis to abandon her plans is not related to her realizing the inherent insanity, but instead by being reminded that she is more important than any of their individual petty squabbles.

This concept is likely to turn many viewers away from Young Adult. It’s a movie that shows childish, selfish behavior from an adult woman and refuses to comment on it. When she explodes in swear words at a party, the other attendees stand in shocked silence but nobody calls her out for her behavior. It’s the story of a woman who is awful, and continues being awful. There are hints that bruises from the past are infringing on her present, and the ever-present specter of possible alcoholism hangs over her choices like a raincloud, but she seems coherent enough to be able to maintain some semblance of self-awareness… and yet she can’t. I myself had mixed feelings at film’s end, but the more I think about it, the more I appreciate this tack. It’s a gutsy play, to give your protagonist virtually no redeeming qualities.

The movie’s center can probably best be seen in a particularly stirring moment when Mavis and Matt stumble into the woods behind their former high school, sipping whiskey out of a flask. An argument ensues, for one reason or another, and Mavis accuses Matt – her one friend in this town – of failing to achieve the highs that he might have, because he allows the disability that causes him to have to walk with a crutch to serve as a metaphorical crutch, an excuse not to do more. Matt tearfully recounts the vicious attack that left him so scarred, throwing back the lame-brained poetic license Mavis took in her analogy. It’s not what one might expect: the two don’t acknowledge each other’s shortcomings in themselves and resolve to move forward with a more positive outlook on life. Mavis mutters “whatever” and stomps away, leaving Matt in the darkened woods alone.

When the two meet up again later in the film, they have sex – this, in spite of the way that Mavis had treated Matt prior. It’s made to appear as a vulnerable, honest moment for the two. We as viewers want it to be that, we’ve been waiting for them to see their compatability from the start. Yet Mavis wakes up much as she does with any of her one-night stands: confused by what had happened and slightly disgusted. Once again, this doesn’t jive with the romantic comedy formula we’re kind of expecting. Sex is supposed to be meaningful! To see the act reduced to a desperate relief from other annoyances degrades the moment.

Which is the point. I’d like to see Young Adult again, maybe I’d be better able to get a grasp on its characters now that I feel like I have a better idea of what it was trying to accomplish. It still may not get its ideas across as effectively as it could have, and the humor only really hits on occasion, but I think the conceit – a heroine racked with unrelenting self-centeredness – is an intriguing premise. Plus, it’s the first time I’ve considered the notion that, as a screenwriter, Diablo Cody might be more than a flash-in-the-pan. I don’t think even a second viewing could convince me that Young Adult is a ‘great’ movie, but I’d like to give it the opportunity to try. That’s gotta count for something.