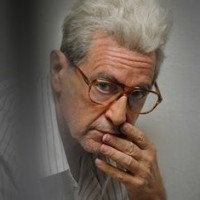 “You’re America’s quack now,” enthuses Neal Nicol (John Goodman), in director Barry Levinson’s biopic detailing the rise and fall of the man known by many as “Dr. Death” – Jack Kevorkian. It’s a fairly uninspiring entry in the genre, taking a strictly chronological approach and rarely straying from that path. The movie starts with Kevorkian watching his mother being kept alive by hospital staff against her wishes, and follows his rising name recognition as he implements a plan of physician assisted suicide based on the liberal policies of countries such as Holland. Later in the film, his sister is dispatched by way of heart attack, but the moment is not crucial to the story and is not given enough weight to leave any real scars on Kevorkian’s psyche. It’s something that happens, and the movie moves forward. This is a problem throughout the bulk of the film; it’s only saved by images of the character’s powerful zealotry pushing ever further toward madness.

There’s something to be said for the idea that Kevorkian (Al Pacino) fits the title that Nicol bestows on him. Another friend admits, “I love you, but all of your colleagues think you’re a nut.” And why wouldn’t they? This is a man who believes that keeping patients alive is a conspiracy on the part of hospitals and drug companies to squeeze every last penny from the victims’ families. When doctors eventually do remove the feeding tubes from comatose patients, he refers to their slow demise as equivalent to torture performed by Nazis. He sees himself as a living legend, standing up for an important civil and human rights issue – the right to choose one’s own fate – and puts himself on a pedestal alongside the likes of Martin Luther King, Jr., and Galileo Galilei. Regardless of the morality of his pursuit of physician assisted suicide, Kevorkian continues to “treat” patients long after his medical license has been revoked and bans on the practice have been enacted into law in his home state of Michigan. He does it in secret, in the shadows. The first patient he helps is given a lethal dose of poison in the back of his Volkswagen van, in the middle of the woods. Her husband leaves for a plane beforehand, telling her that it’s a precaution in case the police begin an investigation.

Kevorkian calls himself a “real physician” and argues that it is a doctor’s responsibility to provide the care that the patient asks for. But if a patient arrives at the ER and asks for a heart transplant, no doctor is going to readily agree. Indeed, as Kevorkian’s fame grows he indicates that not all potential patients are accepted and the film goes into a brief montage of sad-sack cases being turned away for not being terminal enough or for suffering from clinical depression and therefore being unable to make rational end of life decisions. It is with the help of Janet Good (Susan Sarandon), head of a surprisingly popular “right to die” group in the area, that Kevorkian presumably sets up the criteria which must be met in order for a patient to be accepted. But if the practice isn’t commonly accepted, how is it to be regulated? Though opponents’ fear-mongering speculation that Detroit will become “the suicide capital of the world” is clearly hyperbolic, who can say whether Kevorkian will feel compelled to take a patient’s life into his own hands, as it were, in the absence of the practice being legitimized through legal means. Kevorkian doesn’t see these arguments, thinking only that one has a moral obligation to disobey laws with which one finds fault. It gets to the point that he hides in a darkened vehicle a block away from a patient’s house while the police arrive, Nicol asserting, “We’re the good guys.”

Kevorkian readily agrees: “The criminals are the ones who are trying to stop us.” He later notes that he doesn’t care what happens to him in pursuit of the cause, a sentiment which sounds unsettlingly like the single-minded determination of a terrorist. Friends and family can insist that the doctor is the most honest and gentle person that they know, but for a man who is being put in charge of other people’s lives, these claims are just not enough. It’s all he’s got, though. The doctor initially says he knows that his suicide invention (the “Mercitron”) will work on the basis that he himself invented it. “I wish you had more proof than that,” Nicol clucks.

The film is at its best when it sidetracks the straight-up biopic and romanticizing of Kevorkian’s trade. After the doctor leaves his house, pushing through a throng of religious protestors, the camera sticks with him for a beat while a look of pained discontent crosses his face. One patient is “treated” using a minimal amount of the poison, a plastic box taped around his head in an effort to conserve as much as possible. Nicol expresses concern over the lengths to which the doctor is willing to go in pursuit of his craft, but Kevorkian isn’t willing to listen. The disconnect between the doctor’s concept of morality and the mechanics of living and working in the real world, in the United States, is driven home marvelously in a major court case in the final leg of the film. It leads to a deeply satisfying conclusion that neither supports nor repudiates the man’s beliefs about the rightness of euthanasia. I mean satisfying as the conclusion for the movie character Dr. Kevorkian, who for all his talk about morality is pinned by a larger philosophical quandary that he missed entirely by trying to take “one thing at a time”.

Pacino, as the good (?) doctor, is in top form here – a major boon considering conventional wisdom states that the man’s recent work has been less than stellar. He wears the character well, halfway between sweet older gentleman and demented loon. He can be calm and collected at one point, screaming at his sister in a crowded diner the next. We the audience are given reason enough to root for him because of the care he seems to take with his patients, telling them that it is ultimately their choice how to proceed. “You won’t offend me,” he promises, if they decide not to go through with it. But they invariably do – more than 130 times in total. The change in his demeanor over the course of the film comes subtly, if it wasn’t actually there from the start.

As a biopic, I suppose You Don’t Know Jack does its duty and tells the tale of the man’s life with relative fidelity to history. Whether his standards for selecting patients were as exacting as they are shown in the film could be debated, but his mindset overall is likely closely mirrored. The film reaches toward its greatest heights when it suggests that the doctor may have had an ulterior motive all along: an over-powering need to be right.