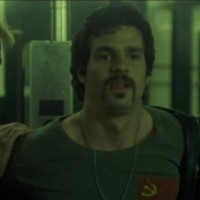 I watch a lot of bad movies. I sought out Tru Loved and The Undefeated in the last few weeks alone, just to submit myself to the unbearable and see if I could walk out the other side. Despite this habit (one might say hobby) of mine, there are few films I’ve seen that I find as repugnant as writer-director Austin Chick’s debut feature, XX/XY. The reason for this is not the unlikability of its three central protagonists, all self-obsessed and mind-bogglingly obtuse. Well, maybe that’s part of it. The primary reason that the movie rubs me the wrong way, however, is in the smug tone. No matter how uninteresting the plight of its characters becomes, the film acts as though it is cutting deep into the fabric of human emotion – and if you don’t think so, you’re just a philistine.

The main character – the XY of the story – is Coles (Mark Ruffalo). Yes, Coles. In 1993, he has a relationship with a girl named Sam, as well as her roommate Thea. At the outset, the three sneak off from the party they’re attending in order to have a failed ménage à trois. This is the main talking point that most will bring up when discussing the movie, as it serves as a brief prelude to the character dynamics the three will share throughout the rest of the film – and it’s also titillating. You see, because the experience does not pan out in the way it was intended to, the scene gains symbolic meaning. It’s not softly pornographic, it’s artistic! Speaking of artistic, did you know that Coles is an artist? One night, he and the girls, along with an unimportant secondary character named Sid, discuss what they would like to do with their lives when they are out of their college years. Coles is far from modest, saying, “I want to make movies.” What kind? “Movies that make people think.” As you might imagine, these words serve as a stand-in for Chick’s perception of what XX/XY really is.

Later in the film, we fast-forward to “present day” which is also “summer”. I’m a bit unclear on why the choice was made to go with that phrasing on the title card rather than “ten years later”, as the characters do suggest that it has been one decade since they last spoke to one another. Regardless, Coles is now the creative director at an advertising firm, which means that he creates colored-pencil animated advertisements entirely unaided, then meets with his bosses so that they can make minor critiques about the music he’s chosen. Whatever happened to those big dreams about making movies that make people think? As it turns out, our man Coles actually did write and direct a single film (sound like anyone we know?) but was frustrated by the creative concessions he had to make in bringing his ideas to the screen. Ha-ha, film industry! Bet you didn’t see that one coming! XX/XY isn’t afraid to tell it like it is. Thank god creating advertising campaigns is nothing like the film industry! Actually, Coles isn’t unaware of the way his bosses are always trying to stifle his creative vision: he sneers at them, swears at them, and just when they’re outraged by this behavior, explains that he was joking the entire time. But the audience knows that he wasn’t joking! See, this way Coles gets to have his cake and eat it too: he gets to sell-out and consider himself a misunderstood genius at the same time.

Of course, the movie is aware that there are some people who won’t find this song and dance amusing. In another act of that clever meta-commentary, a man approaches Coles at a coffee shop with seeming excitement over seeing a famous director. Instead, he asks for his money back for the ticket he paid for, noting that the man’s film was “morally reprehensible, especially the depiction of women.” Because the characters in this film, in the scenes which take place in 1993, have a very loose sense or morality and the women appear willing to have sex with anybody who walks by. These are the reasons you don’t like XX/XY, but you’re just a dummy who doesn’t get it. You probably don’t even have a girlfriend! Take that, armchair critics! The scene is supposed to be played for comedy, but it’s so clunky it’s painful. Ruffalo actually begins pulling money out of his wallet before the scene mercifully ends. But regular Joes don’t like movies that make you think anyway. You know who we mustn’t forget to hit? Professional critics who may respond negatively to the finished work. The film accomplishes this by having Coles and his friends raise a glass to this toast: “All critics should be brought to a pulp and converted into paper.”

So I guess it is the characters unlikability that turned me away, insomuch as the characters serve as mouthpieces for pompous self-righteousness. Yet even if this were something I could look past, there’s nothing underneath. It’s a student film without any sense of subtlety. Throughout the entirety of the runtime, scenes will suddenly go in slow-motion for a few seconds, then return to a normal pace. This is supposed to add style… I guess? In the most egregious example of this, it is 1993 and Coles tells his girl Sam that he loves her. She smiles shyly and looks away. Cut to Thea, in slow-motion, scowling and flipping off the camera (and, by implication, the two lovers). What? What is the point of that? An additional “artistic” moment comes when Sam leaves Thea’s apartment, stops and rests her head on the wall. She lifts it again and the camera turns to reveal that she is getting out of bed in her own apartment. Though equally showy, this is admittedly intriguing – but what purpose does it serve? No other disorienting changes in location or orientation appear in the film again. Why throw that in one time?

And then there’s the groan-inducing final act of the film, which (spoiler alert) is not happy. Because a depressing ending = serious movie, you should take this serious movie seriously! Coles is separated emotionally from one of the many XXs that seem to revolve around him, and the camera drives this point home in an overwrought manner, placing the actors on opposite sides of the frame (because they’re not connecting!) or having an otherwise joyful scene take place outside in overcast weather (because it’s an ironic juxtaposition and gray sky means bad mood!). And despite what other critics may tell you, the film is not salvaged because it “knows…much about human nature”. On the contrary, the characters act exactly unlike any actual human beings. They act in calculating ways which make no sense (“I was relieved you cheated on me because I wanted you to decide something”), or else make supposedly purposeful decisions in fits of spontaneity.

What I’m saying is that XX/XY is awful. But it doesn’t have the decency to be endearingly sincere – instead, it maintains a holier-and-cleverer-than-thou attitude throughout that makes it something worse than just bad: it makes the movie obnoxious.