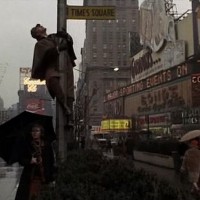 When thinking of 1971’s They Might Be Giants, the comparison that comes most readily to mind is to Arthur, released a decade later. That film starred Dudley Moore as a good-natured alcoholic, self-obsessed perhaps but with a heart of gold. In a similar manner, the psychosis of Justin Playfair (George C. Scott) is treated as an adorable malady – a great boon, at best, and something of a nuisance, at worst. The reasoning is sketchy, but Playfair has convinced himself that he is the legendary fictional detective Sherlock Holmes. He’s even aware that “he” is fictional, having knowledge about the book series, and is not perturbed by the evidence that maybe his true identity is this Playfair fellow. But the movie takes pains to romanticize the delusion rather than chastise or cast pity. At one point in the film, Playfair leads a band of admirers on a march through New York City at night, but I could only wonder how the group would react once they realize that there is no destination.

Not that this was intended as a sober drama about mental illness, mind you, and that’s fine. I was willing to play along with Arthur in spite of its habit of attending to its protagonist’s disease with kid gloves, and I’m not upset by it here. Playfair, as Sherlock, is a source of some fantastic bits of comedy such as when he meets a man at a mental hospital early on who refuses to speak. After a bit of deduction, he concludes that the man believes himself to be silent film star Rudolph Valentino. The revelation seems to put some credence to Playfair’s beliefs about his own identity, but the scene takes a turn for the hilarious when our man cautions a nurse, “There’s a strong possibility that he may not be Valentino.” It’s not the kind of stuff that will have the audience rolling in the aisles, but it’s good for a chuckle and a smile. Joanne Woodward, as Playfair’s intrigued psychologist Dr. Mildred Watson, is game for most of his shenanigans – following his “clues” to strange locales. They’re breaking into the telephone company one moment, meeting with horticulturalists who haven’t left their home in three decades the next.

Their whole excursion is an attempt to locate the dastardly Dr. Moriarty, Holmes’ sworn enemy and necessarily a figment of Playfair’s imagination. You’d imagine that Watson would be reluctant to follow Playfair around so readily, but it’s not just the film itself which romanticizes his affliction. When told that the man thinks himself Holmes, the good doctor nearly squeals in excitement. “A classic paranoid!” she cries out in elation, noting with fond wistfulness the last time she’d been around such a creature. She only attempts to cure him at times when at her wit’s end with his exploits, such as when the pair find themselves attempting to outrun the police after being seen roaming the streets with a loaded gun. Mostly, though, she seems to believe his endless pursuit of clues a fun game, hardly the way a doctor trained in mental disorders would be expected to react. In response, the film itself smiles in approval at Playfair’s assertion that though he may not be Holmes, it’s not folly to think so. After all, most people thought the world flat for a long time and found it ridiculous to believe otherwise. Don Quixote may have seemed a fool to believe that windmills are giants, but it’s wise to maintain caution because, you never know, they might be.

I’m fine with the movie making light of Playfair’s condition. After all, what’s funnier than a crazy person? What does bother me, however, is this bizarre moralizing. There’s a huge difference between holding the seemingly absurd belief that the world is actually round and holding the absurd belief that any windmill you come across may be a giant in disguise. For all his talk of being scientific and finding order and reason in the world he inhabits, the man clearly clings to the beliefs he wants to maintain while dismissing others despite mountains of evidence. Perhaps this is the true point of the film – to be a dark satire of this type of thinking. When I say “this type”, I refer not just to Playfair himself but to those who surround him and let him carry on with his delusions. As the film progresses, Watson is supposed to align increasingly with Playfair’s line of thought, and the film appears to set this up as a sweetness. They’re so cute together, look at how they clamber for clues in a nonexistent mystery! Could it be that They Might Be Giants wishes its viewer to cut past the surface and view the despair beneath? It’s possible: some have posited that the final moments of the film are in fact a bleak metaphor for death by ignorance.

But if this is indeed the intent, rather than me reading too deeply into a light comedy, it is not clear. The only character who shows any concern with Playfair’s state of mind is his brother, and his entire motivation is to get the man committed in an attempt to steal his estate. There’s not one sensible character in the whole cast. Everybody is blinded by Playfair’s charm, amused by his antics, impressed by his perceptiveness, or otherwise enthralled by him. That lack of critical judgment is a touch disturbing, a precursor to the bumper stickers that implore readers to “Question Reality”. There’s no virtue in questioning for the sake of questioning, nor believing for the sake of believing. Not all ideas are equal.

But please don’t misunderstand me – the movie is quite enjoyable, very funny. Playfair elicits painful screeching noises from a violin because he believes that, as Sherlock, he has mastered the instrument. A back-and-forth with a distraught woman and a no-nonsense telephone operator shines a hilarious light on the wicked tangle of bureaucracy. And if nothing else, the movie taught me what the word “groovy” really means (let’s just say it’s an adult term and leave it at that). But the purpose of reviewing a movie is not simply to say whether it is good or bad, but instead to discuss any thoughts that come to mind, to begin a dialogue.

I liked They Might Be Giants, but it is the film’s willing naivete that really concerns and fascinates me in equal measure.