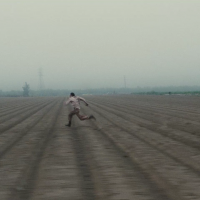 Paul Thomas Anderson’s latest, The Master, is typical of the director’s work since the turn of the century – dense, disjointed, and more than a little self-indulgent. It seems designed with the intent of frustrating viewers, so that by the time the film nears the end and religion/cult leader Lancaster Dodd (Phillip Seymour Hoffman) inexplicably sings a mournful love song to Freddie Quell (Joaquin Phoenix), the man he intended to fashion into his protégé, the moment hardly seems out of place. By this time, the viewer is likely to have abandoned trying to find some through-line to make sense of the events unfolding on-screen, a theme or idea to get some footing and start connecting with the movie. If The Master hadn’t been made by Anderson, whose debut feature I called “a masterpiece“, it might be tempting to write it off without a second thought.

No –  no, that’s not true. The film is brimming with a kind of wonderful, kinetic energy in spite of its aimlessness. Phoenix follows in the footsteps of Daniel Day-Lewis, who starred in Anderson’s previous release (There Will Be Blood), giving a performance which reminds me of critic Matt Brunson’s astute observation of Day-Lewis from five years ago: “I’m not sure [his] performance represents the best acting…but it certainly represents the most acting of the past year.” Hoffman, too, is unrestrained in his commitment to the role; not to mention Amy Adams, in a role that is less front-and-center, but which nevertheless provides a few moments in the spotlight. In addition to the actors’ ability, the cinematography of the thing is, in a word, gorgeous. Anderson has always had an eye for broad shots, ensuring that there is no shortage of stunning tableaux throughout. See Quell splayed out on an upper-level of a ship, the camera looking down upon him while sailors dot the deck like ants and the crisp, blue water of the ocean fills the outer edges of the frame. Watch a riverboat, lit up with raucous partiers and with a large American flag on the back, disappear into darkness beneath a bridge. It doesn’t even have to be anything out of the ordinary – a wide shot of two cars parking in front of a stately Victorian home and spilling out a huge family is unbelievably rich, an image to savor – I have no idea how Anderson (along with cinematographer Miahi Malaimare, Jr.) have developed the skill and foresight to find such magnificent shots.

And finally, there’s the score by Jonny Greenwood (lead guitar for Radiohead), a component of the film so fascinating and singular that it deserves its own paragraph. The score makes itself known, with a clacking wood-block and seemingly chaotic strings winding around many scenes. And yet soon, it becomes easy to forget that the score is there; even as it continues its discordant noise, the sound becomes so typical that it fades into the back of the viewer’s consciousness. In truth, it simply fades into and out of the action as necessary, in a fashion that reminded me strongly of Dario Marianelli’s Academy Award-winning score for Atonement – which itself glided coolly in and out of the images on-screen with an awe-inspiring grace. The scene that comes to mind most readily for me is shortly after the prologue: Quell flees a job as a cabbage-collector and finds himself wandering along a pier (once again, a wide shot keeps Quell on the left side of the screen while the camera tracks along with him, revealing the riverboat mentioned earlier. As Quell gets closer to the boat, the jubilant sound of a brass band rises as the score fades, aiding the transition between the prologue and the first act in winning fashion. And yet, try as I might in scanning the boat, I didn’t see the band. People are dancing, drinking, and laughing while the horns blare, but the musicians are nowhere to be seen. I have to conclude that the sound of the band is as much a part of the score as the off-time wood-block is, but it feels so natural that it’s easy to overlook. In fact, while trying to get a grasp on what the film was trying to accomplish early on, I suspected that the few times when a scene was absent music altogether had to be important. The first example of an entirely silent scene comes in the outstanding “processing” scene between Dodd and Quell – a scene, I might add, which is so powerful that it alone almost makes up for the errors of the film otherwise. The silence increases as the film progresses, proving my suspicion about its importance wrong, but having those thoughts attuned me to the ever-present sound of the score in a way that I might not have otherwise, and which allowed me to truly appreciate its role in the film as a whole.

Yet the story lacks the immediacy and reach needed to maintain interest. At its surface, it tells of Quell’s severe alcoholism (he seems to honestly prefer paint thinner to beer) and the way that Dodd, with great patience and soothing words, attempts to replace that addiction with “The Cause”, a religion that Dodd himself founded, and which some of the more skeptical in the community are want to identify as a cult. The majority of the film focuses on the struggle between these two men, Quell at first taking to the persuasive words of Dodd, whom his followers all refer to as ‘Master’, then rebelling again. Beyond a belief in reincarnation, it’s unclear what “The Cause” is about and it’s tempting to believe that this is intentional, that “The Cause” itself is not the point. But the meaning behind the tumultuous relationship between Quell and Dodd is never directly revealed, and their on-again-off-again commitment to one another tends to add to the exhausting nature of the whole enterprise. I am sympathetic to Roger Ebert’s complaint that, “All around the film’s edges are possibilities that Anderson doesn’t explore.”

The Master is not a movie that invites thought and individual interpretation, so much as it requires it. At least in Terrence Malick’s Tree of Life, which I know many found to be similarly obtuse, the characters were presented as archetypes and many of the images shown were clearly symbolic. In contrast, The Master forces its audience to make their own metaphors. Ultimately, the parts – which are uniformly terrific – are far better than the whole. One a scene-by-scene basis, Anderson is unquestionably at the top of his game; if only I could approach the film with only that standard in mind. Yet for a five-star film, the parts must not only work in harmony, they must work together toward some greater goal. Rather than a goal, The Master just has a wall.

One Response to “The Master”