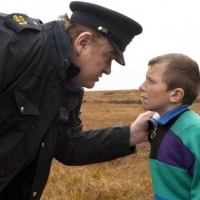 From first-time director John Michael McDonagh, brother of Martin McDonagh – writer/director of In Bruges – comes a film that reminds me of a lower-key version of something by Edgar Winter (Shaun of the Dead, Hot Fuzz). A buddy cop movie with cops who are barely buddies, the film has a blast tweaking the tropes of the genres it apes to hilarious effect. But of course, as everybody before me has already noted, the success of the film lies largely on the shoulders of its star Brendan Gleeson. There have been innumerable bad-cop-with-a-strict-moral-code types throughout the history of cinema, but Gleeson nails his character’s personality cold: enigmatic, sarcastic, free-spirited.

We begin with a murder scene, and though killings are an unusual circumstance in the sleepy Irish town where Sergeant Gerry Boyle (Gleeson) keeps order, he approaches the scene with a clinical eye. Given that “5 1/2” has been painted on the wall, his partner suggests that it may be a reference to the Fellini film, or else it may be the work of a serial killer notating the number of victims he’s dispatched. “He might have just maimed one,” the police officer suggests, “Cut off his legs or something.” It’s not long before Boyle finds that his murder case has strong ties with an international drug smuggling operation. A shipment of cocaine worth half a billion is on its way to the Irish coast and this victim turns out to be one of the men suspected of carrying out the plan. Thus, Boyle finds himself teamed up with an American FBI agent named Wendell Everett (Cheadle).

Everett is go-for-broke in his pursuit of the drug runners, whereas Boyle takes a much more lackadaisical approach. Everett is flabbergasted when his new partner takes a day off for vacation, noting that it has been booked for months, in the middle of their investigation. Further, Boyle makes a slew of extremely racist remarks under the guise of naivete (“I thought black guys couldn’t ski. Or is that swim?”) and makes absurd claims with steely-eyed seriousness. He’s so difficult to read that Everett announces that he cannot decide whether the man is brilliant or a total idiot. But somehow he retains some charming essence in spite of his insensitive joking, perhaps because we get to see the gentle way the lumbering man relates with his cancer-ridden mother or because of his almost paternal chiding of a local boy who seems to have no parents otherwise.

Meanwhile, the film makes no bones about the fact that the bad guys are in town and looking for trouble. One member of the group is an admitted sociopath – don’t call him a psychopath, although the difference between the two terms is lost on him. When assigned to take out a competing agent, his associates complain about the length of time it is taking and wonder whether he’s fallen back into that old habit of torturing his victims. One man helpfully explains that it’s not a habit, it’s a psychological imbalance that leads him to need the rush of protracted violence. These aren’t your typical baddies: they don’t sneer and twirl their mustaches deviously. They do carry guns, of course, but otherwise are more prone to philosophical discussions about the nature of their trade or trading trivia about Bertrand Russell than they are to doing otherwise villainous deeds. In fact, were it not for their casual murdering of civilians, it’s unclear whether Boyle would feel compelled to track them at all. He tells Everett that he’s going to arrest the men for multiple homicides, “and for the lesser charge of drug smuggling”.

But what makes the movie so riveting is in the sweeping comic moments, such as a scene where the baddies exchange a duffel bag full of money and one has the nerve to ask that age-old question, “Is it all there?” The argument that ensues is one of the highlights of the film. When Everett and Boyle catch up with the men they’ve been tracking, they go in knowing there’s a chance that they could be shot or killed. “Does it hurt?” Boyle asks, of being shot. Everett gives him his usual slack-jawed stare, uncertain whether or not the Irishman is making a terrible joke. As the drug runners are confronted by a lone traffic cop and prepare to gun him down, they marvel at the way the man accepts his fate. “He took that well,” one says to the other, over the still-bleeding body.

Overall, The Guard is a fast-paced and verbose comic gem. It plays for gut laughs with a straight face, but manages to hold an element of dramatic power that allows its ambiguous ending to come across as artful and moving. And it is artful – the film makes the most of sparse landscapes, speaking cinematographically. Fading from the back of Don Cheadle’s head looking out at a burning ship in the night to a gray ocean scene in the cloudy daylight makes for a hard-hitting visual, and even as the film dips into its final moments the humor does not let up – including multiple callbacks to events which happened previously in the film and Cheadle responding to a child’s suggestion that Boyle was a good swimmer, “I’m sorry, son, but that was just bullshit.” I never knew swearing matter-of-factly to children was so funny.

Like his brother before, John Michael McDonagh has made an endlessly entertaining and quietly heartfelt film that is sure to become a classic. Packed with sharp wit and a larger-than-life star, it’s a real joy.