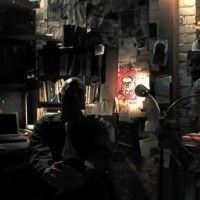 In honor of director Timothy Chey’s insane Suing the Devil, which I will be reviewing soon, here’s a review I wrote some time ago for a brain-dead earlier effort from the man…

According to an excellent A.V. Club piece from late last year on The Genius Club, the movie was debuted at the prestigious Cannes Film Festival. That’s an incredible thought, since the movie pretty blatantly exudes the direct-to-video spirit. It’s a low-budget thriller which refuses to believe it has a low budget, complete with bad actors and a script to serve as nails in the coffin.

The story is simple enough. Seven people, all of whom have IQs over 208, are summoned to a secret basement to meet with the President of the United States. It seems that there is a madman who has planted a bomb eleven blocks away from the White House and is threatening to blow up half a million people in D.C. unless this group of super-geniuses can solve “all of the world’s problems” in one night. Of course, the world’s problems will be graded on a point-scale – if the seven geniuses reach 1000 points before morning, they will live.

The thing that the A.V. Club review of the movie points out constantly is that these alleged geniuses act like complete idiots. They’re handed elementary-school riddles, but scratch their heads trying to come up with an answer. “A man rides into town on Friday, stays three days, and leaves again on Friday. How come?” But it’s not just that. The movie takes the form of a philosophical discussion. Instead of questions asking how to, say, prevent wars from breaking out, the questions are set up more like this: “All wars have been a reprehensible waste of human life. Discuss.” That wouldn’t be so bad if there were any genuine thought behind the answers given. Instead, there’s a string of weird conspiracy theories about how cancer hasn’t been eradicated yet because the medical community benefits from the disease. In a flashback, a man whose wife is dying of cancer rails at a doctor: “The rising mediocrity in this country is profound… go back to your magazines and your television shows!” Why don’t we have an electric car yet? Because the oil companies shut the development down, which proves that we are not living in a democratic republic here in the U.S., but instead in a “quasi-Communist state.” What?

This is all pretty stupid. When government agents approach the genius pizza delivery guy (played by Stephen Baldwin), he quips: “You guys are way outside my delivery area.” A character who is defined by little else besides his occupation! Amazing. Later on, a baseball player is shown tossing a baseball in the air. Does he really travel with a baseball on him at all times? One of the government agents seems to have a past relationship with the bomb-wielding madman, but nobody presses him on it. Some geniuses. Their relationship is alluded to countless times, but if anybody ever asks what the hell is going on, it’s just shrugged off. Oh, and the President – an obvious Bush proxy who at one point claims that he is trying to take the country back to an age of ethics and morals and marvels that “some people believe I <i>wanted</i> to go to war” – continually gets derisive glances from the geniuses who believe that he intentionally cut cancer research because, I dunno, he hates cancer patients. They are pointedly ignorant of the way that the political process works, ignoring the valid point that there may have been additional politically-charged riders on the bill which made it unsuitable.

Okay, yes, yes, the movie is bad. But the reason I sought this film out is not because of the taut plot or the chilling thrills. No, no, I sought it out because I was looking for the high that comes from watching a terrible Christian movie. Unfortunately, The Genius Club doesn’t whip out the Christianity until near the end, and once it does it only trots out the weakest and tritest of arguments – stuff that is only convincing if you have never ever ever heard a counter-argument before. “Atheism is a religion,” the genius seminary student claims, “because it takes as much faith to believe that there isn’t a god as to believe that there is.” The madman awards 100 points to Gryffindor for that thought, as though it were original or convincing. The seminary student goes on to conclude that everybody has faith because they remain inside of buildings, exhibiting their faith that the building won’t spontaneously crumble and crash down on top of them, killing them instantly. Do I really need to tell you that there is a huge difference between believing that a building won’t disintegrate around you and believing in an omnipotent, omniscient, omnipresent creator deity?

The madman presses the geniuses: can you prove that there is a god? A cancer researcher takes a stab at it, asserting that the earth is set in space at precisely the right angle to support life. If it was tilted just a few degrees to the either side, we would all burn up or freeze to death. It pains me that I feel obliged to address these idiot arguments. Obviously the world has the perfect conditions for life – we exist! That does not prove God’s existence. What would better point to the existence of a god is if we existed even though conditions were completely unsuitable for life. Whatever. Back to the seminary student, whose argument is even more dumb. He points to a passage in Romans, which essentially boils down to, “Look at the sky! Look at the trees! That means God exists!”

The most interesting moment in the film comes when our resident atheist, pizza-delivery boy Baldwin, wonders how a good and loving god could exist in a world filled with so much despair. The typical answer for this is quickly provided: bad things happen because we are sinful. Sorry lady, your kids got run over by a drunk driver because they deserved it.. or God was trying to bring you closer to him.. or we can’t understand God’s plan. The majority of the geniuses in the room seem content to nod along with this, but Baldwin suggests something radical: “Maybe God is evil.”

“NO! GOD IS GOOD, MAN IS EVIL!” the seminary student fumes. It’s the closest thing to true emotion that the movie has the ability to convey. He doesn’t even bother trying to back up this statement in any way, expecting everybody to take it as a given. And they do. Nobody brings it up again. Even Baldwin’s character refuses to press the subject. But then again, what were you expecting? This is a movie that hinges on philosophical discussion, but is unwilling to actually have any sort of meaningful discussion. The characters’ lines are stupidly scripted; there is no sense that anything said is organic at all. This isn’t a meeting of the minds, it’s a mess.

All of which is to say that The Genius Club is pretty terrible. It’s a lazy Christian film and a worthless thriller, boring and brain-dead. There’s really not anything positive that can be said about the movie, honestly.

One Response to “The Genius Club”