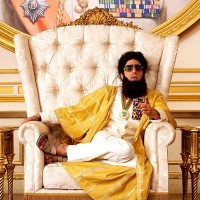 It was a chore to sit through The Dictator, Sacha Baron Cohen’s latest comedy, because it is sorely lacking in comedy. A friend who saw the film with me compared it to one of the works of Jason Friedberg/Aaron Seltzer (Epic Movie, Meet the Spartans), which I find particularly apt. Where Friedberg/Seltzer get by simply recreating recognizable facsimiles of pop cultural characters or moments and call them “jokes”, Cohen’s film relies mostly on simply being racist but calling it comedy. Beyond the racism, the comedy is so weak it makes me think it’s time to send Borat back to Kazakhstan.

Other critics are comparing The Dictator – in favorable terms! – to classic works by Buster Keaton, the Marx Brothers, or Charlie Chaplin. This last comes up especially often, referring to Cohen’s role as a despotic ruler of a make-believe African nation as a parallel to Chaplin’s role in 1940’s The Great Dictator. While the one is likely intended to be seen as referring to the other, the low branches that Cohen picks from make for a far less essential picture. Where Chaplin’s film took on Adolf Hitler just prior to the start of World War II, a controversial move at the time, Cohen’s attacks dictatorships in general and has very little to say about them. In a stunningly simple-minded speech, Cohen makes the case that the United States is more similar to a dictatorship itself than a democratic republic, but the idea comes across as less profound revelation than teenage political exaggeration. The movie stops just short of saying “The United States is worse than Hitler”, but only just. It’s not this sentiment that does or does not influence my opinion of the movie, but the sloppy way it’s handled.

Cohen’s previous films benefited from the actor taking his characters out into the “real” world, as it were, doing a type of guerilla mockumentary that showed actual Americans reacting to his broad stereotypes. These were invariably the best portions of the previous films, the scripted material typically much weaker (and really stretching for laughs). The Dictator is fully fictional, a damaging move that was done partially because the actor has gotten too famous in the U.S. Unfortunately, without the “anything goes” atmosphere that those previous films employed, this latest entry feels slick and slight. There’s no excitement in King Aladeen (Cohen) being falsely exiled from his palace and forced to work at a natural foods store, nor is there any in a peasant (Cohen again, obviously) taking over the leadership role. Because the movie is entirely fictional, because the way the world reacts to Aladeen (or the “imposter Aladeen”, for that matter) holds no consequences whatsoever, it becomes impossible to care for the characters. What, is the United Nations going to send bombers to massacre the people of Aladeen’s country? The worst possible outcome of anything that happens in the film is that the King will be made to look like a fool.

To compound the miserable lack of story, Cohen’s sense of humor is far from sophisticated. He has the imposter Aladeen stand in front of the United Nations – on national television, no less – and urinate into a water pitcher. That he then drinks it goes without saying. Newscasters try to decode the “message” that the King is trying to send by doing this, and when he accidentally spills the urine on another country’s representatives, it appears an aggressive act. Hilarious? Another example: speaking in his country’s native language with a compatriot, the true King discusses what a poor house-guest Osama bin Laden is. Only, the conversation takes place during a plane tour of New York City… with a frightened white couple on board. See, they think he’s talking about Osama bin Laden, when in fact he’s really talking about.. um.. Osama bin Laden. That the pair then awkwardly incorporates a sentence or two about a Porsche 911 (the couple hears only the phrase “nine-eleven” in English) and race to see who can count down from 5 the fastest only drives home the point that had already been made: Cohen, and his writing team, are idiots. There is nothing clever about any of the above. I am tempted to call it “immature”, but that gives the impression that, at the very least, they’re still jokes. The writing in The Dictator falls short of even that.

Then there is Aladeen’s love interest Zoey (Anna Faris), perpetually ignored, actively humiliated, or publicly insulted by the man. And yet she fawns over him nonetheless because she’s been written as such a spectacularly stupid character that suffering continuous verbal abuse can’t make a dent. It’s all in good fun, right? Like when Aladeen pulls back the corners of his eyes in order to pass for Chinese, it’s just a fun bit of comedy and very socially conscious. It’s not racist! It’s a statement about people who are racist! That statement, it seems, is “come see this movie – you’ll love it!”

I literally just got through writing a review for director Jason Reitman’s Young Adult, a movie which features an unlikable protagonist. I felt that committing to the main character’s self-centered attitude worked well in that film because it upset the expectations of the genre, and because the resigned acceptance of those around her made the character’s condition all the more tragic. The Dictator manages none of that pathos – it doesn’t even manage to match that film’s dark humor regarding its subject’s egocentricity. It makes everybody an idiot and sets up Aladeen’s unrepentant disdain for women and minorities as an endearing facet of his colorful personality. It doesn’t have anything to say about its protagonist aside from “isn’t he funny?”

Aladeen, it is said, changed over 200 words in his native language to “Aladeen”, including the words for ‘positive’ and ‘negative’. This gives the opportunity for a brief skit wherein a doctor regretfully (or is it happily?) informs a patient that he is HIV Aladeen. Haha! What confusion! Someone thought this was something other than D-grade comedy culled from the dregs of any amateur improv club… and then they made it into a movie! How could anyone possibly be that confused?