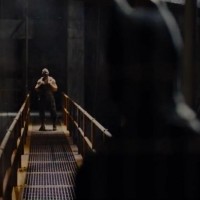 When I wrote my review for the naturalized romantic comedy Friends With Kids, I eschewed talk of the major plot to focus on the smaller things that I found more intriguing. The discussion about the final arm of director Christopher Nolan’s ‘Batman’ trilogy has been similarly limited, and I don’t intend to break that tendency here. I do want to draw attention to it beforehand, though, because I think it speaks to the reasons that Nolan’s films work, even if the parts sometimes do not feel cohesive. People don’t want to talk about the film, as much as they want to talk about their thoughts about the film. That’s far from a criticism. It would be easy to brush off this excited, continuing conversation about the strengths and weaknesses of the film, calling it the talk of geek fandom, but no such conversation was sparked by other popular geek-friendly titles, e.g. Sam Raimi’s Spider-Man series. Raimi’s films actually gathered a lot of similar praise to Nolan’s work here, insomuch as both have been lauded for their gritty portrayal of what is essentially a cartoon character. The difference is that Nolan’s work lends itself to philosophical debate. That’s more than can be said of most action films.

So The Dark Knight Rises opens with Bruce Wayne (Christian Bale), having spent eight years in seclusion within his massive home, finally being tempted out into the light by the rise of a new criminal force sweeping the streets of Gotham City. This crime wave has been orchestrated by a behemoth of a man who goes by the name Bane (Tom Hardy). Bane is physically menacing, all muscle and Hannibal Lecter style mask, but he’s a mental terror as well. He speaks with the voice of an aristocrat, even as he snaps your bones, and his ultimate goal is not just to destroy Gotham City and the Batman, but to break them both totally. In conversations with Batman, Bane describes his plan: to give the city the hope that it can weather the impending storm, only to crush that hope once again. Contrast this with the actions that Batman took at the end of this film’s predecessor – allowing the maniacal Harvey Dent to be seen as an upstanding man of the law whose life was sacrificed for the good of the city, allowing himself to be viewed as a villain for the greater benefit of Gotham. Much like Bane, Batman gave Gotham a false hope, but for radically different reasons.

So it is any wonder that viewers want to talk in terms of metaphors and symbolism? Wayne himself speaks in cryptic terms about the symbol that the Batman could be. He is fond of reiterating the concept that the Batman could theoretically be anybody because, as stated in the first chapter of the trilogy, “It’s not who I am underneath, but what I do that defines me.” To this end, much of the film is dedicated to Bruce Wayne being himself; he is banished by Bane to a Middle Eastern prison that confines its captives not with bars and locks, but instead by being at the bottom of a gigantic pit. This leaves Commissioner Gordan (Gary Oldman) and a keen cop called John Blake (Joseph Gordon-Levitt) to fill the Batman’s shoes, to do what they can to save the city on their own. Anyone could be Batman, to the point that one must not actually be Batman. That is, the only thing separating John Blake from Bruce Wayne is a lot of gadgets (and ninja training, of course). Their anger, their drive for justice is comparable, and so it’s easy for Blake to serve as the lead throughout much of the film.

Later, Batman notes that if Blake intends to fight crime, he’s going to need a mask – to protect not only himself, but the people he loves. For anybody attempting to save Gotham, though, the mask is an exercise in futility. When the thing you love is not a person, but a place – not a person, but a concept – a mask is not enough to save those things from coming under attack. The things that Batman loves are Gotham City, justice and fairness. Bruce Wayne, on the other hand, has his own personal demons to work out (hence the self-imposed seclusion). He cared about Rachel Dawes, and little else. Much like the duality between Bane and Batman, there is a duality between the desires of Wayne and Batman. There’s the opposing forces of Chaos and Order in The Dark Knight, the opposing forces of Pain and Strength in this film. Is it any wonder that the thing which draws the dividing line between 1) the idealistic Batman of the first half of the trilogy and 2) the Batman who is willing to make concessions for the greater good in the second half is a man who is literally split in two?

There’s even more that I could go into concerning the fate of Bruce Wayne, but suffice it to say that there are multiple strands of thought here that are not just invented by the audience but instead invited by the movie. It is an action movie, of course, and there are plenty of pulse-pounding sequences to name. In particular, the initial meeting between Batman and Bane in the sewers is a real treat – one that only grows in impact when seen in the epic IMAX format. And yes, there are plenty of holes that one could poke in the narrative structure to show that the movie as a whole doesn’t “make sense”, if one were in the mood to do that. However, I think that above it all, The Dark Knight Rises functions as an adrenaline-fuled summer blockbuster while at the same time retaining a sense of thoughtfulness, a sense of moral curiosity. This is the kind of rounded experience that is missing entirely from other summer flicks (-cough The Avengers cough-), which makes Nolan’s film something special.

The Dark Knight Rises may not be the most thoughtful film you’ll ever see, or even the best in its own trilogy, but it’s more than a blockbuster is expected to be, and that makes it kind of exceptional.