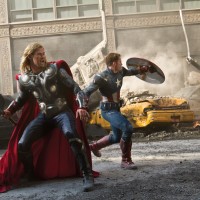 Over the past few years, several films have been released to introduce the world to Marvel comics’ cache of superheroes, ostensibly to familiarize the viewing public with the characters individually prior to the blockbuster blow-out that would be their eventual teaming up as the indefatigable band of virtue, The Avengers. The release of the film of the same name had a lot riding on it, theoretically, because it was expected to one-up the other films by packing six times more action and pathos into its run-time than any of the others. Six primary characters, six strong personalities to work with and create a compelling and comprehensible story. It’s a big task.

Or it would be, if anybody was expecting that. As I wrote in my review for Captain America last year:

So though The Avengers comes from the mind of writer/director Joss Whedon (“Firefly”, “Buffy the Vampire Slayer”), a man who has amassed a cult following based on his prior work, it could have just easily tried a lot less and likely gotten the same response from fans. In truth, though the film has some unexpected bursts of humanity in some of the smaller character interaction, most of the large-scale battle sequences and plot mechanics are built on a shaky foundation at best, and at worst rely on the audience’s willingness to ignore their disbelief entirely. There are multiple instances where goals are edited straight to their conclusion, and one particularly daft bit of plotting relies on the audience not realizing that the concept was lifted directly out of a Looney Tunes short.

The movie begins with Nick Fury (Samuel L. Jackson), ringleader of the shadowy government organization known as S.H.I.E.L.D., accidentally loosing Thor’s evil brother Loki on the planet by not understanding the immense power of the er, I mean.. er, I mean.. Tesseract. In response to our planet’s imminent demise, he calls together a group of good guys to form the Avengers, each with their own individual powers and dramatic backstory. There’s Bruce Banner/The Hulk, Black Widow, Captain America, Thor, Hawkeye, and Tony Stark’s Iron Man – and though they want to work together, their differing opinions on how best to handle the situation leaves their attempts at teamwork feeling slightly off-balance. Loki’s plan for world domination makes no sense at all (something about getting a monster to open a portal to unleash an army of Putties), but luckily there’s enough explosions and general confusion to keep things looking to be on the up-and-up. It wouldn’t be a super-hero movie without such confusion, now would it? Hence, police cars tumbling through the air after being thrown by baddies, fire in the streets, citizens running around wildly, buildings being destroyed – all in service of easy action sequences showing the Avengers doing what they do best. The Hulk, jumping off of buildings and grabbing the bad guys in mid-air, Hawkeyes flinging exploding arrows at their chests, Thor and Captain America swinging hammers. It’s a spectacle, yes, but the purpose is so poorly defined that the exercise feels perfunctory.

Though, to be fair, there is one incredible sequence where the camera whip-pans from one of the Avengers to the next until all have been seen fighting in tandem to save the world. What makes the moment work, I think, is that there does seem a plan for how the camera will move between the characters, switching at the exact moment when they cross each others’ paths, in a manner that orchestrated in a much more artistic manner than any of their individual exploits. This is the closest that the group comes to a team, so it’s appropriate that the moment stands out. And again, in the human interaction between them there is more range than in battle. Tony Stark and Captain America have an initially respectful attitude toward one another which grows fractured as each begins to understand the other’s motivation – Stark’s enthusiasm rooted in egoism, the Captain in old-fashioned ideals about self-sacrifice. Though neither Black Widow nor Hawkeye were afforded a stand-alone film of their own, their hinted back-story and questionable relationship makes for an intriguing aside every now and then, and of course Bruce Banner’s struggles with the rest of the group, S.H.I.E.L.D., and even himself make for the most exciting character of the group.

It’s just too bad that, when Banner finally reveals the secret to containing his alter-ego The Hulk, it is little more than a quip. Black Widow and Hawkeye fall victim to this trap too (“You remember Budapest a lot differently than I do”), and in fact most of the film’s “humanity” comes not in knowing the characters’ feelings based on their stories but instead in the fact that they are interacting verbally at all. Agent Phil Coulson (Clark Gregg) from most of the previous movies, becomes a more rounded character here not because we understand more about him, but because he gets more dialogue… and a few good quips, naturally. Stark and Banner have a brief conversation about being able to overcome limitations and use them to your advantage – and though the conversation may be clunky lead-in to Banner’s controlling The Hulk, it’s a striking moment because the characters are talking to one another. Not talking at one another in a you-say-your-line-now-I’ll-say-my-line fashion (exemplified by the stilted way that Cobie Smulders reads all of her lines), but instead talking to one another as though they are actually listening to and internalizing what the other is saying.

It’s amazing that finding a few small nuggets of artistry or intelligence between the lines can make one feel like the film was a success overall. Yes, The Avengers has some funny moments and of course it is action-packed, but those things alone are not enough to set it apart from other super-hero films or even the characters’ individual stories. What sets it apart is brief, and limited, and is surrounded by a mindless plot that strives so hard to sound intricate. In short, it’s an appropriate send-off for the team of heroes: stirring together their personalities with a shot of comedy and a sprig of authenticity, lightly referencing deeper themes to add a sense of importance.

Is The Avengers a good movie? Yeah, it’s fun, it’s okay. It’s just enough to get you back for the next one.