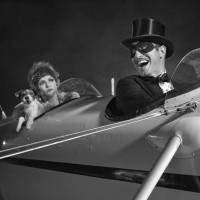 There’s one spectacular, joyful, life-affirming scene in director Michel Hazanavicius’ The Artist which makes the entire film work, but it comes at the very end so I won’t go into specifics. The rest of the film is playful, energetic, mildly self-referential, and thoroughly pleasant even if it fails to deliver hard-hitting dramatic ruminations on the relationship of its male and female protagonists, or about the toll that the transition to “talkies” took on silent film stars (or just anyone whose role has been made irrelevant by technological advance). It’s a breezy comedy which even approaches a couple of near-death experiences as fodder for humor, sharpened somewhat by some impressive shot compositions and appropriately expressive performances from its leads.

We are introduced immediately to silent film star George Valentin (Jean Dujardin), whose James Bond type character is being electrocuted by the Soviets. “I’ll never talk!” he says, but here’s the joke: The Artist is itself a silent film. Ergo, Valentin’s words are shown on-screen in white font on a black card much as you’d be likely to see in a film of the late 1920s. It’s a cute joke for the viewer and also provides a bit of foreshadowing to the struggle the actor will have when sound comes to town in a few short years. For now, however, Valentin is the biggest name in Hollywoodland, to the point that an aspiring actress who “accidentally” drops her autograph book and gets “accidentally” pushed onto the red carpet with Valentin becomes a sensation just by virtue of being seen with the star. “Who is that girl?” headlines read, with word about the actual movie being shot relegated to the fifth page. As it turns out, that girl is Peppy Miller (Bérénice Bejo); after this brief encounter, she lands bit parts and cameos until her fame has risen to the level that she is top billed in all of her features. With her gorgeous smile and presumably enchanting speaking voice, she transitions easily to the talkies while Valentin finds himself cast aside by the same industry he once commanded.

Let me break for a moment from simply describing the plot of the movie (who am I, Donna Bowman?) to provide a bit of a personal anecdote. When I first got into movies – not just watched movies, but became a fan of film as a medium – my favorite film was for a long time the Alan Ball penned Best Picture winner American Beauty. I found the blend of dry humor and socially conscious drama compelling, but even more than that I was attuned to the artistry on display in the film’s production. I could gladly point out to you all of the clever bits of mise-en-scène and symbolism that set the film apart from the pack. Did you notice the shot of Angela crying on the staircase, the rain on the window distorting the pale moonlight shining in on her face, the bannister of the staircase symbolically forming bars in front of her – because she’s captive to her “normal” life! I thought that this sort of thing made the movie more intelligent and was therefore willing to overlook the painfully cliched characterizations of some of its characters.

Years later, now a famous film critic and more familiar with the work of Alan Ball (thanks to “Six Feet Under”, “True Blood”, and the god-awful Towelhead) and director Sam Mendes, the two men’s quirks are easier to see. The symbolism which at one time felt poignant and electric now feels contrived, the use of broad stereotypes far too simplistic. I don’t think of the movie as the greatest story ever told like I once did, but I can still remember why I had such positive feelings toward it and I don’t begrudge my past self for it.

I don’t mean for this to be an unofficial review for American Beauty, so let me skip to the point I’m trying to make. I can imagine being sixteen years old and seeing The Artist for the first time and being absolutely stunned by it. The silent film conceit is used to great effect throughout, particularly in a shocking dream sequence and in the juxtaposition of telling the story of the first “talkie” films without actually including any audible dialogue. There’s winking jabs of awareness in scenes such as the opening I described previously, or when Valentin’s perpetually ignored wife pleads with him, “We need to talk.” On top of this, Hazanavicius and his crew find multiple unique and dazzling shots: a mirrored image of Valentin drinking alone and pouring the liquid out in a ring around his reflection; the wide shot of Valentin and Miller meeting at the midpoint of a busy staircase; Valentin, standing behind a movie screen, staring in awe at his own image fifty feet taller. And finally, there’s sly bits of metaphor littered throughout the movie: the direction the two movie stars are moving in the staircase scene represents the trajectory of their career paths, the image of savages pushing Valentin backward with spears in his final film correlates with his feelings of being pushed out of the business, the dance that Valentin and Miller share in their first on-screen pairing an astute bit of two-pronged foreshadowing, one prong of which is the coming revelation that she will unintentionally cause him to lose his place in a much broader sense (by replacing him as the biggest star at Kinograph Studios).

As a famous film critic, I see these instances of metaphor and intentional foreshadowing all too easily, and they appear as meager attempts to add weight to a fluffy work. I can still appreciate some of those look at me choices in the cinematography, but find myself questioning the ease with which the many challenges the characters face eventually play out. But if I were just falling in love with the movies for the first time, The Artist would be a fine first fling. It’s a celebration of the history of the medium which plays gently with convention (e.g. adding brief moments of sound, allowing a character to be unexpectedly profane, referencing its own limitations) and delivers a heartwarming story. There’s also a cute dog that does tricks. What more could a guy ask for?