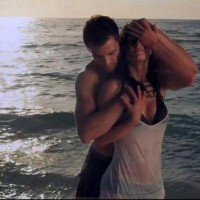 Okay, I’ll admit it. When I first saw the original Channing Tatum-led Step Up, it managed to hit me at the exact right place and time. I was still heavily into the television show “Lost” and as a result my thoughts were on heavy topics like fate. When I watched Step Up 2 the Streets, I took those thoughts and uncovered even more by way of thematic contrast with the previous film. Part of the reason for this is that I was taking notes while I watched the movie – something I actually don’t do as frequently as I’d like to – and consequently I was looking for the things I wanted to say about the movie while I was watching it, keeping an eye out for a specific take to report back with. Thus, I’ve considered myself a fan of the series and when I first saw trailers for the fourth movie in the apparently never-ending procession of Step Up titles, I literally jumped up and down and squealed like a little girl. My wife can verify this.

Speaking of my wife, I convinced her to give Step Up 2 the Streets a try before going to see the newest film because I had hoped the experience would make her a convert and convince her to join the screening of Revolution with me. Unfortunately, re-watching that film without the excitement and concentration of my first viewing left both of us cold. What had once been a sublime eagerness to see where they would take the dance saga was quickly replaced by an anxious sense of obligation. I had been talking up Revolution for months; it would be impossible to back down now.

As expected, the plot of the film is a rehash of many other titles. Lower-class Sean (Ryan Guzman) works at an expensive hotel during the day, but at night leads a group known as “The Mob” which creates public flash-mob dances to post on file sharing websites. Sean has a meet cute with Emily (Kathryn McCormick, who incidentally reminds me strongly of the star of a different ‘dance movie’, Christina DeMarco) at the outdoor bar of the hotel, challenging her to a dance-off without knowing that she is the daughter of the greedy real estate developer who owns the hotel. The two trade their best stripper moves and fall instantly in love. I say “stripper moves” because that’s exactly what their dancing consists of; there is a scene later in the film wherein Emily takes the lead on one of the Mob’s performances and spends half of the performance grinding a lap dance on Sean’s knee. If this is what dancing means in Miami, I can understand why Emily’s father would disapprove.

As luck would have it, her father’s development plans include tearing down a swath of property that serves as home and hang-out to Sean and his pals, a business venture that would leave them temporarily homeless. The Mob feels compelled to stand up against this outrage by changing their tactics: instead of performance art, it’s time for some protest art! With seemingly limitless resources on their hands, the group shows up Em’s dad (Peter Gallagher) by dancing in business suits and throwing fake money. Ouch, I’m sure that metaphor cuts so deep. While this is going on, Emily is also auditioning for a prestigious dance school and isn’t sure whether she has the chops to make it. Will Sean be able to boost her self-esteem, save his neighborhood, and develop an obligatory romance with the female lead… all while walking the tightrope of jealousy that has formed between himself and his best friend as a result of this new romance?

Maybe it’s because, try as I might, I could not find any themes within the movie that resonated with me – all I could see were the weak elements of other, better movies stolen and pasted together to build this mess. Maybe it’s because the dancing was all-around flavorless and unexciting. Maybe it’s because there was no chemistry between the two leads, or because events happen not because they make any sense (e.g. Sean’s friend getting mad at him once he finds out that Emily is the daughter of the real estate tycoon… in spite of the fact that she has done nothing but support their attempts at demolishing the development plans). Take your pick, but whatever the straw that broke the camel’s dance, there is nothing of worth in Step Up Revolution. Even the 3-D is perfunctory, failing totally to match the exuberant over-abundance of items flying at the camera from the previous installment. The movie seems so hastily put together that the finale seems like a joke (you won’t mind if I spoil it, would you?) – with Emily’s dad softening as a result of seeing yet another dance (but this one really counted!), and shaking hands with Sean while promising to “build up the community without tearing it down”, explanations for how in the hell they’re going to do that be damned. Or wait, maybe he said “blow up the community”? That makes a lot more sense.

And in the most insulting moment of the film, a representative from Peter Gallagher’s PR firm approaches the kids from the Mob and tells them that one of his biggest clients is Nike and they want to do something super different! with their new marketing campaign and they think that the Mob is exactly the kind of image they want to cultivate. The kids unanimously demand a dotted line to sign on, throwing out the window any and all ethical quandaries they might have about linking up with a giant corporation mere moments after defeating the nefarious plans of a similar company. You might imagine that there would be a moment of hesitation while the group considers the ramifications of this move, but you my friend are over-estimating Step Up Revolution.

No worries. I also over-estimated Step Up Revolution, and that’s saying something because I went in with expectations that had already been deflated by simply re-watching one of the earlier entries in the series. I will admit that the climactic dance sequence on the pier that finally softens Emily’s father is pretty cool, yes, and a surprise cameo by Moose (the lead from Step Up 3) is somewhat exciting for those like myself who have been following the series. But then I think back to the one character who nobody has ever heard speak, the one who breaks this self-imposed silence in order to say “I got it” with regard to costumes. Aren’t characters who never speak supposed to say something enlightening when they finally do?

I guess I can thank Step Up Revolution for finally allowing me to understand why people laughed at my previous devotion to the series. It was entirely misplaced.