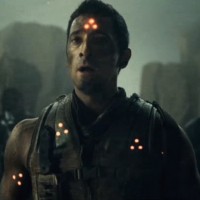 Maybe I would have reacted differently to 2010’s Predators if I hadn’t just finished watching the horrendous Aliens vs. Predator: Requiem days before. In comparison, the former feels like respite from the cold, emotionless challenge that the “versus” movie provided. Here we have a group of human characters who we actually kind of, sort of get to know a little bit. The Predator characters have motivations beyond looking cool. There are actually some legitimately creepy moments (I’m thinking primarily of a scene that has Danny Trejo with his back to the camera – you’ll know it when you see it). All of this added together makes for a far more satisfying movie than its immediate predecessor.

We are introduced to a motley cast of characters, each a cold-blooded killer who has been brought to a mysterious jungle without any memory of how they were brought there. Royce (Adrien Brody) quickly takes charge, and with a little sleuthing soon determines that he and his comrades have been brought to a strange other-world in order to serve as game for a hunt. Yes, much as in previous installments of the Predator series, the title creatures have only sporting on the mind, but this alien world is a new twist that yet again opens the floodgates for questions about this alien race. Is this their home planet – it seems unlikely from the brief glimpse we saw in Requiem – and if not, how did they come to possess it? How intimately are the Predators familiar with Earth that they are able to select specific humans to participate in this hunt? What technology allows the Predators to abduct individuals and wipe their memories with such ease? I’ve been asking similar questions through five films in the series now, and while I enjoy being able to raise these questions, the series’ continuing refusal to answer them is growing wearisome. Part of this is my own fault, I know, because I couldn’t just accept the Arnold Schwarzenegger led 1987 film as the mindless action flick it wanted to be… I had to pin ideas about morality, comprehension, sociology, and philosophy to the thing. I thought at the time that if I didn’t, I would find nothing of note in the series as a whole. That’s probably still true, but looking for answers in a murky swamp of action sequences has left me unsatisfied still.

Nevertheless, Predators is not terrible. At first glance, the casting of Adrien Brody in what is ostensibly the Schwarzenegger role (or the Danny Glover role, if you’re nasty) seems a huge mistake. It doesn’t take long for Brody’s newly-chiseled physique and Christian-Bale-as-Batman gravelly tone to overcome a viewer’s initial objections. It’s true that the group of baddies that he’s leading generally fail to conjure much in the way of emotional investment, but the decisive way that Royce barks orders at his team and the gritty determination on his face at all times keeps things exciting. Once the Predators arrive on the scene, there is of course a great deal of adrenaline-pumping combat to augment Royce’s soft-spoken leadership as well. There’s an explosion-riddled scene at the Predators campsite, and a wonderfully eerie scene that has nerdy botanist Edwin (Topher Grace) lighting flares in a darkened corridor, the menace of the potential attack thick in the air the entire time.

But then, why was a botanist selected along with this band of tough guys? While the gang sets about trying to find answers to why they are here, why they (as a group) were selected, what their captors’ plans are, and so forth… somehow they neglect to ask possibly the most important question of all: why is a botanist here? To be honest, the movie itself doesn’t really know how to answer that question, twisting Edwin’s character suddenly to serve bizarre, incomprehensible purposes. Speaking of bizarre and incomprehensible, my friend Chris Meier raises an additional head-scratcher of “how a planet with a sun that doesn’t move (as the protagonist informs his group and us) can have a nighttime or even inhabitants that aren’t extra crispy cadavers.” Is the planet fabricated? There’s really no indication that this is even a possibility, but I just want to twist some sense out of this. But then again, if I have to put up with a movie that is bizarre and incomprehensible in exchange for a sequence where the member of the yakuza faces off against a Predator in a tranquil meadow at dusk, each armed only with a single katana, well…

Well, maybe I was wrong to discount the possibility that the Predator franchise might be able to offer enjoyment on a purely action-oriented basis alone. I mean, Predator 2 does have a gruesome scene where multiple dead bodies have been skinned and hanged from the ceiling of a penthouse, not to mention the UV-enhanced freezer showdown that allows the creature to really show off its maneuvers. And the original, of course, has its instantly classic final act and a plethora of still-quoted one-liners. I do still long for an entry in the series that spends more time exploring the Predator culture (actually, the two “versus” movies come closest to answering these questions of any of the films so far), but maybe it is okay to just sit back, relax, and enjoy the oh-so-bloody ride.

Or rather, maybe that’s the only way to enjoy the oh-so-bloody ride, or to get any real satisfaction out of it. To expect nothing more than a general re-hashing of the original film’s plot, but with a minor twist (it takes place in Los Angeles! It takes place in Antarctica! It takes place in Colorado! It takes place on another planet entirely!) to give it a sense of individuality. I’ve been weighing the Predator series against the Alien franchise, largely because I started the former only as a supplement to the latter, and that has colored my perception of every film thus far. Which is to say that each installment in the Alien franchise has been singular and provocative and thrilling. The Predator movies may be thrilling, but only that. I suppose that, in the right light, they might look alright… but to me the series remains slight.